Now I actually wanted to check out other reviews of Red State before I started my own...Not that I doubt my own opinion but something was niggling me and I wondered if I had missed something. 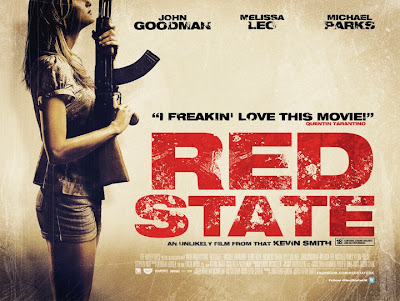 Sorry guys but I'm not feeling the vibe. Maybe you have to be a Kevin Smith fan? I'm not.

"It's some scary film about crazy Church people against gays"

A bit of controversy close to home?...Interesting...

Three college guys make the wrong move when they accept an anonymous invitation to engage in group sex with a mysterious woman they meet on-line, only to be kidnapped and trialled in an extreme fundamentalist Church/Sanctuary (Five Points) led by a delusional Pastor, Abin Cooper.

Agent, Joseph Keenen, hears of the disturbances happening at Five Points and decides to take necessary action on the well known fundamentalists.

The issue of homosexuality and God in Red State makes a promising start. Witnessing members of Five Points protesting at a gay man's funeral certainly got me angry.

"Bastards" I muttered under my breath. Having said that, the anger I had built up, soon diminished.

I was preparing myself for a pretty intelligent and disturbing view of the controversial issues that surround homosexuality and the Church. But instead, I was left a little confused.

Kevin Smith seemed more interested in how far he could stretch 'extreme', so much so that I'm not even entirely sure of the points he was trying to make. 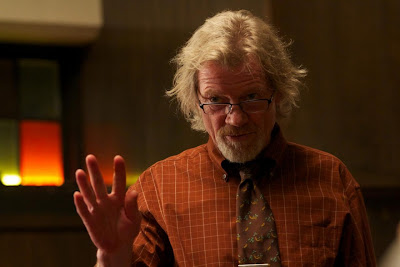 Abin Coopers 'famous' twelve minute solo sermon for example, was just too long. It felt like a pretentious tool to tick a box and claim itself to be 'daring'. Similarly, the overly acted nods of approval from his followers (including children) made me cringe and diluted the already weak impact of his words.

If Smith really wanted to get us angry...It didn't work. I simply got bored.

Personally, films that deal with such controversial issues have enough juice in their system to spark an emotion without having to over indulge in typical filmic codes and conventions. In regards to Red State, I found myself questioning why it slowly began to dip it's toes into the horror/action genre unless it wanted to pump it's viewers with energy, a few jumps and squeamish moments...Sound like a typical popcorn job to you? 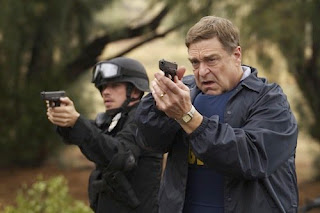 Amongst the trials and questionable executions, the story develops slightly (if weakly) when Agent Joseph Keenen and his team close in on the Sanctuary.

We learn that Five Points is quite well known and forces have been waiting for the chance to take action.

Unfortunately, the way in which this information is executed and the following investigative steps seem like a wasted opportunity to learn more about fundamentalism in general. It exists in the real world as a debatable and controversial issue so why sprinkle it with shoddy details and ballistics? Again, pass me the popcorn. 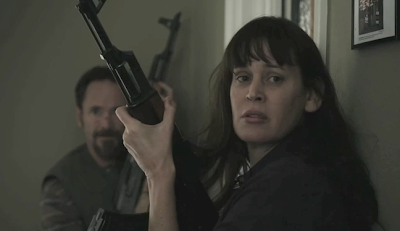 Speaking of ballistics...John McClane and GI Jane have absolutely nothing on our middle aged Church goers. The whole uber-religious fighting force amazingly have the knowledge to reload and fire huge shiny guns...I get that Kevin Smith wanted to make these guys seem psychotic but there's only so much extreme you can do before things start to become a little too unrealistic.

Although I seem to be slating the horror/action genre of Red State, I am simply doing it with the consideration of it's context. In terms of dramatic effect, there is no denying that Red State has some exhilarating scenes, even I felt my legs twitch.

Similarly I have a slight admiration for the lack of predictability and the mercilessness of it's 'main' leads. Having said that, if you're someone who likes to bond with a character...I very much doubt that's going to happen.

During a ridiculously long stale-mate shoot out our main agent, Joseph Keenen is told from the top to eliminate every person within the Sanctuary, including victims, to cover up some horrible flaws within the police force.

It is at this point where I began to lose sense of the point to Red State. 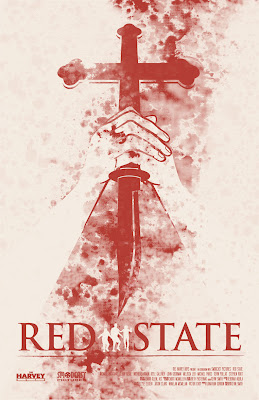 What was once a narrow-minded view of fundamentalism and homosexuality now becomes a confusing statement about America's law enforcement...I just didn't get it.

Not only this but the approaching ending gave me quite a surprise. I actually stopped slating the film and began to wonder whether I had been successfully manipulated into a solid opinion and was about to fall on my arse but.......no, it was wishful thinking.

Kevin Smith must be an enquired taste.

At the moment he's my marmite.

Red State could have been a juicy film that intelligently dealt with controversial issues, struck anger and hit a nerve with a lot of people. Instead, it chose to depend on extremities and guns.

If you enjoy the odd scare, machine-gun bearing mothers and gore, Red State is highly recommend.

If you're one for the contrary, I hear 8: The Mormon Proposition is a pretty good watch....