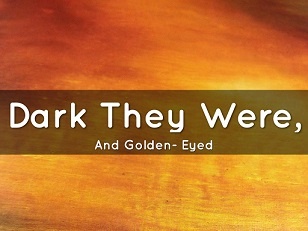 Ray Bradbury was a famous American short story writer known for his science fiction and technological fantasies. I happened to read his short story Dark they were and Golden Eyed. It is a story of a family that went to Mars with many other people on a rocket to escape the destruction and brutality of war on earth.

Harry is the protagonist in this story and he has a wife Cora and three children. About a thousand people arrive on Mars via rocket and start living in abandoned houses of Martians. But somewhere inside them they have a fear that they are aliens here and if by any chance natives find them, they might get harmed by them. But this was not a very big issue as compared to the climate of the Mars. Harry wanted to leave Mars but could not. He had no rocket and tried to build a rocket by himself but was not successful.

Mars’s climate was very harsh and severe and was imposing impacts upon Earthmen. It caused many great changes and finally colors and physical features of people changed. They even started speaking language of Mars.

After a few years, when a rocket from earth once again came upon Mars to find these people, they found nothing except a dark Martian creature that lived in hills and was very friendly.

Bradbury has told this story in a very elegant way and has drawn a fascinating picture of the fantastic world of Mars which is very intriguing and marvelous. I have loved this story since my teenage and still like this and it haunts me whenever I remember any excerpt from this fable.