Review: The Place Beyond the Pines 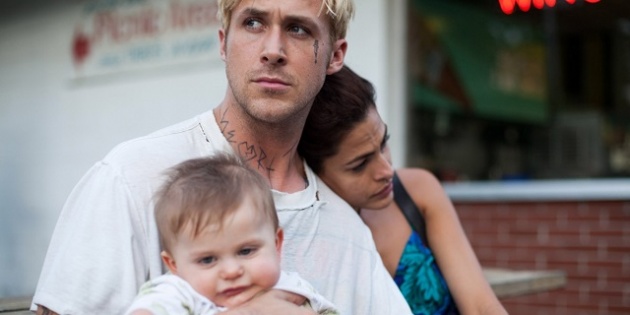 It is said that the path to hell is paved with good intentions. In this tale of fathers and sons, hell just may be the best they can hope for.
Luke (Ryan Gosling) lives his life completely uninhibited as a stunt rider in a traveling carnival. Luke being introduced by his profession is an important note, his trade is not a spectator sport for its grace, people watch Luke because each time he steps into that cage, he could die.
This evening in Schenectady is like any other, that is, until he sees Romina (Eva Mendes). The two had a brief, but passionate fling and he hasn't seen her since. He wants to reach out, though it's too little, too late. Luke drops Romina off, yet something keeps him from leaving town. He comes back the next day to find a son he never knew about. The moment he found out he was a father, Luke quits the road.
Money is hard to come by for an out-of-work carnie, he is taken in by an auto mechanic (Ben Mendehlson). Robin has only seen talent like Luke's maybe a handful of times, he rides like lightning. Robin has robbed four banks before, and he stopped before he got caught. He offers his system to Luke, if he wants to provide for his new family, he can do it quickly.
Robbing banks comes with its own set of circumstances. Luke isn't just riding in a steel cage anymore, the ride is not choreographed, and those men waiting for him will put him in prison. Men like Officer Avery Cross (Bradley Cooper).
There is a speed at which movement is impossible to comprehend and the eye is just frantically throwing pieces together. Some would complain that everything is a blur, but the visceral thrill from taking everything at the speed Luke sees is unmatched in white-knuckle intensity. Sean Bobbitt captures these chase scenes beautifully.

Place Beyond the Pines shifts narrative focus several times over the course of the film. Once finished with Luke's story, Derek Cianfrance places Avery under his scope. Avery starts out as a beat cop, but with his family pedigree (his father is a former Supreme Court Justice), that won't be the case for long. If he is to do so, he must navigate the waters of his department, waters filled with sharks like Lt. DeLuca (if there is a face that suggests a lack of morality more than Ray Liotta's, I haven't seen it).

Are some just predetermined to be successes or fuck-ups? Jason (Dane Dehaan) never knew his father, but the paths he and A.J. Cross (Emory Cohen) are about to cross will irrevocably change both families.

Cianfrance could have coasted off the success of Blue Valentine, but with Place Beyond the Pines, he delivers a much more ambitious picture. Instead of capturing the love built and lost between a husband and wife, Cianfrance sweeps the camera over a city and generations of men who enforce the law, men who break it, and those for whom that line is grey.

It's not an indictment, but a well-acted display of whether or not our lives are determined by fate, or our own choices.

For free movies to watch online, watch more videos at my WebTV channel