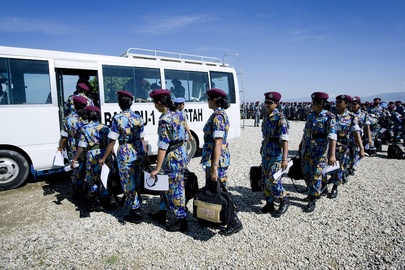 UN will move ahead with investigation of at least 2 cases of sexual exploitation of children allegedly committed by its police personnel in Haiti. The first case involves UN Police (UNPOL) officers based in the capital, Port-au-Prince, while the second case involves one or more members of the Formed Police Unit (FPU) in Gonaives, UN spokesperson Martin Nesirky told reporters in New York. (These cases were originally reported in early September, at least through UN system.) “The United Nations is outraged by these allegations and takes its responsibility to deal with them extremely seriously.” He added that the police contributing countries concerned have been informed. However, unlike cases involving UN military personnel, investigations into allegations involving UN police personnel fall under the responsibility of the UN. For this reason, a UN team was dispatched to Haiti on Saturday to investigate the allegations. As we had experienced in Bosnia & Herzegovina. The UN asserts immunity on behalf of “peacekeepers” in effect for their countries. It is a system, in my opinion, which will need greater oversight – See our Article from September 7, 2011 Below. “”Did UN Peacekeepers Rape Haitian Young Man?” The UN Stabilization Mission in Haiti (MINUSTAH) stated in a news release that an investigation was immediately opened after the allegations were made. The UN Police Commissioner also relieved the two suspects of their duties as a precaution to prevent them from having any contact with the population and to prevent any attempts to interfere with the investigation. Female Police Units/Officers: UN has been ramping-up efforts to deploy more women police officers/units – it is way to provide greater confidence among local women/girls as well as enhance new role models. It may also serve to deter from an “all-boys” club atmosphere. Above Photo is An all-female Formed Police Unit from Bangladesh, serving with the United Nations Stabilization Mission in Haiti (MINUSTAH), arriving in Port-au-Prince to assist with post-earthquake reconstruction. “Zero Tolerance”? “I want to reiterate my commitment to uphold the policy of zero tolerance of abuse by the staff of the Mission” said Mariano Fernández, the Secretary-General’s Special Representative and head of MINUSTAH. “Each member of the UN personnel, whether he or she is a civilian, member of the military or police, must observe a standard of exemplary conduct. “This is a commitment that is required when joining the United Nations, anywhere in the world. We will continue to take the strictest measures to ensure, where appropriate, that the perpetrators of such acts are punished with the utmost severity.” The UN also has a strategy in place to assist victims of exploitation and sexual abuse. In Haiti, MINUSTAH implements it in coordination with other UN agencies and national stakeholders. This mechanism is meant to guarantee that the victims receive medical and psychological support as fast as possible. There have also, unfortunately been many instances, some may say chronic levels, of sexual violence in IDP (Internally Displaced Persons) Camps. See Film Report – “Sexual Violence in Haiti Camps” - diplomaticallyincorrect.org/films/movie/sexual-violence-in-haiti-camps/24266 By Ambassador Muhamed Sacirbey Facebook – Become a Fan at “Diplomatically Incorrect” Twitter – Follow us @DiplomaticallyX “Haiti Emergency” Channel - diplomaticallyincorrect.org/c/haiti-emergency Twitter – Follow mo @MuhamedSacirbey From September 7, 2011 Article : “Did UN Peacekeepers Rape Haitian Young Man?” According to media reports, the incident in question involves the alleged rape of an 18-year-old Haitian man by Uruguayan peacekeepers. A video captured on a cell phone camera showing the alleged assault reportedly surfaced recently The UN offered that Uruguay should conduct a full and thorough investigation into allegations of sexual misconduct by its military personnel serving with the world body’s peacekeeping mission in Haiti. Eduardo del Buey, Deputy Spokesperson for the Secretary-General Ban Ki-moon, said a preliminary probe carried out by the UN Stabilization Mission in Haiti (MINUSTAH) “determined that it was necessary to instigate a full and thorough investigation” into the alleged abuses committed in Port-Salut. “Under the procedures agreed between the UN and troop-contributing countries, it is now the responsibility of the Government of Uruguay to conduct the investigation, with the full support of the UN,” he told reporters in New York. The UN has imposed a zero-tolerance policy against sexual abuse and exploitation by its peacekeepers, and senior officials have reiterated in recent years that this means there is no impunity for blue helmets who engage in such practices. It is the responsibility of the troop-contributing country to take appropriate disciplinary and judicial measures if the allegations are found to be true. (Above is from UN News Centre Sources) Based upon the experience of the citizens of Bosnia & Herzegovina and my work at the UN (Ambassador Muhamed Sacirbey) as well as other circumstances of alleged misconduct, we do not believe that it is prudent to only rely upon the home state of the alleged perpetrator. Whether perceived or not, there is a potential conflict as most UN peacekeeping contributing states would want their soldiers presented in the best possible light, as much or more so as in a combat zone. The state hosting the peacekeepers may or may not be functionally capable to address the issue, but regardless the serving peacekeepers are generally afforded immunity in the host country. It is appropriate that the UN conduct its own investigation or perhaps designate the International Criminal Court to insure impartiality and urgency to the process. Otherwise, the crimes will be repeated, other UN peacekeepers may become unfairly smeared by such alleged abuses and the UN and its many worthy missions may suffer by perceived association and lack of accountabilit

MEDIA, GOVERNMENT, POLICE AND PUBLIC CRUSHED THE REBELLION IN TURKEY