Struggle for equality was set to music 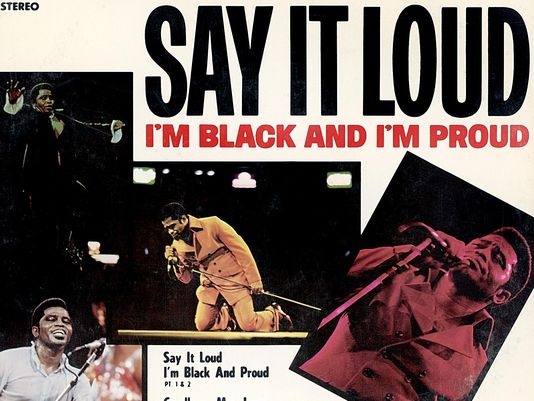 "Say It Loud I'm Black and I'm Proud" is a single from James Brown's 1968 album on the King Records label.(Photo: USA TODAY)

Never has the power of song been as evident as it was during the civil rights movement of the 1960s.

"The music was very instrumental, and it helped the races connect during a time of bigotry and racism," said Syl Johnson, 77, who released the single Is It Because I'm Black in 1969. White parents "wouldn't let the kids listen to the records (by black artists) ... but they hid under the covers, listening to the songs on transistor radios, and when they grew up, bigotry disappeared. It's still here, but R&B and soul music was very, very instrumental in bridging racial gaps between black and white."

Songs of the era helped the races communicate with each other — and helped people of the same race communicate, too.

"There was a tremendous push back against direct action and activism. Dr. (Martin Luther) King had to leave the National Baptist Convention," said the Rev. DeForest "Buster" Soaries, a former New Jersey secretary of State and mentor to such artists as Whitney Houston and Jessica Simpson. "When the music comes in ... it's church music with a slight variation. Its culture is rooted and grounded in the church, and people were used to hearing it, and the artists were coming out of the church."

In the early 1960s, the songs of the movement were gospel or Negro spirituals with politicized lyrics, said Bob Santelli, director of the Grammy Museum and curator for the White House's A Celebration of Music from the Civil Rights Movement concert in 2010.

"These were songs that African Americans already knew," Santelli said. "They knew the melodies, and the power of the songs served as a rallying point. They embedded a sense of courage, and they gave people clarity of the mission. The music was absolutely vital."

Though it originated in church, music of the civil rights movement first gained a national foothold in the folk scene of the late '50s and early '60s through the work of artists such as Pete Seeger, Odetta, Bob Dylan and Joan Baez.

"As a young kid, you'd listen to music informing you and inspiring you with a political slant," Santelli said. "A Dylan song was like reading the editorial page of the newspaper."

Sam Cooke was inspired by Dylan's Blowin' in the Wind to write his landmark rights song A Change is Gonna Come.

"Sam wanted to make a contribution to the civil rights movement," said Cooke's great-nephew Erik Greene, author of Our Uncle Sam: The Sam Cooke Story From His Family's Perspective. "Sam was a person who sang in the segregated South, and he refused to go on before a segregated audience. He refused because the black patrons were all in the back in the balcony. He said give them all their money back."

A Change Is Gonna Come was written and recorded in 1963 but released as a single after Cooke's death in 1964. It has a gospel foundation with biblical imagery (a river), yet it's fused with modern imagery (a movie). The song became an anthem for the movement. 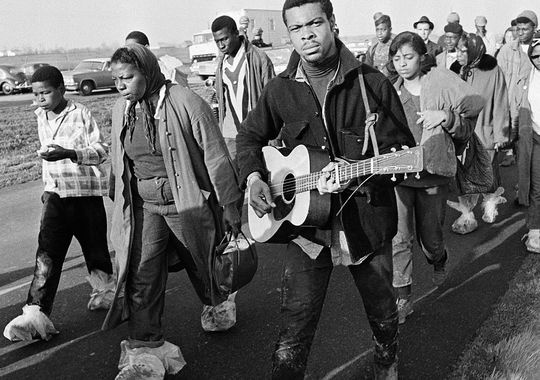 Their feet encased in mud from their rain-soaked encampment, civil rights marchers trudge along Route 80 near Montgomery, Ala., on March 24, 1965, as they started out on the fourth day of the march on Alabama's state capital . Playing his guitar as the marchers plod with him is Jimmy Collier of Chicago.(Photo: ASSOCIATED PRESS)

People Get Ready, the 1965 single by the Impressions, had a similar gospel foundation, with references to a destination in Jordan and an invocation to "thank the Lord." Curtis Mayfield, a future solo star, wrote that song and others, including Keep on Pushing in 1964 and We're a Winner in 1967 for the Impressions. "These songs came from deep down inside of him," said Mayfield's widow, Altheida Mayfield. "I have to give him credit: He was so young when he stepped up there at a time when others wouldn't step out there."

That era's music was fundamentally different from today's.

"There are two types of poetry, descriptive and prescriptive," Soaries said. "The descriptive poet describes conditions as they are — the vulgarity, the criminal element. They're just describing our reality.

"The prescriptive poet looks at reality and dreams beyond that reality, and he uses his power to motivate and expand the reality for others. In the '60s, we had this whole chorus of (prescriptive) poets, particularly in R&B. The whole R&B movement was aligned with the political and social struggle of the day."

"A song like Say It Loud – I'm Black and I'm Proud is a far different song than what had come just a few short years before," Santelli said. "It was a great barometer of change. Aretha Franklin singing Respect wasn't exactly a civil rights movement song, but it was more activist: 'Yes, give me that respect.'"

The tone of the music was changing from wistful optimism to pointed declarations. Even groups that had previously recorded mainstream hits started to get involved. The Temptations went from My Girl in 1964 to the 1969 album Puzzle People, which featured the tracks Message From a Black Man and Slave.

Johnson, whose hits include Different Strokes and Take Me to the River, wrote Is It Because I'm Black in Chicago immediately after King's assassination in 1968.

"He was shot trying to help the garbage workers (on strike in Memphis)," Johnson said. "I never marched — I didn't believe in marching — but I wanted to give credence to the one they were marching for. I wanted to put up a flag, a sign, and let people know."

The success of the song did have a drawback, as far as Johnson was concerned: "The young college kids, the white kids and the black ones, ate it up. It put a damper on the performance. The girls used to run and jump and scream, and now they didn't. It was now a very serious testimony. They didn't jump anymore. They sat there and looked."

The songs of the Black Power movement would not last much beyond the early '70s.

A new message was coming in the form of the Kenneth Gamble-, Leon Huff- and Anthony Jackson-penned For the Love of Money, a 1973 hit for the O'Jays that's familiar to many TV viewers today as the theme song for Donald Trump's The Apprentice.

"The whole theme of that O'Jays song is if you don't have money, you're not equal," Soaries said. "It forces you to confront the economic reality more than anything else."

By the mid-1970s, songs of equality and social justice went elsewhere — to Bob Marley in Jamaica and Fela Kuti in Nigeria, for example.

"The message was still there in the music," Santelli said, "but now it was against racial oppression in the world."