Going Back to 1998, the first time (maybe the last) that Jamaica was in the World Cup, we, in this part of the world, knew a lot; A LOT about Jack Warner and about Sepp Blatter.

When you live in a kakistocracy like Jamaica corruption is simply our form of governance.

Unlike nations which may have a corrupt official or two, our system of governance is corruption, just like the metric scale is based on meters.

Sepp Blatter was known to us from the first day he entered office until the day he was forced out.

To say Blatter was corrupt is to say water is wet.

We knew, all those nations in the 3rd and 4th world knew, and those who didn't want to know didn't have to.

There is a particular problem with voting.  Often people vote against themselves because they don't grasp the issues.  A government which wants to raise taxes, for example, might lead off with a 'reduction in income tax'.

The people will vote for a reduction in income tax forgetting that the money to fund the various governmental institutions and programs has to come from somewhere. If income tax is lowered so that instead of garnering X dollars from the contributors it will gain X - Y dollars, than those dollars have to be found somewhere else.  Hence, as Income Tax drops by 5% the taxes on goods are raised by 7%.   This replaces the lost 5% and gains an extra 2%.

When it is 'one person/one vote' than those persons who make up the majority win.  All one needs to do is focus on the majority and what they want, and ignore the minority and they win.

If every  football federation in the world is a member of FIFA and every Federation has 1 vote, then Haiti has as much say as France, Togo as much as England.

This seems fair until one realises that one vote for each member is not exactly fair.

How Blatter Did It

To bribe people in the 3rd and 4th world is almost 'pocket change'.  To Bribe them by appearing to be beneficient is how Blatter played it.

For him to give $10,000.00 US dollars to some official of FIFA in a 4th World Country is over One Million Dollars.   For this money he insures a vote.

There are 211 members of FIFA.   That means all Blatter had to do was buy 106 votes to insure he was elected.

Considering the amount of money he had at his disposal, and the value of a Euro or US dollar in the 4th World, it would cost about $1 Million  U.S. dollars.

Of course, he didn't have to buy everyone.

Firstly, he showed more attention to African nations than any other official of FIFA.  He made sure they got various grants to 'Develop Football' and fed the egos of those who held voting positions.

Many of those in the 3rd and 4th World looked up to him as the Great Benefactor and for the price of dinner at a fancy hotel, he owned them.

When a Con Man walks into a room, he knows why he is there.  He has prepared everything in advance were he hired for the evening's lecture.  He knows where the money is, how to get it.

He knows what to say and who to say it to, and how.

FIFA was a fat goose waiting to be cooked and Blatter, who never had any connection to football in his life, went after the Presidency with great effort and focus.

He knew he was there to make himself rich and that is all he cared about.  He would do the 'work' as a side line, but to fill his pockets was his impetus. 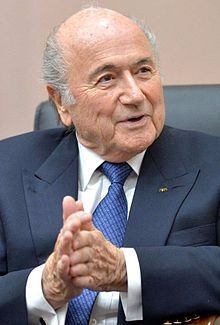 As time passes more of the corruption of Sepp Blatter is revealed.  As any Con Man he plays as if he is innocent.  It is as if he believes if he keeps saying it that enough people will believe it.

Having spent nearly Eighteen Years filling his pockets, he has certainly provided for his old age.   He has nothing much to worry about.  He has a silky tongue, a winning smile, and who would believe that this old man was as corrupt as can be?

He has insured that the World Cup will be in a place thoroughly unsuited to hold it; that Qatar.  Why place it there when so many better locations are available?

Soon enough the money trail leading from Qatar will lead to his door.

But Blatter has always been fairly lucky.  He'll probably die before he can be prosecuted.