The Making of DTS Sound Signature 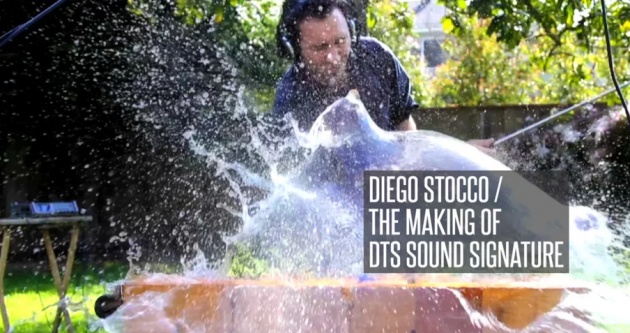 The Making of DTS Sound Signature by Diego Stocco. Diego is a composer, music sound designer and performer, He creates eclectic compositions with custom built instruments, elements of nature and experimental techniques.

In this making of video you'll see some of the recording sessions Diego did when he created the DTS Sound Signature. He sound designed sounds out of milk, lentils and water balloons. For the musical parts Diego wanted to include tracks recorded with old pianos. He like their way of being uniquely out of tune, when combined together the result is a fuller and more interesting sound.

Diego had the fantastic opportunity to collaborate again with DTS, Inc., this time to create the new DTS Sound Signature. For this production he came up with some new recording and sound design techniques he didn't try before. The video and pictures shows how he was golfing water balloons and extracting massive sounds from milk, lentils and barley. By the end of the video you'll also see the finished Sound Signature.

The microphones were so close to the milk that Diego couldn't avoid getting them hit by the drops, but that's also why he was able to capture such detailed sounds from the milk. A beautiful sounding API 10 slot lunchbox with four 512c Preamps, two 550b EQs and four 527 Compressors. It's when Diego started to crank up the setting on the EQ and Compressors that he heard that deep sound coming from the milk. It's the spinning sound you can hear at the end of the sound signature.