The Making of Ode to a Post-it Note: Part 2

Creating Ode to a Post-it Note was a really fun journey for me.  In essence I was the Post-it Note character on a journey to meet the inventor of the Post-it Note, Art Fry.  The entire film was shot chronologically.   I started in my office, which is my actual office I work out of, and continued from there to the airport.  As I was about to leave Vancouver, BC, Canada to Minneapolis, Minnesota, US I actually shot all the airport scenes as I was waiting for my flight.  As well, all the airplane shots were actually done while I was on the plane to Minneapolis.  It was funny because there was a guy sitting next to me who I’m sure was super confused and never asked once what I was doing.  Although, I did animate the Post-it Note climbing out of the book in the seat pocket and walking up to the window at least a half dozen times with my DSLR camera positioned in my lap, making small handheld movements to follow the animation of the Post-it Note as it walked across the back of the plane seat in front of me.  I always wonder if once the film launched, the guy sitting next to me ever saw the short film on YouTube and finally realized what I was doing. It was definitely guerilla filmmaking at its best.

When I made it to St. Paul, Minnesota, where the 3M headquarters is located, I didn’t even have an idea of where I was going to shoot the final shots with Art Fry.  It turned out no one there even knew I was coming down to shoot this film.  I ended up getting some strings pulled and discovered the actual 3M Innovation Center.  I turned out it was the perfect location and a place where Art Fry spent a lot of time inventing.  Therefore, it really just magically worked out in the end.  The last shots we took were what we used in the credits of the Post-it Note playing with his ‘father’ Art Fry in a playground by the 3M headquarters.  It turned out that we had to make the day look like Father’s Day…which is in June but the weather was 0 degrees celcuius…it was freezing.  Luckily Art, who was 78-years old at the time and only wearing a blazer, was a trooper and stuck it out.  He was an amazing man and so kind and generous with his time.  We got really lucky to be able to feature him in the video.  I don’t think I would have done it any other way if he wasn’t available.  Which almost happened since he had just been inducted into the inventor’s hall of fame a few days earlier and almost wasn’t going to be in town when I arrived to shoot.

When I was animating the Post-it Note walking up to the 3M Innovation Center it was super windy and many times my Post-it Note hero would blow away.  It was a difficult shoot.  On top of that people were always coming out of the 3M Innovation Center and wondering what I was doing lying on the ground moving this Post-it a few millimeters at a time.  It was funny when a group of Chinese 3M marketing employees visiting from China were coming out of the center and saw what I was doing.  One of the tour guides told them I was filming a 3M commercial and they all pulled out there cameras and took pictures of the Post-it and me for 10 minutes as I laid on the ground animating the little Post-it Note walking. 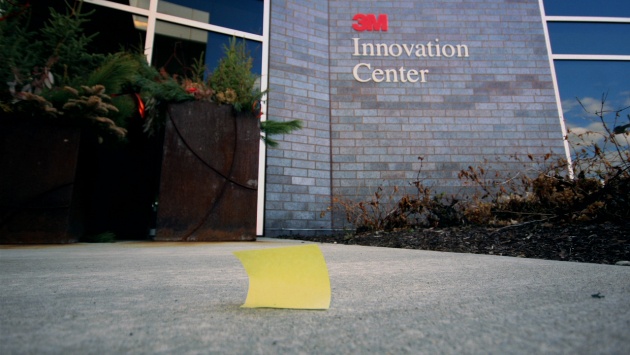 I shot and animated the majority of the film myself without an assistant.  Although, in the shots that feature me, I had to get a friend, Jen Kato, to help out with the camera work.  It was all shot on a digital SLR taking multiple photos. I was using a Canon 40D. I also had Jen do the origami crane animation, because even though I’m half Japanese Canadian, my origami skills are weak.  Jen even played the girl in the airport who picks up the Post-it Note off the seat for a bookmark.  In St. Paul, I had a local stop motion animator, Kari Jo Skogquist, help out with the shots with Arthur Fry.  She was also driving the car that the Post-it Note hitches a ride to.  So it was a very small crew...sometimes just a crew of me and another person.

My composer, Genevieve Vincent, knew a talented sound designer, Daryl Pinsdorf, who came on board to bring the film to life through sound since there was no live sound recorded during shooting since each frame of the film was captured one at a time.  Genevieve and Daryl both work together in New York and this is the fourth film Genevieve Vincent has scored of mine.  She recently just finished scoring my feature length documentary, One Big Hapa Family and upcoming short Yellow Sticky Notes | Canadian Anijam.  You can watch clips of both on my Film Annex Meditating Bunny Studio WebTV http://www.filmannex.com/webtv/meditatingbunny.  Since the film was shot silently, music was very important to bring the story to life and add emotion to the visual storyline. 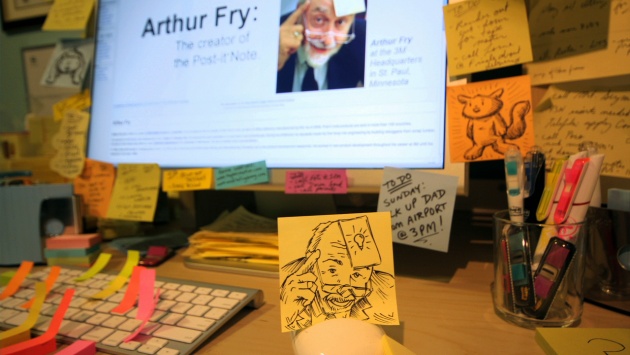 A still from the short stop motion film, Ode to a Post-it Note, where the Post-it Note hero discovers its father, inventor Art Fry, using an online search!