The Ocean at the End of the Lane - Book Review

A perfect book to read this Halloween Month. Get ready to be scared out of your pants. As what Gaiman, the author, said; this book is a "FAIRYTALE for ADULTS"

On the cover of Neil Gaiman's extraordinary tale, Coraline, is a quotation from Terry Pratchett, saying that the story has "the delicate horror of the finest fairytales". Gaiman is a master of fear, and he understands the nature of fairytales, the relation between the writer, the reader and the character in the tale. The Ocean at the End of the Lane, like Coralineand like The Graveyard Book, has a young central character – a resourceful and determined child – who finds his world transfigured by terror and strangeness. Coraline goes through a door into a house in every way replicating her own, inhabited by a copy of her mother with black button eyes. Bod (full name Nobody Owens) is brought up by ghosts in a graveyard after the murder of his parents and sister. The narrator of The Ocean at the End of the Lane starts his story with that feared disaster of childhood, the seventh birthday party to which no one came.

His parents have a lodger, an opal miner, who accidentally kills a kitten, and subsequently kills himself in the family car. This event, still in the everyday world, is the beginning of a terrifying shift in the nature of things. One of the terrors of childhood is the realisation that parents are not necessarily strong or understanding. One of the pleasures of my own childhood reading was the resourcefulness of children left to fend for themselves – and the knowledge that the shape of the story meant that they would do so.

There are three women living in a house at the end of a lane – Old Mrs Hempstock, Ginnie Hempstock, and Lettie, who owns an ocean which appears to be a duckpond, "dark water spotted with duckweed and lily pads". A dead fish, which turns out to have swallowed a Victorian sixpence, leads to an encounter with something alien, powerful, dangerous, though not entirely malign. It manages to get into the boy's house, where only he knows that it is not what it seems and that it means to take over.

The boy moves into a world of primeval danger, helped, when he can escape to them, by the Hempstock women, who are also not what they seem. His family's complete unawareness of any threat is part of the terror. Gaiman has an epigraph from Maurice Sendak: "I remember my own childhood vividly … I knew terrible things. But I knew I mustn't let adults know I knew. It would scare them."

Towards the end of this tale the storyteller enters the pond which is an ocean and has an odd experience of space and time – trying to get one's mind around scientific images of space and time, light and black holes, the Big Bang and its consequences is enough to shake our sense that "everyday reality" is particularly real – and says, "I saw the world I had walked since my birth, and I understood how fragile it was, that the reality I knew was a thin layer of icing on a great dark birthday cake writhing with grubs and nightmares and hunger."

I was somewhat surprised to see that The Ocean at the End of the Lanehas been discussed as a book for adults which children can also read. When I thought about it, I realised that I am an adult reading self, and also a child reader, and that it was my childhood self who settled into this story. I am an adult who reads "children's" books avidly – as long as they have no designs on me, do not manoeuvre me or preach.

Gaiman's long novel American Gods is a wild fantasy for adults who remember being child readers. The Ocean at the End of the Lanearouses, and satisfies, the expectations of the skilled reader of fairytales, and stories which draw on fairytales. Fairytales, of course, were not invented for children, and deal ferociously with the grim and the bad and the dangerous. But they promise a kind of resolution, and Gaiman keeps this promise.

There is a peculiar pleasure about reading as an adult what gripped the child's imagination. I wonder now what I imagined about the world of The Three Musketeers, or Walter Scott's medieval tales, or The Scarlet Pimpernel, which I inhabited passionately at the age of the seven-year-old in this story. I'm not even sure that I then knew France wasn't England. The narrator of The Ocean at the End of the Lane is an adult, now placed outside the fierce world of the drama of the book. The child I was would have seen him as wispy, grey, diminished. He stands in Wordsworth's "light of common day", and sometimes revisits and remembers the ocean. I can see the world from his point of view now. But it isn't more "real" than the bright terror and danger of his childhood. 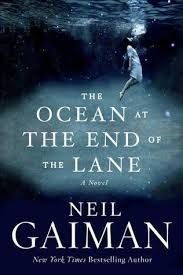