Theodolite  (Theod.):  It is a most precise instrument designed for the surveying.  Mostly used for the measurement of horizontal and vertical angles  Has the wide application in surveying:Laying the horizontal angles Locating the points on the ground or on a line or circle / curve Prolonging the survey lines Establishing the grades (gradient)  Carry out Levelling  Setting out the curves, etc.

Components of Theodolite: (i) Telescope (ii) Vertical Circle (or Vernier Circle)  V.C (iii) Vernier Frame: It supports the V.C from outside. (iv) A-Frame: It is an A-shaped outer-most vertical frame which supports whole the measuring assembly). (v) Levelling Head and Foot Plate (these are the two horizontal plates parallel to each other; Levelling Head lies above the Foot Plate). (vi) Two Spindles or Two Axes: These are the two inner and outer vertical supports which holds the assembly lying above the Horizontal Circle which also serves as a horizontal frame. 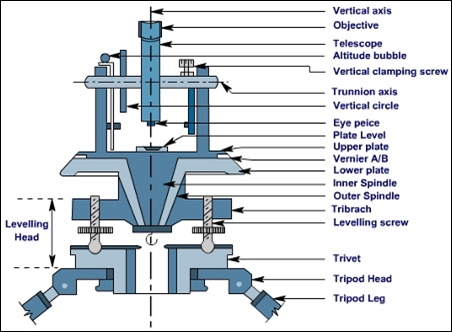 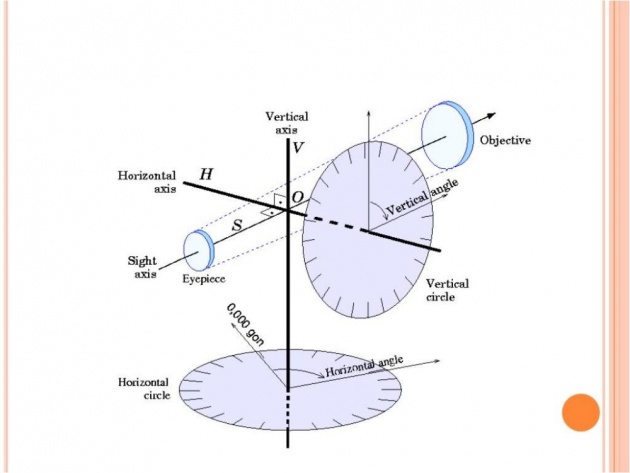 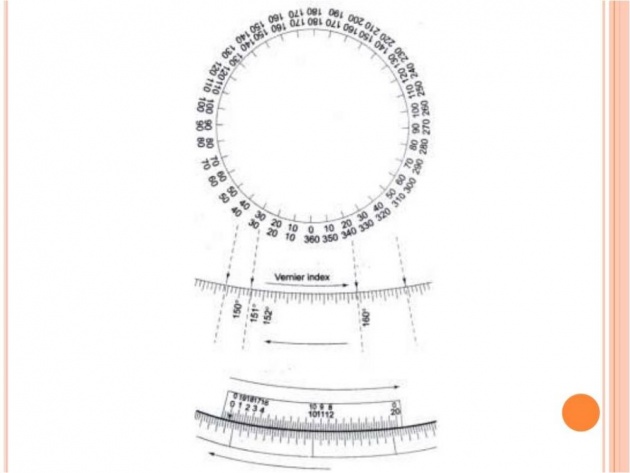 .Measurement of Angles with Theodolite:

(a) Direct Procedure: (i) Set up the instrument, say at point B  Centre and Level it(ii) Release the clamp of Upper Plate; set vernier to read zero; clamp the plate(iii) Loosen the Lower Plate and sight (say) point A. Clamp the Lower Plate and accurately bisect A by using the Lower Tangent Screw. Read both the verniers and take the mean of two readings. (iv) Unclamp the Upper Plate and swing the telescope in clockwise direction until point C is sighted. Tighten the Upper Clamp and accurately bisect C by using the Upper Tangent Screw. (v) Again read both the verniers and take the mean of two readings. Difference in the mean of the reading noted at A and that at C is the angle ABC.(vi) Change the face of the instrument and repeat the steps from (ii) to (v) to measure the angle ABC on Face Right. (vii) Now take the mean of the two measurements for the angle ABC with Face Left and with Face Right; it will give the correct required angle ABC.Measurement of Angles with Theodolite:
(b) Repetition Method

(b) Reiteration Method: This method is very useful when there are several angles , β, γ, , etc. having a common vertex e.g. ‘ O ’. In this method, the angles are measured successively starting from a Reference Point / Station (e.g) A here and finally closing at the same point. This operation of taking the last observation on the same starting station is known as Closing Horizon. As a check, the sum of all the angles, say , β, γ and  must be equal to 360o. This method is also known as Direction Method.

Let the instrument be stationed at the point i.e. station O. The AOB (), BOC (β), COD (γ) and DOA () are to be measured from the station O (having the theodolite stationed at this point).Steps for Reiteration Method: (i) Theod is centred and levelled at O(ii) Sight the station A using lower clamp and set the vernier to read zero. Clamp upper and lower plates. Read both the verniers and take mean of both the readings. (iii) Unclamp the upper plate, move the instrument clockwise and bisect the next station B accurately using the upper tangent screw. (iv) Read both the verniers and take the mean.(v) Similarly sight the station C and D one by one and then finally the station A. In each case, read both the verniers and take the mean. (vi) The angles , β, γ and  are calculated by finding out the difference between the two consecutive readings. (vii) Transit the Theod, swing the instrument anti-clockwise and take the observations with Face Right to measure each angle. (viii) Average of the two readings with Face Left and with Face Right (for each angle) will give the true value of that angle. Example:  + β + γ +  = 80o 31’ 30’’ + 70o 54’ 20’’ + 85o 23’ 50’’ + 123o 10’ 20’’ = 360o

Decomposing Signal into its even and odd components: Develop a simple MATLAB function to decompose …

Structure And Function Of Chlorophyll

Chlorophyll is a complex compound. It absorbs mainly blue and red portion of sunlight. The green por…