I love watching movies. In the recent years, a number movies based on comic book titles came on the big screen. Specifically, superheroes from Marvel Comics, dominating the box office chart. In so many years that' passed, I wanted to make my own movie review but wasn't able to. Now, this is my very first review, and the movie is Thor: Ragnarok.

Thor: Ragnarok is the third installment of the Thor movie franchise by Marvel Cinematic Universe (MCU). Once again Chris Hemsworth plays the main character Thor- the Son of Odin. With his mystic hammer Mjolnir, Thor is also known! as the God of Thunder.

The movie starts with Thor, chained and caged, talking to a human skeleton which literally dropped its jaw. Thor then dropped from the cage but still 9 and was greeted by the fiery demon Surtur (Clancy Brown). 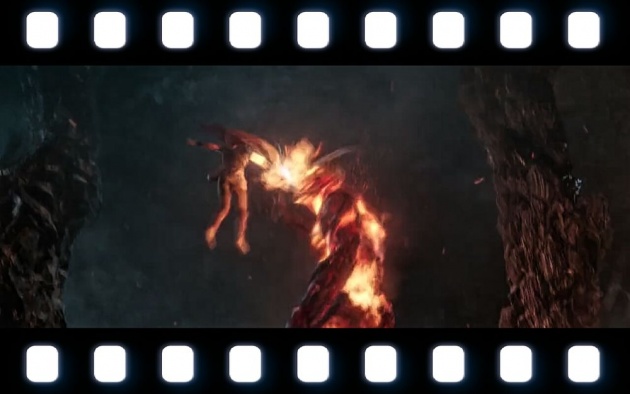 Screenshot and edited by: @artbytes for bitLanders

Surtur, along nemesis of Asgard, told his plan to destroy Asgard. An event is known as "Ragnarok". However, Thor set himself free and struck down Surtur's horned-crown off his head.

Chased by a dragon, Thor wondered why it took Heimdall (Idris Elba) sometime before the Bifrost Bridge was opened. Upon returning to Asgard, with Surtur's crown (and the dragon's decapitated head), he was surprised to Skurge (Karl Urban) manning the rainbow bridge instead of Heimdall.

Later Thor discovered that his father Odin (Anthony Hopkins) is no longer in Asgard. Instead, he found Loki (Tom Hiddleston), disguised as Odin ruling Asgard. They both went to Earth looking for Odin. With the help of Doctor Stephen Strange  (Benedict Cumberbatch), they found Odin in a Norway. However, after warning them of the coming Ragnarok, Odin vanished.

Just moments later, Hela (Cate Blanchett), the Goddess of Death and the firstborn of Odin appeared. Both Thor and Loki tried to fight her but Hela almost effortlessly destroyed Mjolnir. While trying to escape through the Bifrost, Hela knocked both Thor and Loki out of the beam. 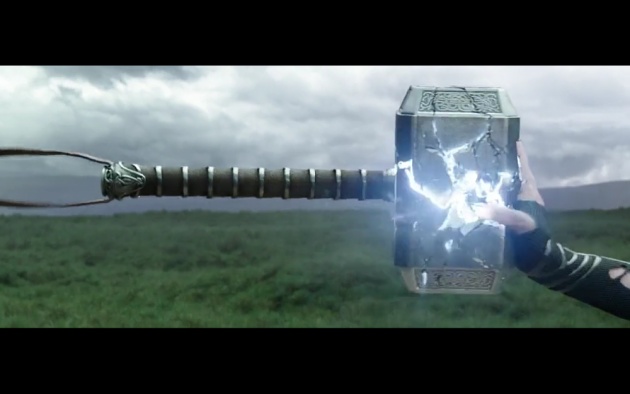 Hela, breaking Mjolnir with one hand

Later, Thor found himself on the planet known as Sakaar. Thor was captured by a woman who was actually a Valkyrie (Tessa Thompson). The Valkyrie sold Thor to the ruler of Sakaar known as the Grandmaster (Jeff Goldblum). 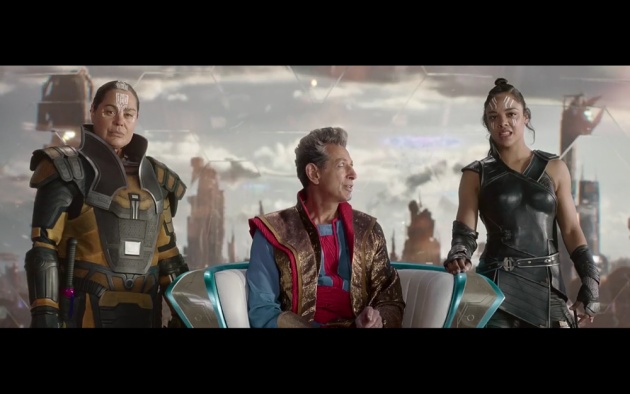 The Grandmaster talking to Valkyrie

Meanwhile, Hela reached Bifrost which is now manned by Volstagg (Rey Stevenson) and Fandral (Zachary Levi). Skurge was there cleaning up the mess. Hela, easily disposed of Volstagg and Fandral . Skurge, who offered no resistance, was kept alive and was hired as the Goddess of Death's henchman.

Thor was fitted to become one of the gladiators. His first fight, was against the lost green Avenger, the Incredible Hulk (Mark Ruffalo). Thor was almost beaten to a pulp by the Hulk. But, somehow the power of Mjolnir to cast lightning bolts manifested in Thor's body. Thor was only stopped remotely by the Grandmaster using the "Obedience Disk" that was attached to his neck that sends an electrical surge to his entire body. 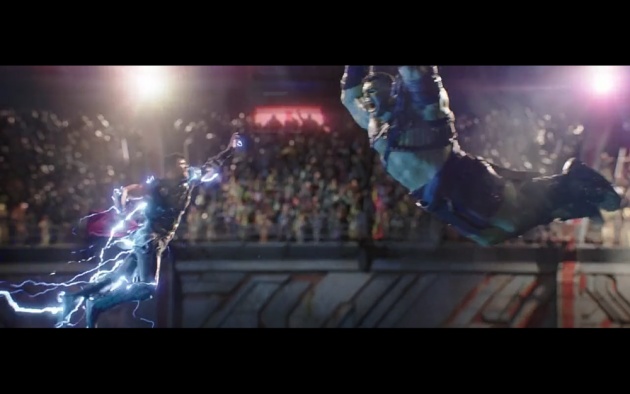 Electrified Thor Vs. The Hulk

Later, Thor and the Hulk- who now turned back into his human alter-ego, Dr. Bruce Banner- with the help of Loki, the Valkyrie, and the other gladiators escaped the planet through the portal named as the "Devil's Anus". However, Thor attached and activated the obedience disk on Loki. Leaving the God of Mischief  stunned in the Hangar. Loki was found by Korg (Taika Waititi) and the other gladiators who are trying to escape the planet too.

They returned to Asgard and attempted to rescue the other Asgardians. Once again, Thor fought Hela. However, without Mjolnir, Thor was defeated and lost his right eye in the battle.

Meanwhile, the Valkyrie and Banner are trying to help Heimdall and the other Asgardians who are trapped on the Rainbow Bridge. Coming from the Bifrost is the gigantic dog and chasing the Asgardians are the undead Asgardian Army, led by Skurge who is now known as the Executioner. Banner turned in the Hulk and fought Hela's gigantic dog.

Heimdall, wounded on the leg, was about to be skewered by an undead soldier when Korg shot the soldier from behind. Korg, with Loki and the other gladiators, followed Thor's group back to Asgard.

The God of Thunder

Back in the palace, while Hela is choking Thor, his body was again filled with electricity as if the power of the Mjolnir filled his entire body. He struck Hela with a powerful lightning bolt that threw her away. Thor flew to the rainbow bridge and fought the undead army. 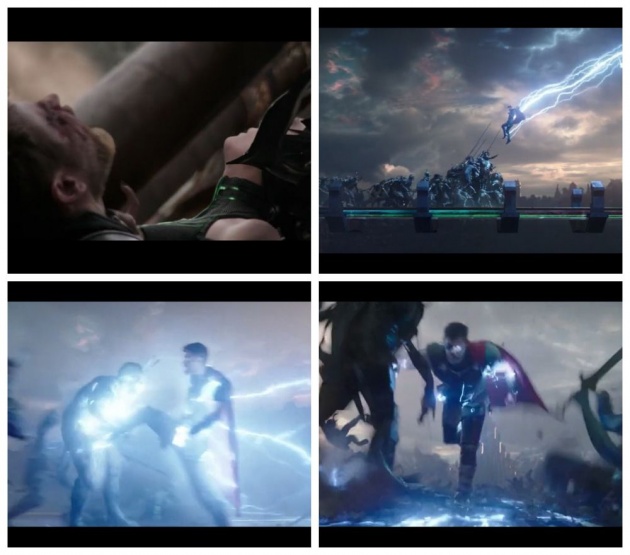 Thor, with his power as the God of Thunder

Screen captures and edit by @artbytes

When Hela, recovered from the lightning strike, reached the rainbow bridge, Thor came to a realization. That they had it all wrong. They were not supposed to stop Ragnarok. Rather, they are to cause it.

Loki sneaked into the Asgardian Vault and placed Surtur's crown into the Eternal Flame. This resurrected Surtur and he grew as big as a mountain.

After stopping the Hulk from fighting Surtur, Thor, Hulk, and the Valkyrie joined the other Asgardians in their spaceship and left Asgard.

Surtur destroyed Asgard and Hela along with it.

Heading towards Earth though, they were intercepted by a huge spaceship almost a hundred times the size of their ship.

Thor: Ragnarok is generally more entertaining than the previous installment of the movie. It has a lot of humorous scenes and some are quite subtle. Visual effects are superb and the fight scenes are just as awesome.

The movie is action-packed, from start to finish. It is fast paced that you will never notice that the movies last for two hours. I even find the Sakaar scenes quite short.

It was just sad though that the Warriors Three had to die. Lady Sif was missing but another Valkyrie was introduced. I don't think they mentioned a name for this Valkyrie.

One thing I noticed about the characteristics of Thor and Loki is they are more human like int this movie. In at least one occassion Thor exclaimed "Oh, my God!" and his face showed expressions of fear.

Then again, Odin has already explained that they are not really gods. They just aged too slow compared to humans.

The Computer Graphics are truly amazing and realistic. You'd think Sakaar and Asgard are real. But the best thing that I noticed is that The Hulk's face has some distinct similarities to his human alter-ego, Dr. Banner.

Somehow, Thor is less serious in the movies than in the comic books. Almost in all movies involving Thor, there are always subtle funny lines and scenes. Here are some of the scenes that I think are the funniest.

"I have been falling for thirty minutes!"

2. Thor Screaming (like a girl). When Thor was about to be introduced to the Grandmaster, right before the end of the holographic show, Thor screamed like a girl. The second time he screamed was when he was about to get a haircut by none other than Stan Lee! 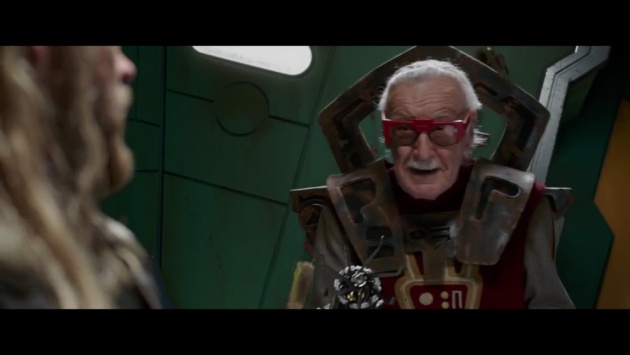 Stan "The Man" Lee as the barber

3. Thor vs. Hulk. While fighting the Hulk, Thor thought he could calm the green beast down by repeating the lines used by the Black Widow to calm down Hulk. However, Hulk grabbed Thor by the foot and slammed him several times on the ground like what Hulk did to Loki in the 2012 movie, The Avengers. Loki, who was watching with the Grandmaster, exclaimed: 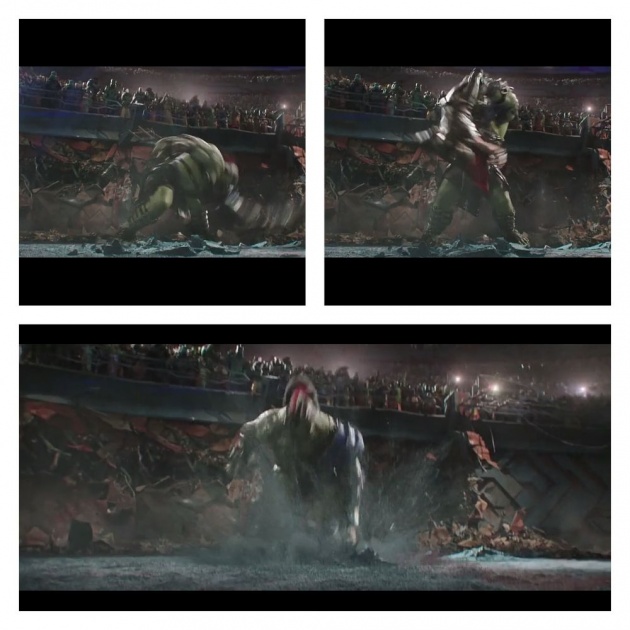 Screen captures and edit by @artbytes

4. The Hulk getting out of the tub. After their fight (I actually don't know who won), Thor and the Hulk is in the same room. The Hulk came out of the tub fully naked and walked in front of Thor who tried to close his eyes.

These are just four of the funny scenes and conversations in the movie and there are a lot more;

Cross Over With Planet Hulk

Any Marvel fan would recognize that this movie is a crossover with The Hulk's mini-series storyline titled Planet Hulk. Where The Hulk was intentionally exiled by the Illuminati into the outer space. Hulk's ship, somehow, landed on the Planet Sakaar. 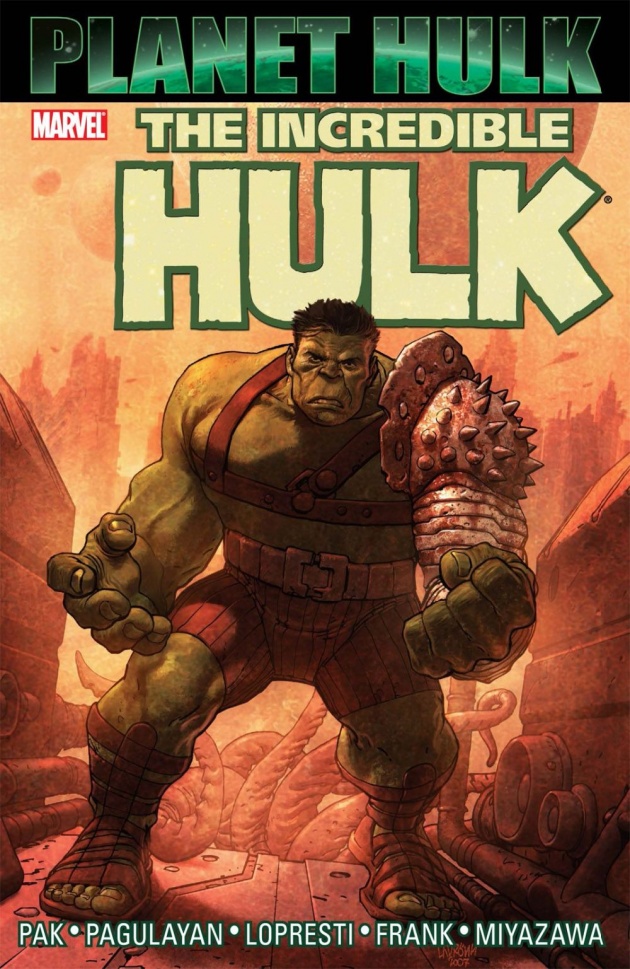 I'm not keen on identifying movie mistakes, but there is a couple that I noticed.

Thor: Ragnarok, clearly is another prelude to the upcoming movie Infinity War. With Asgard destroyed, so is the vault that contains the Tesseract and I believe the Infinity Gauntlet. 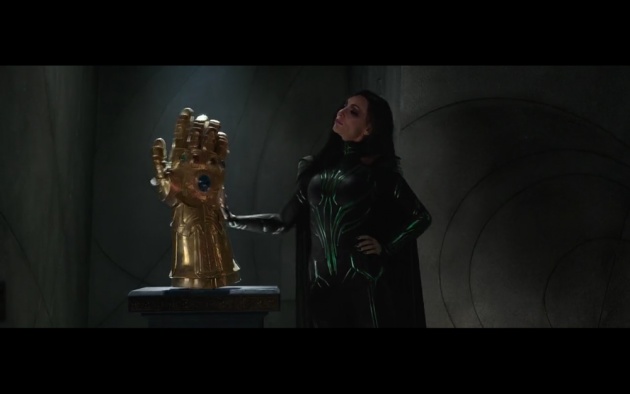 The Infinity Gauntlet (or a fake?)

Excuse For Their Absence During the Civil War

If you have seen the movie Captain America: Civil War, you might have wondered where are Hulk and Thor gone to? This movie is actually a perfect excuse for their absence during the Civil War.

Let me leave you with a review of a movie expert: Manny The Movie Guy

You can join Bitlanders by clicking this link: http://bit.ly/Join_bitlanders