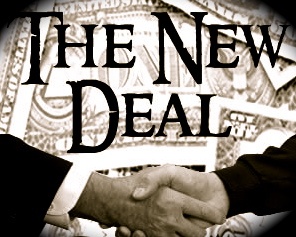 Borrowing term US President FDR employed to deploy vision of how to deliver US from Great Depression and help US workers 3/4s of century earlier, UN leader urged thinking for “a global new deal” to break the mold of economic thought that led to the international financial crisis. “Finance needs to get back to the business of providing security for people’s savings and mobilizing resources for productive investment,” writes Supachai Panitchpakdi, the UNCTAD Secretary-General, in the report. “Surveillance and regulation will need to be strengthened at all levels,” according to Supachai Panitchpakdi, the UNCTAD Secretary-General, He writes in a newly released Report entitled Development-led globalization: Towards sustainable and inclusive development paths, the UN Conference on Trade and Development (UNCTAD) urges the international community to take decisive steps towards reforming global finance into a system allowing for more stable and inclusive economic progress. Read – “You Affecting Outcome of Rio+20” - diplomaticallyincorrect.org/films/blog_post/you-affecting-outcome-of-rio20/44259 Imbalance in Benefits & Risks: UNCTAD has long maintained that the current global economic and financial system has allowed a lop-sided system to flourish, with some participants reaping the benefits while global income inequality and financial imbalances have also accumulated. In effort to counter the growing disparities, the agency has suggested multiple policy measures and reforms to support living standards in developing countries and build their resilience to external shocks. READ – “State of Food Insecurity in World 2011” - diplomaticallyincorrect.org/films/blog_post/state-of-food-insecurity-in-world-2011-un-report-by-ambassador-mo/36153 Banks & Financial Institutions as “Masters” “Financial markets and institutions have become the masters rather than the servants of the real economy, distorting trade and investment, heightening levels of inequality, and posing a systemic threat to economic stability,” warns the Report, which also defines the dominant pattern of international economic relations during the past three decades as “finance-driven globalization.” Read: - Globe Needs 600 Million Jobs for Next Decade” - diplomaticallyincorrect.org/films/blog_post/globe-needs-600-million-jobs-for-next-decade-by-ambassador-mo/44004 UNIVERSAL Values & Goals of GLOBAL CITIZEN for Job, Food, Energy, Climate & Economic SECURITY! Mr. Supachai instead calls for financial and other resources to be channelled towards “the right kinds” of productive activities, ensuring that measures to diversify economic development are consistent with job creation, food and energy security, and tackling the threat of climate change. “It is a basic truth that people everywhere want the same thing: a decent job, a secure home, a safe environment, a better future for their children and a government that listens to and response to their concerns,” writes Mr. Supachai. “This time around, rebalancing will need a global new deal that can ‘lift all boats’ in developed and developing countries alike.” Also Read – “Global Peace Index” - diplomaticallyincorrect.org/films/movie/global-peace-index/27144 Link to UNCTAD - www.unctad.org/Templates/Startpage.asp?intItemID=2068⟨=1 Ambassador Muhamed Sacirbey - FOLOW mo @MuhamedSacirbey Facebook-Become a Fan at “Diplomatically Incorrect”       Twitter – Follow us at DiplomaticallyX        “International Financial Crisis Channel - diplomaticallyincorrect.org/c/international-financial-crisis