Modern civilizations on earth are results of long wars that started with the birth of life on the Earth.Living organisms are fighting against the environment as well as against other living organisms for land, food, survival and also power.
But wars that humans have fought with other men are massive, terrible, divisive and destructive. The man is also fighting from the time of his birth. Groups fight Other groups, armies fight armies, countries fight countries and so on.

Vietnam war is also known as 2nd Indo-China war was fought during 1955-1975 in Vietnam, Laos, and Cambodia. This, actually, started as a civil was, a result of 1st Info China war that divided Vietnam.
North Vietnam Army and National liberation Front fought against South Vietnam Government and United States Army.

The United States of America was in cold war with Russia at that time. The US Was taking every action to stop the progress of communism in the world. It was faired that if Vietnam reunites under communists, communism will spread all over southeast Asia. Thus Theory is known as "Domino Theory". So, United States helped in establishing a noncommunist government in South of Vietnam. This caused the birth of rebel movement " National Libration Front". NLF wanted to southern government and reunify the country.

In 1965 US sent its troops to fight against Northern Vietnam Army and NLF. But even after a long war of a decade, US could not get success and at last Vietnam was reunified in 1975 under communist control. US had to exit from Vietnam due to anti-war movements in the US by people of America and loss of too many soldiers.

In 1976 Vietnam was officially announced, "The Socialist Republic of Vietnam". Casualties and other damages were very high as the war was a decade long. The US lost 58000 soldiers in Vietnam war. Around 800000 to 3.2 million Vietnamese, 1-2 million Laoists and Cambodians were killed. 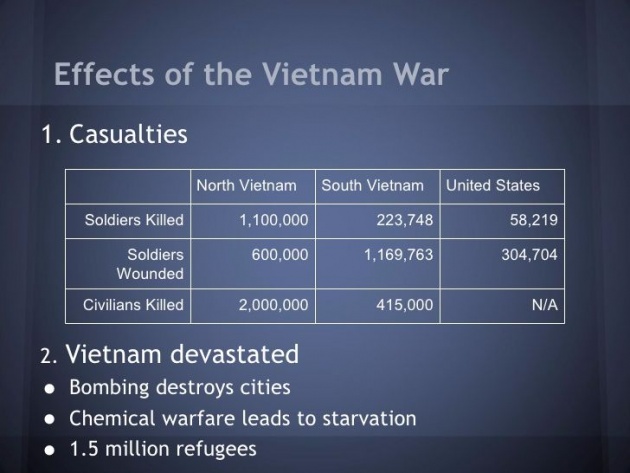 In this way thus war finished but left environment marks on future of Vietnam and other south-east Asian countries. America could not achieve its goals in Vietnam and a new unified Vietnam government was established in the country.