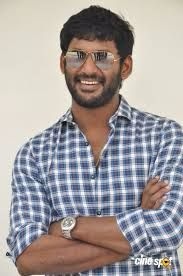 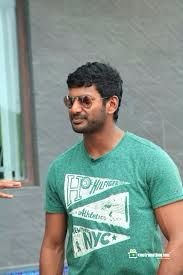 Vishal Krishna (popularly known as Vishal) is an Indian tamil film actor was born on 29th August 1977 to G.K.Reddy and Janaki Devi, his father is a veteran Tamil & Telugu film producer in Andhra Pradesh & then after shifted to chennai.

Vishal did his schooling at Don Bosco Higer Secondary School and secured a degree in Visual communication from Layola College, Chennai.

His elder brother, Vikram Krishna Reddy, who was formerly an actor under the name 'Ajay' and acted with Sivaji in Poo Parikka Varugirom, took off from where his father left and produced two films, Sandakozhi and Thimiru, starring Vishal. Vikram married Sriya reddy who acted with Vishal in Thimiru. He also has a younger sister Aishwarya.

He was elected the general secretary of the Thennindhiya Nadigar Sangam (South Indian Film Artistes' Association) on 18 October, 2015.

Vishal was declared the new general secretary with 1,445 votes against actor Radha Ravi, who bagged 1,138 votes. Radha Ravi had held the post for almost a decade. Vishal won by 307 votes.

Nasser who contested against Sarath Kumar polled 1344 votes and won by a margin of 113 votes.

The team launched a systematic campaign against former president, Sarath Kumar and general secretary, Radha Ravi, focussing on the deal signed by Nadigar Sangam with SPI Cinemas to develop a 19-ground prime property in the heart of the city.

Vishal's strong passion for direction got him an apprenticeship with Ram Gopal Varma, just after he completed Visual Communication at Loyola College, Chennai. But for his parent’s desire to have him closer to home, he canceled his flight ticket to Mumbai and headed to the decks of actor-director Arjun’s production house.

Vishal’s tenure as assistant to Arjun for the films Vedham & Ezhumalai exposed him not only to the nuances of direction but also aspects for excellence in the performing branch. A chance encounter with G.J. team had his providence rewritten on a different path. Their offer to cast him as the protagonist in their venture Chellamae was accepted by Vishal after a careful consideration. With his zeal and sincerity, he did not land directly on the sets, rather took up a three-month acting lessons from a Koothupatrai troupe.

He had 3 back-to-back hits with Chellamae, Sandakozhi and Thimiru which all became dubbed in telugu. This was a feat indeed as few actors actually score a first-time Hat-Trick in Cinema history.

His 4th film, Sivappathigaram was an below average grosser while his 5th film Thamiraparani with popular director Hari achieved enough box-office success, after it opened in Pongal 2007, to be dubbed in Telugu as Barani.His next film Malaikottai was an average grosser at box office.

Later, he did a Tamil-Telugu bilingual, titled 'Sathyam' in Tamil, was an disaster in his filmograpgy. Then his Thoranai movie released and it did an average run at box office.

He had only one release in 2010,i.e Theeratha Vilayutu Pillai which was distributed by Sun Pictures. Due to their hard promotions movie did a above average businees at box office. Then, Vishal realised that his fans and other movie buffs expecting something different from him. So he bags the offer of director Bala's 'Avan Ivan' without any consideration though its an two hero subject along side with Arya. Movie is under post production now and will release in April 2011.

Before the release of 'Avan Ivan', Vishal signs the new project with Prabhu deva which will be produced by his brother. Movie is untitled yet, sameera & Vivek are other casting in the untitled film. There is also an news that director Boopathi Pandiyan might do a film with Vishal which is titled as Pattathu Yanai.