Why Afghan Girls Give up on School 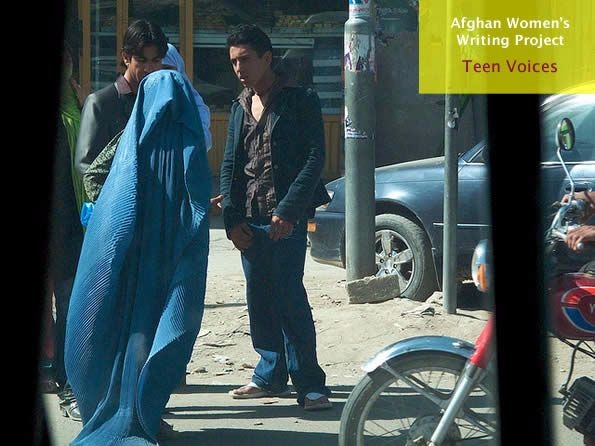 A girl has so many problems in Afghan society and so little freedom that sometimes I think it is as if they are living in cages. Many girls are not allowed to go to school and if they try and get an education, people harass them.

There are many stray men and boys who are uneducated and jobless and they make a hobby out of teasing girls. When a girl goes to school, she has to look down and never pick up her head to see how her city or her homeland looks. Girls just put their heads down and walk.

Many Afghan people think a girl who goes to school brings terrible shame on herself and her family. They believe all girls should stay at home and serve their families and husbands all the time.  They want girls to cook, clean, and care for the children and they think girls don’t have the right to study and be educated.

I know many girls who had to quit school.  One man is even a doctor, but his wife died six months ago and they had six children. The oldest girl is thirteen years old, so he told her she must leave school now and take care of the six-month-old baby. So she left school. It makes me sad because her father is an educated man. Why would he do this to his daughter?

There are other problems in some places, like acid attacks, bombings, and death threats from the Taliban directed at girls who go to school. Facing all these things, some girls have to give up on school. But others don’t give up and they become stronger.

Sometimes I’m afraid of society and worry about my future. But I think I’m strong.  I am proud of myself and my family. I hear boys saying, “These are just women and that’s why they don’t know anything and can’t do anything.” I tell them all the time, “If you let us, we can do everything!”

Families who treat girls differently from boys are increasing the discrimination and decreasing the self-confidence of girls instead of helping girls escape from the cages. Sometimes I think about how one day everything will be fine and nobody will have these problems in Afghanistan and that makes me happy.