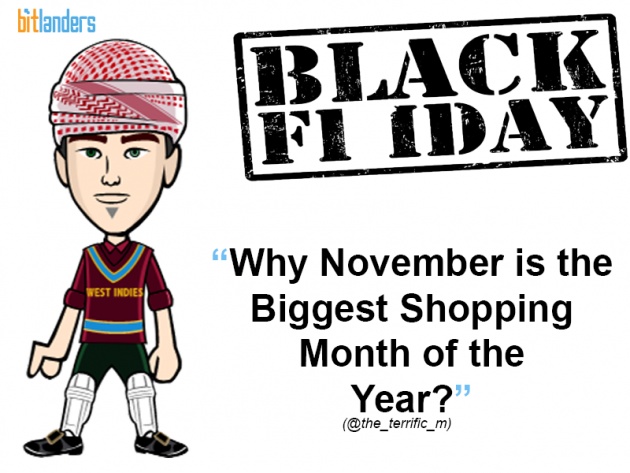 Image credits: Made by me.

Recently, the 24th November has passed, on which the World had celebrated “Black Friday”. It is celebrated all over the World every year on the fourth Friday of the November. The myth behind the Black Friday is that the fourth Thursday of November has been regarded as the beginning of Christmas Shopping Season since 1952. The Thursday is known as “Thanksgiving Day” and the day after it is known as “Black Friday”. Although “Black Friday” is not an official holiday but some states in America observes a holiday on it. Most major and renowned retailers and stores open up very early and offer a huge discount and promotional sales.

A rush of people at Shopping Malls on Black Friday.

Since the last decade, Black Friday has been the busiest and the best shopping day of the year in the United States. But in the last few years, it has taken all the World under its fever. What Pakistan [the country I am living in] or What America? Every major online e-commerce sites, brands, and stores were in the race to offer as much discount and sales as they can with respect to the Black Friday. But Black Friday is not the only event in November and in fact, not the biggest which increase the customer’s shopping fever, definitely, there is something another shopping fest which we must need to know about. So this blog is going to prove why November is the biggest shopping month of the year? Moreover, how does it impacts the World? And to share facts, records and market analytics of different shopping days.

Remember one thing, the shopping in November was all about digital. The giant online e-commerce sites like Alibaba, Amazon, and others were beyond the expectations in order to provide amazing deals and discounts. As it is more easy and reliable for the customers to search the desired products and purchase from their favorite site living anywhere in the World. But the twist is, the e-commerce king Alibaba Group didn’t set up its stage on Black Friday. Being the biggest competitor in the e-commerce market, Alibaba planned differently as compared to its arch rivals.

Coming up with the significant idea of same month but with a different day, the e-commerce giant, Alibaba Group Holding Ltd.’s set up the World’s biggest online shopping day every year on November 11 in competition to the “Black Friday” known as "Single’s Day".

So, what is Singles Day?

When on 14th February of every year, Valentine’s Day is being celebrated by the couples, there must be an obscure sympathy for the single people. Due to this, back in the 1990’s, China decided to celebrate an “anti-Valentines” on November 11 every year for single people termed as the Singles Day. However, in last few years, it has been the World’s biggest online shopping day surpassing the mighty “Black Friday”.

To put the cherry on the top, the Alibaba Group provides exclusive sales, discount offers and promotions to get maximum customer’s concentration towards it. In the recent “Singles Day” sale, the Alibaba Group Holding Ltd.’s generated a record 168.2 billion Yuan [$25.3 billion] in sales, which is more than the GDP of several countries including the exports of Pakistan. The customers had shopped through the different channels of Alibaba Group such as websites and smartphone apps and customers from 225 countries and regions took part in this mega shopping day.

To pump up the event, the e-commerce giant also hosted a concert gala in which famous worldwide stars which include Nicole Kidman, American rapper Pharrell Williams, along with tennis star Maria Sharapova etc. made their appearance.

This year, the company had witnessed a 39 percent increase as compared to the last year’s sales. At its peak, the company’s system handled 256,000 transactions per second where 90 percent of the transaction was done via mobile.

So is Singles Day is bigger than Black Friday?

"We want to make Singles’ Day a more global event," said Zhang during an interview in Shanghai. "We could take the gala overseas very soon."

Now let’s do the discussion about Black Friday which is a bit smaller shopping fest than Alibaba’s Singles Day but we can’t ignore it at all. The Black Friday was too digital as Amazon came out as the largest online sale store on that particular day. Meanwhile, the Amazon sales on Black Friday weekend beat other competitors by a wide margin. According to Amazon, the most-selling items on Black Friday were its devices which also took the top spot in sales over the weekend. Millions of Amazon’s Alexa-enabled were bought by the customers as it were the top sellers across all of Amazon. According to the Adobe analytics, people spent around $5.03 billion on Black Friday. From these figures, we can easily estimate how much billions does Amazon raked by being the best-seller on Black Friday all over the globe.

Amazon's Alexa-enabled device which was the top selling device on Black Friday.

America, from where the Black Friday actually belongs, is no way behind tumbling the records. American shoppers spent a record $5 billion in 24 hours which marked 16.9% increase in dollars as compared to the last year. According to the Adobe Digital Insights, 80 percent on online spending tracked at the top 100 American largest retail sites. On the other hand, the malls and big-shops retailers remained slightly emptier.

The rush of people during shopping on Black Friday.

The Black Friday fever was massively witnessed in Pakistan, like any other part of the World. The online retailer sites were leading the race as compared to the malls and shops. I would give an extra point to online sites in Pakistan, who made the fantastic promotion of this event by advertising it properly at the public level. The Black Friday event advertisement was seen on the billboards, social media and cars coloring up with the event’s detail. Moreover, the online e-commerce sites were also invested individually on the youtubers, vloggers in order to get maximum customer reach of this event.

The two of many largest online e-commerce sites in Pakistan are Daraz.pk and Kaymu.pk, the Head Communications and PR at Daraz.pk said that more than 1.5 million people in Pakistan visited the website on Friday. “The company received 55 times more order than a regular day”, She said. Moreover, giving details about the Black Friday sales, she added, more the 8,000 mobile phones were sold before noon on that day.

Whereas, the Kaymu Pakistan Managing Director said, their company received orders from 168 cities of Pakistan. The 50 percent of the order came from the desktop while the remaining 50 percent from mobile phones. Winter items were the top-selling items, with winter wear and hoodies were the highest selling product, he added. 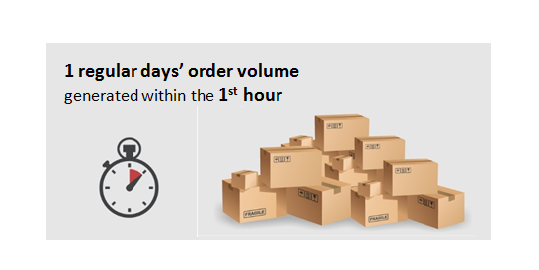 Is there anything exists in this world without of its demerits? A certain controversy arises over the Black Friday too, as the Government official of Pakistan termed Black Friday as Anti-Islamic. Keeping the perception of Friday as a holy day in the Muslim religion, critics said that Friday can never be black, but that’s their opinion. That’s all folks!