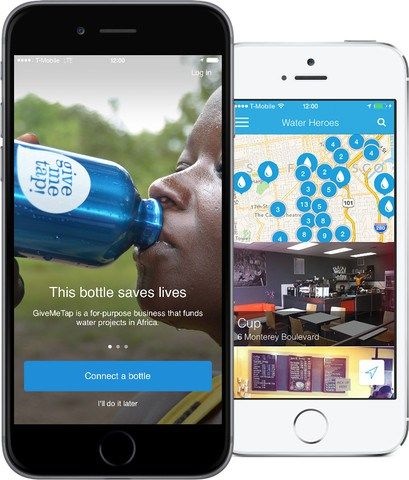 Despite the growth in reusable water bottles, keeping them refilled is tough. Ironically, consumers either end up buying a plastic bottle of water, are forced to use a toilet to refill, or feel obliged to buy something from a store before asking for a refill of water.

GiveMeTap is a new graduate of the Y Combinator accelerator with a rather clever idea. It sells and produces stainless steel water bottles that you can use to get free water refills from participating local cafes and restaurants, which are located by using the GiveMeTap App (iOS & Android). You just walk in, find the water station and fill up or ask someone at the counter. The mobile app will even track your water usage.

The really clever part of its model is that business owners are incentivized to join the network because they get free publicity, increased footfall — and here’s the tech part — access to data about how many new customers they are gaining because of the app. Obviously, people with the bottles are more likely to choose a GiveMeTap venue and purchase other goods there.

The app uses geofencing to confirm the locations and to help with seamless checkins. It also includes a discounts system for people who refill their bottles at cafes; helping cafes attract new customers. For every X number of refills (set by the business owner), the consumers get an offer from the store which can be redeemed. When a bottle owner redeems the offer, the business can judge the incremental value of GiveMeTap and tie that into any sales uplift.

The model sounds pretty good but it gets even better: While consumers get free water, a portion of each bottle sale goes to help give clean water to a person in Africa for five years. So, this is not dissimilar to the Toms shoes model, but for water bottles. And this is even a for-profit business, not a charity.

Each time you refill the bottle, GiveMeTap donates an additional day of clean water to a person in Africa via its partners. It also gives 20% from the sale of each bottle to Pronet, their water NGO partner in Ghana, who has been installing water pumps in Ghana for over 25 years.

It’s also just partnered with several tech startups in SF as part of a new B2B programme “This swag saves lives”. Companies get their logo on the bottle and the bottles get used and carried around: so more free advertising.

Despite it graduating from YC, GiveMeTap is not a brand-new startup. Starting in 2013, it was the first water refill network in the UK and ended up scaling to over 630 cafes/restaurants, including Pizza Hut, selling over 40,000 GiveMeTap bottles. Assuming none of the buyers ever buy more plastic bottles, that would translate to roughly 6 million fewer plastic bottles in landfills, and provide 5,334 people in Africa with clean drinking water for life.

In January this year, the startup expanded into San Francisco, sold over 1,000 bottles and now have 160 GiveMeTap locations in the city.

In theory, if all GiveMeTap bottles took over form plastic bottles sold in the US, they’d take out around 50 billion bottles a year (worth about $1 Billion a year). Only 23 percent plastic bottles are actually recycled.

You can get the water bottles either online or from a stockist. All GiveMeTap bottles are 18/8 Food-grade stainless steel and 100% free of toxins, BPA, phthalate and PVC. The bottles cost $18-20 and come in 2 sizes (16 oz and 23 oz) and 4 different colours (Blue, Black, Hot Pink, Silver).

GiveMeTap is also poised to take advantage of local government’s war on waste and costs. San Francisco has now banned plastic water bottles at public events and spaces, which is similar to the plastic bottle ban in Massachusetts and across several university campuses. The reusable water bottle market is estimated to be worth $1.5 billion and is the fastest-growing consumer durables product.

GiveMeTap was founded by Edwin Broni-Mensah, a former Quant Analyst inside investment banks. He came up with the GiveMeTap idea after going on a fitness regime which required him to “get ripped in 90 days” by drinking four to five litres of water a day during exercising.

The irony is that Broni-Mensah’s father was originally from Ghana, where water is a pretty scarce commodity.