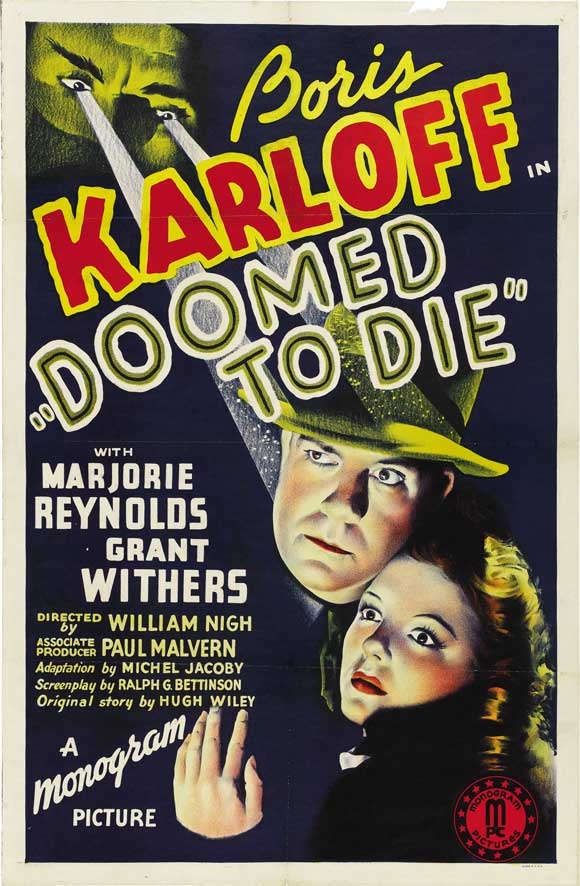 Today we have franchises such as "Transformers" and all the superheroes of the Marvel universe. Once it seemed we couldn't get enough of Jason, Freddy or Chucky. Franchises aren't anything new and in the 30's, a few franchises were               Mr. Moto, Charlie Chan, and Detective Mr. Wong. All three Asian characters were played by caucasian actors, with one exception when Boris Karloff left the Mr. Wong series, a Chinese American actor was employed for the sixth and final installment (somewhat of a Hollywood first!). Sure these franchises have a way of overplaying their hands, making the obvious money grab when it seems apparent to anyone that the character has run its course. We've even seen revival attempts by using the old comic book ploy of mixing and matching characters (i.e. Alien v Predator and Freddy v Jason). However, the demand is what starts these franchises and the supply is made until the well runs dry. 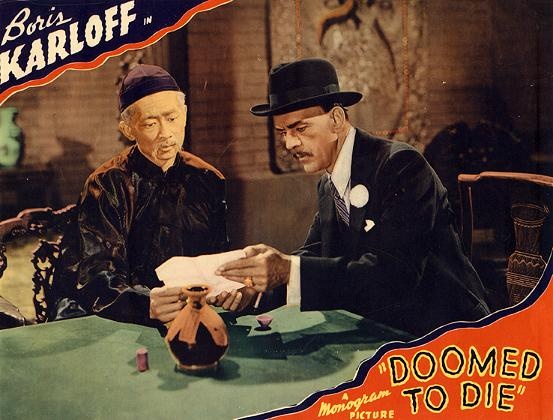 The stories of Hugh Wiley's character Mr. Wong began in Colliers Magazine in 1934 and twelve of them would run through 1938. A smaller studio, Monogram Pictures, would produce the six Mr. Wong films with a good degree of continuity (as well as a slew of Charlie Chan films). William Nigh would direct the first five of the six; Grant Withers played the police detective William Street in all six; Boris Karloff played the title character in the first five; and Marjorie Reynolds would play reporter Bobbie Logan in three. I've always held that the lack of continuity is what kills franchises, be it the premise (Friday the 13th V: A New Beginning) or the changing of title actors (The Batman movies vs. The Dark Knight trilogy).

Doomed To Die (1940) was the fifth Mr. Wong film. The film itself is okay, but worth seeing as a caricature of the use of white actors to play these title Asian characters. It is definitely distracting, from today's vantage point, watching any Anglo actor, let alone Boris Karloff, in the role of Mr. Wong. If one can move past the point of distraction and suspend disbelief (for this is what film demands of us most times), Boris Karloff is awesome as the distinguished detective for hire Mr. James Lee Wong. He demands your respect with the slightly English accent and somehow slanted calm eyes. The film also did a good job of keeping this viewer guessing as to who was ultimately responsible for the murder of shipping magnate Cyrus Wentworth. I also enjoyed the banter between the hard boiled Detective Bill Street and the street wise, sassy young female reporter Bobbie. 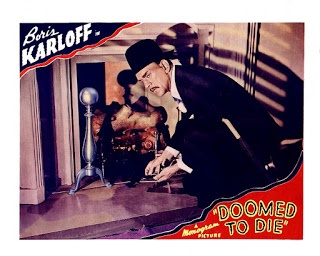 Mr. Wong is part of a film time capsule. For the most part, blackface (exception: Robert Downey Jr. in "Tropic Thunder"), white face (exception: Nick Cannon's recent sensation as Connor Smallnut), white actors playing Asians and the like are a thing of the past. Film now has a more than century old history to it with so many memorable notes and the Mr. Wong/Mr. Moto/Charlie Chan films deserve their own. If you've never seen any of these films and you count yourself as a film buff, you'll enjoy the short feature "Doomed To Die." I'm curious to watch the rest of the series! Enjoy on                    Baxter MartinTV or below! Another one of my last ten films writeup coming soon. How will i link Smurfs 2 with Jules Dassin? Tune in!