Hello from Muskogee, Oklahoma! Duncan & I are here for a long weekend representing my company (TurtleDove Films) and a company I regularly act for (Twitchy Dolphin Flix). 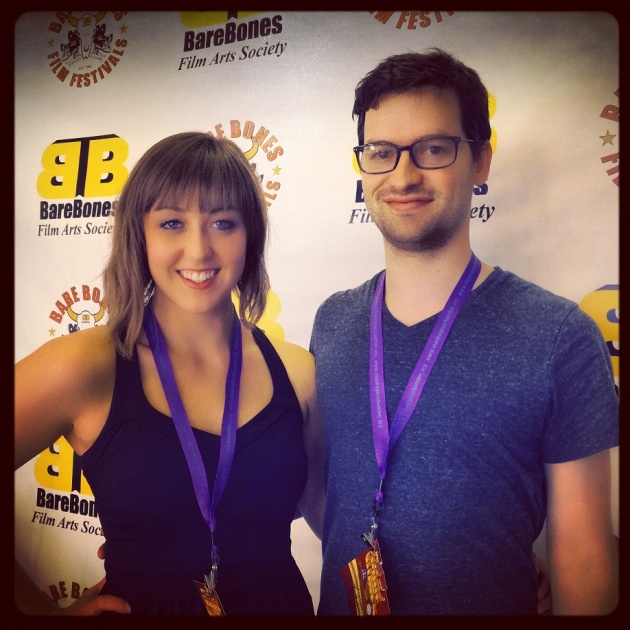 We've had a couple of rewarding days so far: yesterday, our friend and Twitchy President James Christopher did a panel about crowdfunding (and even used us as example/asked us our opinion on a couple of things) and we screened our short film, "The Reunion" which you can also watch right here:

Jim's panel was fun, interesting and informative. Crowdfunding is this crazy beast that not all of us have mastered, but we all should. It's not only a great way to raise money for your projects but a great way to build audience. In fact, when I'm home and finished with the first leg of our Seed & Spark journey (aka finish my e-mails and get the money dropped in our account) I'm going to write a whole blog dedicated to Crowdfunding and what I think are the do's and dont's, so look out for that.

Between the panel and our screening we showed up to a welcome reception where we met a couple of filmmakers, told them about our screening and bragged on our friends who had success at SXSW. (They asked us about SX because we said we were from Austin and the conversation kind of snowballed from there). They actually showed up to our screening, too, so that was cool!

Our screening was.. okay. In the interest of being absolutely transparent (something we strive to be at TurtleDove): it kind of sucked. The room we were screening in had a problem with the projector and there were some major sound issues. What seemed to be going on was that there was interference between the projector and DVD player and every time color was on the screen (part of the film is in color and part is in black&white) there was a huge whining noise.. particularly when there were a lot of reds on the screen. So, we kind of looked like amateurs in the sound department (something that hit me pretty hard since I ran sound solo on that one along with directing the thing) but, silver lining, everyone in the audience seemed to understand that it was a technical difficulty and were very forgiving. There was actually a pretty big turnout for our screening, especially considering we're in Oklahoma where we know no one besides the people we came with. We came with a pretty huge entourage, but I would still say that half the room was filled with people we didn't know. Most of them had really great questions for us too, so we got to practice our Q&A skills. Although I had a teary moment at the bar right afterwards, all in all, it was a good experience for me.

Today, we did a readthrough for a script of Jim's that has been getting a lot of attention lately. That was fun and exciting and I'm always up for helping my fellow filmmakers, so it was great to be a part of that. Cross your fingers that he will win the audience choice award for script at BBFF!

Tonight, we'll see the Oklahoma Premiere of "3 References" (a Twitchy film I acted in and also have a song on the soundtrack of) and probably go out to the bar afterwards. Unfortunately, we have to leave early in the morning, so we don't get to see the other two Twitchy screenings tomorrow.

So far, from this experience, this is what I've come to realize: we are exactly where we need to be. Bare Bones is exactly what it sounds like: a festival for truly independent filmmakers that use any means necessary to complete their films. We are surrounded by DIY Filmmakers just like us. Its refreshing to attend a festival that celebrates that gritty hard work we have to go through as super micro-budget filmmakers. This is our first "real" festival to get into (we played a showcase and a festival in Austin in the past couple of months as well, but I'm calling this one "real" because we actually submitted through Withoutabox and went through the "will we get in?" experience) and it couldn't be more fitting. Hopefully, we won't be so "DIY" forever, but I will always appreciate this festival for showcasing rising talent. There is something almost noble in that. A lot of festivals are pressured to headline huge "independent" films to get butts in the seats and they hope that people will stay for the little guys. This festival is ONLY the little guys. And it's the 15th year of the fest. They must be doing something right. Right?