Ever since I learned how to hold a pencil I haven’t stopped drawing!  All my elementary school teachers were convinced I was going to become an animator from all the doodles and characters I would draw in my notebooks.  I’ve just always loved the feeling of moving pens, pencils, and brushes across paper, which is why I still animate all my films by hand using all three of those mark making tools.

I remember being 8 years old and watching the Academy Awards.  When the category for Best Animated Short Film came on I remember getting so excited finding out that a person could win an Oscar for making animations that I ran upstairs and started sketching a character I would use to make an animated short with.  Of course that short never got made, but the dream of one day winning an Academy Award has lead me to my career as an independent animation filmmaker.  I know that I wouldn’t be where I am today if I didn’t set incredible goals for myself.  Chasing that Oscar is still my greatest goal and it motivates me to continue creating quality animated shorts and to never stop animating and filmmaking!

In terms of when I first formed an appreciation for specifically claymation and stop motion, I can attribute that to Plonsters, a children's television program from the 80's about three plasticine monster characters produced using stop motion animation.  I used to watch the local educational channel as a kid because it was the only place to watch cartoons aside from Saturday morning.  These little plasticine claymation interstitials of monsters would come on and I would be fascinated how they could tell stories with no dialogue and just animation and the way the characters morphed into other objects.  This fascination would continue with Pee Wee’s Playhouse and those old Penny and dinosaur cartoons they had on there.  As a kid, I was always building and sculpting stuff out of plasticine but lacked the knowhow or technology to create my own stopmotion films…which would be so much easier if I were growing up today since everything is so digital these days. 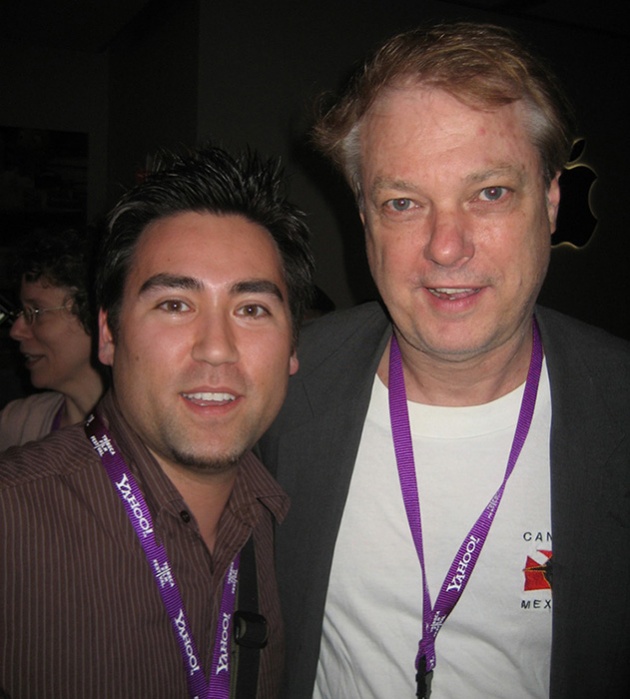 Me with one of my first independent animation inspirations, Bill Plympton, at a filmmaker party - Tribeca Film Festival 2008 where I was screening my short animated film, Yellow Sticky Notes.