Hello Bitsers! Since I dedicated my time to studies, it has been long after I posted the last blog here. However, exams are finished and I got some time to write again during off days. I have been watching movies for a week now, and most of them are about apocalypse. In other words, you can call it end of World. Apart from genres like action and thriller, Apocalypse is a sub-genre I am fascinated with.

Well, depiction of apocalypse in movies is not new; such movies have been in theaters since early part of last century. Some of them are showcasing the time after a disaster while some movies are are intended to start from a happy world and end with an apocalyptic catastrophe. Out of the movies I have watched, here is a list of few that are somehow picturing an apocalypse.

Movies' cast or full details are not included since the blog focuses on the apocalyptic synopsis.

An apocalyptic movie, that begins with the predictions of a mass disaster and eventually concludes with the prophecy coming true. The movie, in terms of having a foolproof story and the scenes of predictions coming true, was really good. Movie gives nice thrill of the coming apocalypse and scene showing complete destruction was something gets into heart. The world meets the end when waves from the sun set the planet ablaze causing life to vanish.

A time capsule set to be opened after 50 years, having imaginations of school children about the future after 50 years, is opened in 2009. Pages from the capsule are distributed to the school children having pictures and visions. Son of main protagonist, gets a paper having numbers written on it. His father, an astrophysicist finds that the numbers on the paper are dates and coordinates of accidents and tragedies happened in last 50 years and some yet to happen. At the end, an spaceship takes chosen children from the world, including same child who received paper with numbers, to a new planet while the rest on earth face the apocalypse.

Unlike the last, it is a post-apocalyptic movie, shows horrors of a world that has suffered global holocaust, almost bringing humanity to extinction. Crops no longer grow and some people have started to use humans as their food for survival. Many committed suicide to stop suffering from starvation or getting saved from cannibalism. Absence of power, bright sun light, plant life, and grey weather due to cold, gives an intense feeling of despair throughout the whole movie.

After the cataclysm, a widowed man with his son starts traveling towards west, while protecting his son from brutal cannibals, and finding food for survival. The man's wife, in the beginning loses hope and walks towards woods and never seen again. The movie ends when the father loses battle of life and his son meets a new family which was traveling towards the same way.

Released in 2008, Wall-E is an animated movie and is not an actual deadly apocalyptic movie but of a world have been abandoned. Even though the lightning and cinematography shows a world left alone with nothing but emptiness and tons of trash, the joy even in the beginning was exceptional. It differs from traditional movies of its kind since it does not give creepy feelings, instead it tends to turn into a fun.

A mega-corporation 'By-N-Large' encourages humans to move from earth to its giant spaceship when it begins to get contaminated with garbage produced by consumerism. After 700 years, a trash compactor robot on the planet finds a plant bringing twisting point in the scenario. Later on, Wall-E meets another robot Eve, who was sent to earth to collect any life-signs. The ending shows humans returning back to the planet after finding it habitable again.

Planet of the Apes

World does not get destroyed by a disaster in this movie; it switches the superiority. It is not less than an apocalypse for the astronaut who, due to a malfunctioned spacecraft, reaches a world in future which is ruled by humanoid apes. They have developed a civilization and run politics which is in its beginning. Humans are enslaved and used as pets.

The astronaut somehow manages to escape the planet and travel back in time, reaches the Earth which looks same as it is supposed to be. However, he gets stunned to discover that everything is in place except that that there are apes instead of humans.

The movie was released in 2001 and the story was loosely taken from a 1968 movie, having same name.

The Book of Eli

Eli, the movie's titular character is heading towards west coast of USA, passing through the remains of the country, thirty years after a thermonuclear war. Buildings and roads are destroyed; air looks dirty and there is lack of food and water. Houses are seen empty and dilapidated as he moves along. Although there are horrors of a mass disaster, there is a town supervised by a man Carnegie where, there is food and shelter.

The move main moves around the subject whose aim is to carry the only left Bible towards west where he believes it will be safe. On his way, he reaches a rebuilt town. The overseer of town was willing to get Bible to use it as a powerful tool to control people and build more towns. The man gets Bible, but he learns it is written in Braille while Eli reaches his destination and dies there.

The movie is not just a post-apocalyptic but a time travel film starring Bruce Wills as a mental patient. In 1996, a virus spreads out wiping out almost all of the humanity. The remaining take shelter underground. Wills is sent to 1996 from 2035, to stop the virus from spreading. A mentally unstable person who is failed to convince authorities about the virus, in the past, ends up getting killed. 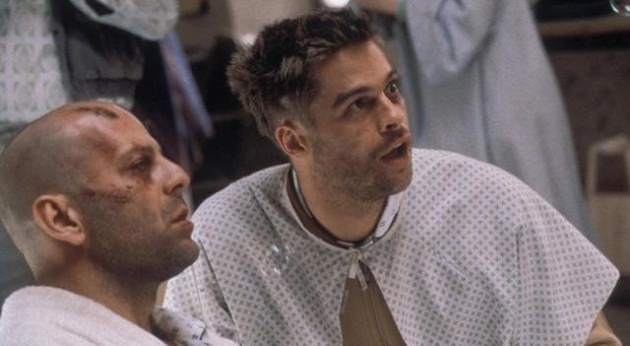 Along with Bruce, Brad Pitt amazingly played as another mentally ill person in the past, which is one of the factors that charged up the story. Moreover, the action in the movie was considerably good which merges with a future post-apocalyptic story really nicely.

Mentioned above are the ones I liked most but, there is a plenty of Zombie Apocalypse which is one of the trending fashions in movies.

This is all for now. Thanks!

All images are taken from Google.

52 Films by Women Vol 4. 42. Endzeit (Ever After) (Director: Carolina Hellsgård)

Pictured: Eva (Maja Lehrer) takes care of the employment hiring and firing decisions in the German-l…