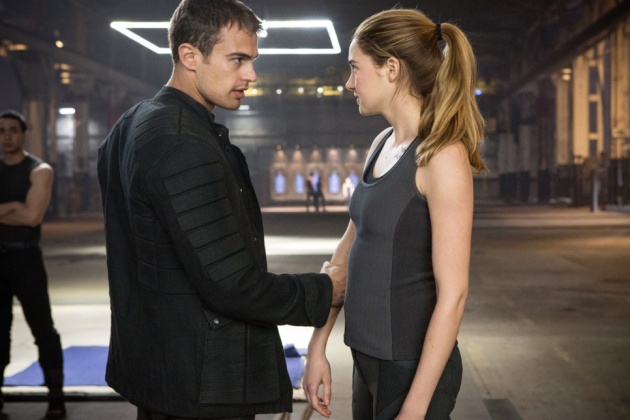 Interscope Records has partnered with Summit Entertainment to bring us the rockin' soundtrack to one of the most anticipated movies of the year -- "Divergent."  The soundtrack will be released on March 11th while the original score will be available on March 18th.  The movie opens nationwide on March 21st.

But you can pre-order the soundtrack on iTunes beginning today!

Here's the full press release on the "Divergent" soundtrack:

“We started working with songs from Ellie Goulding's album Halcyon and soon found that the texture of her music and the tone of her voice perfectly matched our film,” says Divergentdirector Neil Burger. “In many ways Ellie has become the inner voice of our heroine Tris.”

North American fans can pre-order both Standard and Deluxe editions of Divergent: Original Motion Picture Soundtrack on iTunes today Tuesday, February 25th. Those who pre-order either the Standard or Deluxe Edition (which includes additional songs) will receive instant downloads of Goulding’s “Beating Heart” and Zedd’s “Find You.”

Target is the exclusive retailer offering the deluxe version of the soundtrack on physical CD, with pre-orders now available on Target.com. Pre-order bundle options available atwww.divergentsoundtrack.com  include the soundtrack on 12" picture disc vinyl as well as a pre-order exclusive poster with the names of fans who order.

The film, which is based on the best-selling novel Divergent by Veronica Roth and hailed as the most highly anticipated movie of 2014 by social media research firm Fizziology, will be released in theaters and on IMAX® screens nationwide on March 21st. Divergent is the first installment in the Divergent Trilogy, which were the top three books on USA Today’s best-seller list in 2013. The story is set in a world where people are divided into distinct factions based on human virtues. Tris Prior (Shailene Woodley) is warned she is Divergent and will never fit into any one group. When she discovers a conspiracy by a faction leader (Kate Winslet) to destroy all Divergents, Tris must learn to trust in the mysterious Four (Theo James) and together they must find out what makes being Divergent so dangerous before it's too late.

The track-listing for Divergent: Original Motion Picture Soundtrack is as follows:

“Fight For You” — Pia Mia featuring Chance The Rapper

“Stranger” — Skrillex with KillaGraham from Milo & Otis and Sam Dew

“Dead in the Water” — Ellie Goulding

With the advent of technology specifically videos, easy and free access to internet, coupled with en…