Buying Ads For Your Indie Film

At the end of September, I purchased advertising space in a magazine for my upcoming feature film, TITANIA.  The film itself is still in the development stage, with plans to go into production in 2014. So, why buy an ad for it now?  - To make an introduction.

Over the summer I read an article with tips for getting your film made. In it, the author listed several points of advice, but none hit me as hard as the one that read "Is your director known? If not, get them known."

That resonated on a lot of levels - I've been making films for 20 years, but I'm not exactly "known". My films are very genre specific, and aren't playing in multiplexes.  But for investors to feel confident giving money to a production they need to see some recognition for the director and the project. It sounds obvious, but I really got it - maybe for the first time in my career.  I've had my short films screen all over the world and play online. But now I'm moving into my first feature, a bigger budget than I've ever had, and in pursuit of a "name" actor to come on board.

So, without a studio PR dept behind me, how do I get known? Here's what I've come up with, hope it's helpful to others!

1. PRESS - Your film is of interest to others: get an article written about you and what you're doing. We were fortunate and really excited to have HELL written about in Parabola Magazine (the foremost journal on myth in the world). That came about purely because the author happened to be following me on Twitter. But otherwise, I've gotten all my press by starting locally (journals, newspapers, blogs in my home city), and meeting people at events/cons/through friends who write for larger print and online publications, and have sent press releases to a lot of internet sites. Once you have a couple, put links to them on your website. Recently, a PR friend had me do this and I was shocked at how much press had accumulated over the years: LISA PRESS

2. PROMOTIONS - Those with experience like your project: Who do you know that knows someone that knows someone with clout that will promote you and your film? Best-selling author, Neil Gaiman was kind enough to tweet about TITANIA when we were shooting the prequel. An actress on NBC's "Dracula" is now following TITANIA on twitter and has retweeted us a couple of times. That's valuable because all of their followers are going to see what you're doing.  And it's also nice to have a nod from those whose work you've admired for years.  :)  Pull quotes of praise and make those prominent on your website. Again, start small - maybe it's someone who writes an online blog you like, it will grow from there.

3. PHOTOS - You're a successful director: a photo is worth a thousand words. Photos of you at film festivals, screenings, your premiere, and on set directing are great ways to show investors you know what you're doing and are serious about it. Post those on your blog, your social media stream, etc.  It's tangible and visual - they will immediately start thinking of you as a director.

4. ADS - This is a new one for me. While social media is a great tool, it still needs a little support. Someone doesn't know to find me on social media until a friend posts about my film, and that's if they saw it because they happened to be on their newsfeed just at the exact moment it came around. Therefore, how do I reach more people? Where is my captive audience?  Just about when I asked myself that question, there was a post on my Facebook feed for advertising in a print magazine I read. BINGO!  It's a niche publication and I look at every one of their ads, because they're beautiful and are artists/companies I'm likely to patronize.  So, why wouldn't someone feel that way about TITANIA? 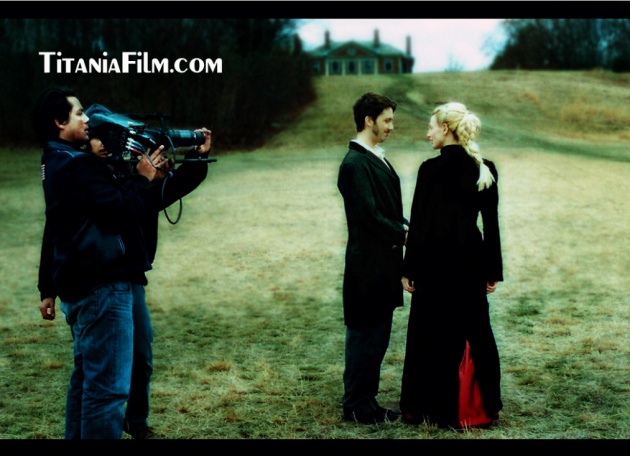 And here's the ad I created! I needed something simple, eye catching, that said I was making a niche film, and be conveyed in a 2 x 3 square. I could have gone with a simple beauty shot from the film, but by using a shot with my DP and camera in there, we figured it would pull more attention and get the message across immediately.

Now, advertising can be expensive, but niche publications will be more affordable (the ad above cost me $35 US and will be seen by thousands of readers across the globe) - not a guarantee, but a worthwhile investment. And I'm reaching people I think will particularly be interested in my work, because we share a common love for this genre. I've since decided to place another ad in a convention program where it will be seen by 6000 fairy tale fans, and buy space on their website for the year, leading up to their next con, where we'd like to show the film.  Again - the price was not exorbitant, because they have a more focused audience.  But this will help build my follower base and show investors that there are people out there who want to see my film.

I've pursued ads and articles and mentions all within the mythic/fairy tale genre that this film fits into - other genres would be magic realism, women's stories - not only because it's affordable, but because it's true.  This is my world, this is my group of friends and fans, this is what I love.  It's a focused place to start, but it will grow from there and find people in other genres, and those who like all genres. It's about being business smart, from the same place that inspired you to create your film in the first place.

Want to know one of my deepest, darkest secrets?? I'm a huge Kenny Loggins fan...Ok, that is not act…

QuerloYomibot Querlo, artificial intelligence with a heart, has recently joined a partnership with Y…