Curry Club at The Cherry Tree in Huddersfield 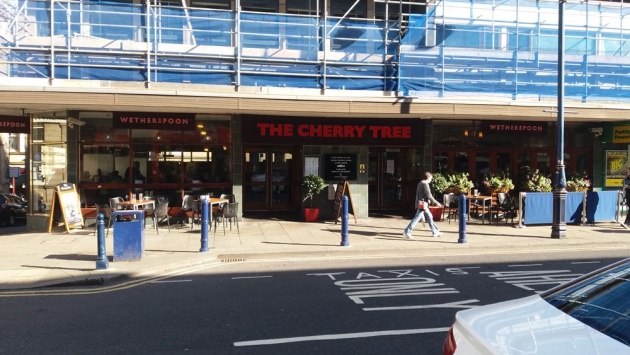 The Cherry Tree is a J. D. Wetherspoon's venue in Huddersfield town centre. Nearby parking is pay and display on street and there are multi-storey car parks further afield. The pub lacks its own car park, due to its location, so it isn't the easiest to park near.

The pub was visited on a Thursday lunchtime and was pretty busy with almost all of the tables upstairs partially or wholly occupied. As well as the main upstairs dining area, there is another additional one downstairs (which is still at ground level, as the ground slopes back pretty steeply). The downstairs area was the one chosen to eat in. Most of the tables downstairs were unoccupied, although there was some passing traffic to the toilets, which were also downstairs. The pub has windows on the front, rear and the left hand side, as viewed from the front, making the majority of it fairly well lit. Only towards the back of the pub near the bar was the lighting mostly artificial in nature.

The pub, like all Wetherspoon's venues, lacks table service. Customers have to pick a table, choose their food and then go to the bar to order and pay for it. The food is then brought out. This can be a bit inconvenient if dining alone, as it requires leaving the table unattended whilst visiting the bar. Ordering more food or drinks requires return visits to the bar.

Cutlery is brought to the table with the food, wrapped in a paper serviette. Bottled condiments are available on a side table; this included mango chutney as the pub was visited on the day when the Curry Club is sold. There are various different clubs available throughout the week, which have different specialities and include a wide range of hot, cold, soft and alcoholic drinks in the price.

The food was ordered from the Curry Club menu. The drinks were a draught Pepsi Max, which was upgraded to a full pint for 20p extra, and a bottle of Strathmore Clear sparkling mineral water. The Pepsi was as good as could be expected from a draught drink and the Strathmore Clear came in a chilled 500ml bottle. 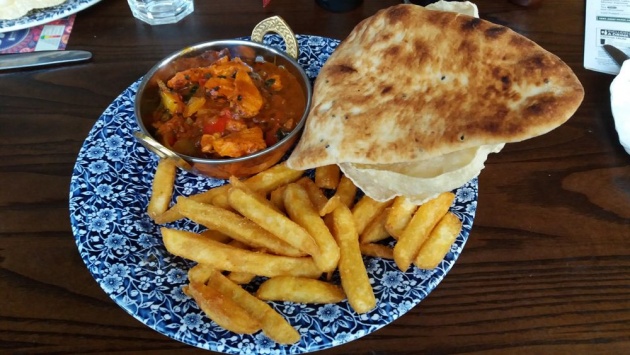 The first main course ordered was Chicken Balti. This came with a triangular piece of plain naan bread (which could be changed to a garlic naan for an extra 20p), two popadums and chips, which replaced the rice. An onion baji and a samosa could have been ordered for an extra £1.25. The chicken curry itself came in a metal dish on the same plate as everything else. The plate itself was a bit small for the fairly substantial amount of food on it, which made eating a bit tricky. The curry is classed as about medium, but how hot it will seem will depend on personal preference. For those accustomed to hot dishes, it wasn't that spicy. It did come in a fairly large amount of sauce. The naan and the popadums were fine, but the chips were a bit overdone.

The second main course was Chicken Jalfrezi. This came with a plain naan and two popadums, like the other dish, but the pilau rice was kept. In all other respects it was served identically to the balti, and was at a similar level of spiciness. It also had a bit more in the way of sauce. The rice was very tasty.

Both main courses were decent and of a good quantity. 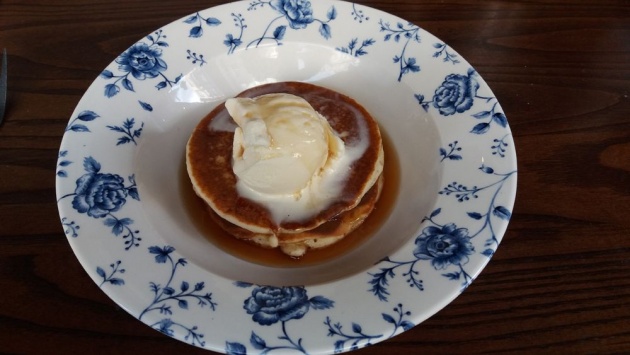 All desserts are available for £2.50 with the Curry Club, but two desserts can be had for £5 anyway from the main menu. Both desserts ordered were the American-Style Pancakes with Ice Cream, which would normally have cost £4.05 each. One was served with strawberry, blackberry, raspberry & blackcurrant compote and the other with maple flavour syrup. Each came with a stack of three warm pancakes, with a scoop of vanilla flavour ice cream on the top.

Both had the sauce poured on top of them; normally the maple flavour syrup comes in a separate jug which is better. The compote also had several whole pieces of fruit as well. This is quite a filling dessert, but having the maple flavour syrup poured on prior to getting it is a mistake, especially if the ice cream melts, which it can do if left too long. Fortunately in this case it hadn't.

The total cost of the meal including drinks came to £18.18, which isn't bad for a two course meal for two people. The quality was pretty decent, with the only real problems being with the slightly overcooked chips and the maple flavour syrup already being on the pancakes.

The lack of table service can be inconvenient, but with two dining this wasn't a problem. The service was pleasant and friendly, although being downstairs meant that the main course plates weren't cleared away until the desserts were brought out, due to there being a lack of passing servers.

This isn't the most convenient pub to park near, but if you are already in the town centre, this isn't so much of a problem. Overall, The Cherry Tree provided a decent quality meal at a decent price with a decent quantity as well.

What Need for Make Spice Sambhar

Curry can’t save day in Game 1