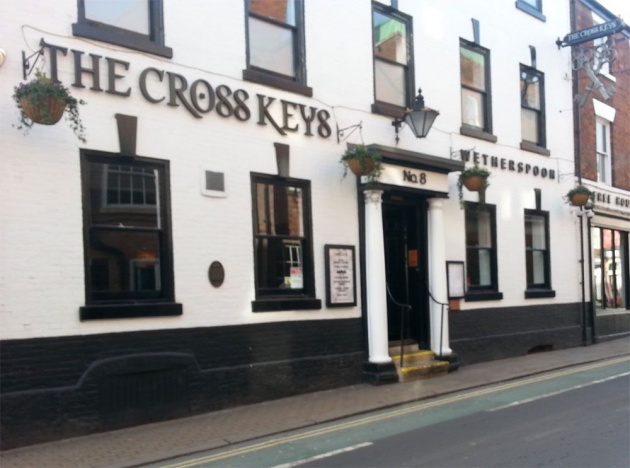 J. D. Wetherspoon's operate a large number of pubs across the UK, and are also part of the same group as the Lloyds No 1 chain. The Cross Keys is a pub in the chain on Lairgate in Beverley in East Yorkshire. Lairgate itself is part of the one way system through Beverley, and therefore there is only one approach by vehicle to the pub. The pub itself is in a Grade II listed building that dates back to the 18th century and has a beer garden to the rear side, but lacks its own car park. There is a short stay car park in Market Place, but this may not allow enough time, and there is pay and display street parking past the pub, which is generally cheaper than the car park in Market Place. During busy times, especially on Saturday's when the market is open, parking may be an issue. 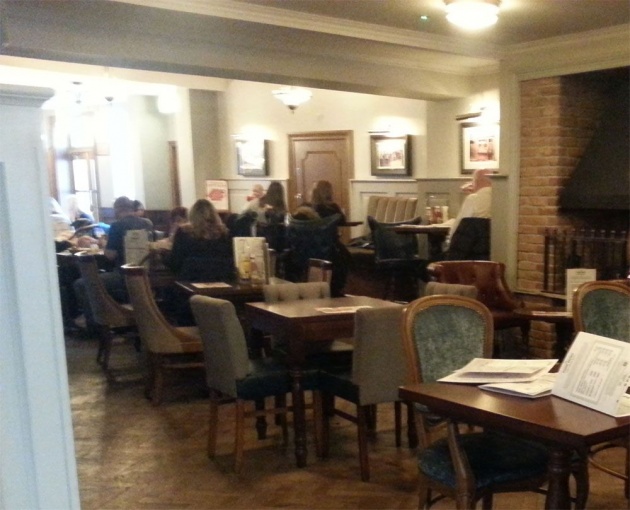 The pub consists of a number of separate areas, probably because of it being in a listed building. There are a couple of eating areas to the front of the pub, near to the front windows, a rather dark section that has a real fireplace that leads through to the bar at the rear, and the bar itself, which has quite a bit of natural light. Toilets, except for the disabled, are located up a couple of flights of stairs. The table chosen was in the centre section, which was lit by artificial light, and the fire was burning wood, which was putting out quite a bit of heat. 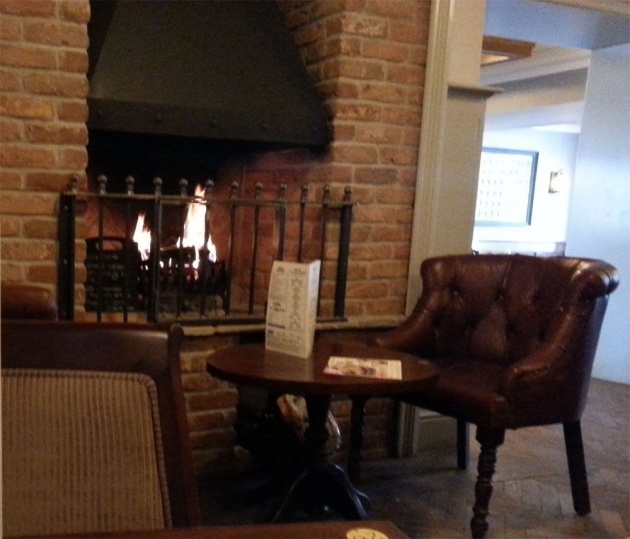 In The Cross Keys, patrons first need to find a table to sit at. Once they are ready to order, food orders are placed by going to the bar, and are also paid for up front. Food is brought out to the table, but there is no table service, so further orders of food and drinks require repeated visits to the bar. Cutlery is brought out with the food, wrapped in paper napkins, and trays of bottled condiments are available from a table. Wetherspoon's pubs have a range of craft and world beers, both in bottles and on tap, with different beers being cycled through. 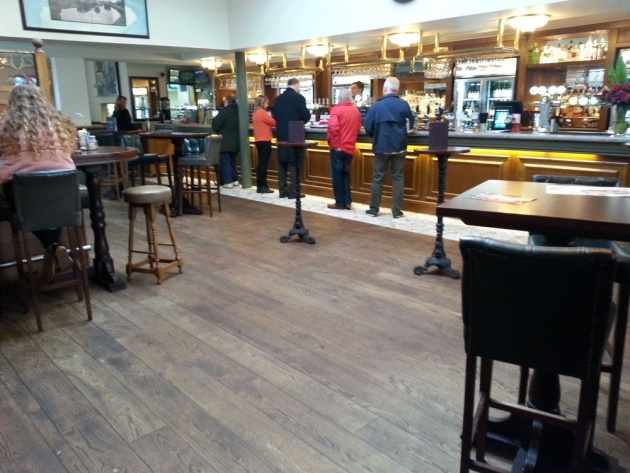 The pub was visited on a Friday lunchtime and was very busy when entered, with many of the tables occupied. During the visit, the amount of custom did decrease substantially. Wetherspoon's have a number of Clubs available through the week; Friday's is fish & chips (it lacks the range seen on other days), which comes with a range of hot and cold non-alcoholic drinks for £6.65 or with a range of wine, beers and spirits for £7.65. With the clubs, all the desserts are available for £2.50, but a couple cost less than that anyway, and two can be purchased for £5. The food ordered was from the regular menu. 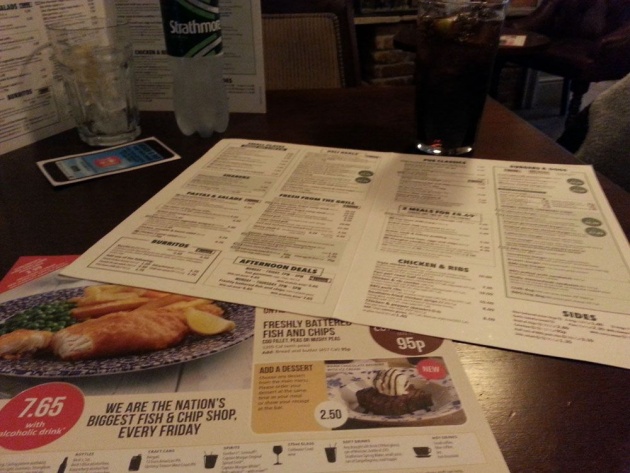 The meal ordered came with an included drink. This could be from a range of hot and cold non-alcoholic drinks, including tea and coffee, or, for £1 more, from a range of alcoholic drinks, including beers, wines and spirits. The drink chosen was a 16oz glass of draught Pepsi Max. For 20p more, this was upgraded to a pint glass. The Pepsi Max was as good as can be expected from a draught soft drink. 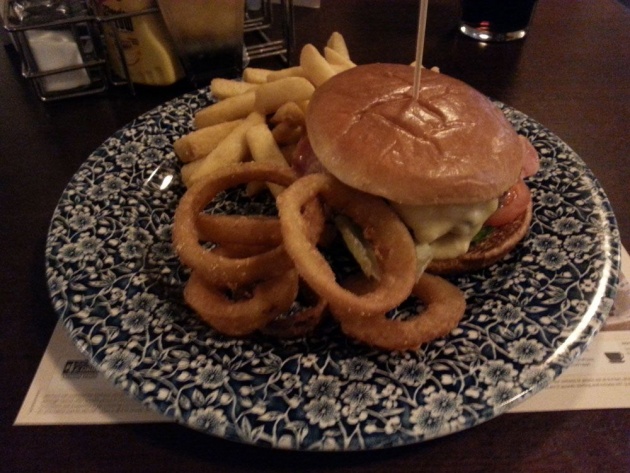 The main course ordered was the Welsh Rarebit Burger, a new item for the menu. This was a 6oz beef burger served in a bun that was hold together with a wooden skewer. As well as the burger, inside it it had lettuce, sliced tomato, sliced red onion, two slices of bacon and rarebit sauce (Welsh rarebit is a type of cheese on toast). The rarebit sauce was soft and consisted of cheese, British amber ale, Worcestershire and English mustard. The burger was accompanied by a portion of chips and six battered onion rings.

The plate was warm; it's always a good idea to serve hot food on a hot plate. Everything was cooked just right. The chips were fresh and hot, and hasn't been overdone, but were perfect. The onion rings were fine and the bread bun for the burger was fresh. The lettuce had clearly been chilled just before it was used. The bacon was free of fat, and was perfect, and the Welsh rarebit sauce was interesting and different. 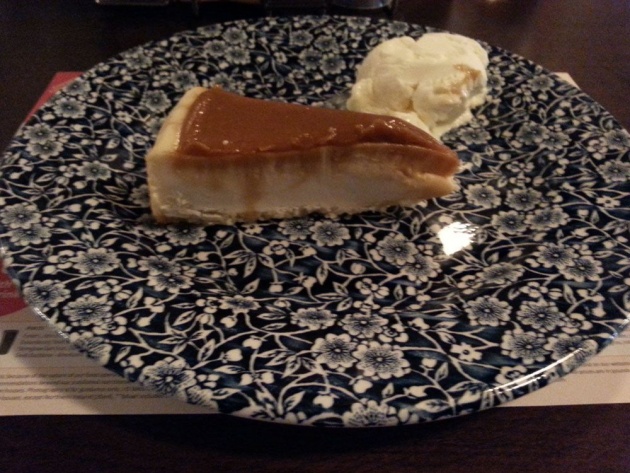 The dessert chosen was Eli's Salted Caramel Cheesecake. This comes on its own, but a scoop of vanilla flavoured ice cream can be added for 65p extra, and this was chosen. The cheesecake has a soft biscuit base, quite a gooey caramel topping and seemed to be a baked one.

This was served on a cold plate, which is of course preferred for a cold dish, especially one that includes ice cream; otherwise, it can melt all over the plate. The cheesecake was quite filling and the caramel topping added a nice, gooey taste to it. If there was anything wrong with it, it wasn't with the dessert but with the plate - the plate was so large, being a main course plate, that the cheesecake and ice cream looked lost, making it appear smaller than it actually was. A dessert plate would probably have been a better choice of crockery.

The cost of the meal, including the drink, came to £9.59, quite reasonable for a two course meal. The quality is above what you might expect in a McDonald's, and the price is a bit higher, although it's lower, as is the price, than you might see at the Gourmet Burger Kitchen.

Both the main course and the dessert were served very quickly, given the level of custom, and the cutlery was clean, as was the entire location. The food was all cooked perfectly; nothing was either under- or overdone, and the ice cream had been brought out very quickly after the dessert was ready.

Parking has the potential to be a bit of an issue at busy times, but the biggest inconvenience, when dining alone, is the lack of table service. Having to go to the bar to place orders and pay means leaving the table unattended, so that either something has to be left there, showing it is occupied - and in this location, the majority of the tables are not visible from the bar - or coming back to find someone else sitting at it.

The Cross Keys in Beverley provides a decent quality meal at a decent price, and is recommended for diners wanting a step up from a sandwich bar or fast food restaurant; a single course is not that much more expensive than either of those places.