There is a certain magic to mythology that captivates and enthralls us all. Despite whatever modern beliefs we hold to be true, many people still look fondly on the creation stories we were told from when we were children. Director Damien Krisl is one of the many who has a curiosity and fascination with Greek mythology - specifically with the goddess Amphitrite, wife of Poseidon.

The knowledge we have on Greek mythology is largely based on the works of art depicting the stories of Greek gods and goddesses. Little is known about Amphitrite, and this is in part to the Olympian pantheon's influence, labeling her as merely a consort of Poseidon. The result was a lesser told story, which thankfully Krisl has taken over in his film. In "Amphitrite," Krisl takes the reigns as a modern day storyteller, and presents us with a fashion film about the invocation of this underwater and underrated sea deity.

While underwater fashion photography is not necessarily a new idea, Krisl's film is refreshing because of the use of underwater technology paired with his vision of Amphitrite. The goal was to show the contrasts of beauty and strength, feminity and evilness, and fire and water. A symbol was created to represent these elements, a delicate seahorse with the wings and fire-breathing evilness of a dragon. It is as if to show that the immediate assumption of a goddess is striking beauty, but lying beneath the surface is a deeper story that can only be told through fashion and Krisl's imagination. It is his entire concept that brings this film and story to life.

"In the fashion genre you can do experimental movies," says Krisl. "You can edit anyway you like, you can color grade it, and you can mix it with the effects you want. Fashion is very beautiful and you can create what is in your imagination."

The result of Krisl's vision and 20 hour long shoot was a work of art that captured stunning colors and forms. The dress, in actuality, was not one but many. Deisgner Patrick Sonberger created dresses of varying lengths and color to differentiate movement within the water to replicate Amphitrite's fire. A special casing for the Red One camera was also created for this shoot, in order to properly capture the model above and below surface water.

Technicalities aside, Krisl's film is a gorgeous display of what can properly be done within a fashion film, and that is to tell a story. The model could have strutted each dress to an obscure electronica soundtrack, but the beauty of the dresses would have been subjected to only one perspective, and that is simply as garments. Vice versa, a film without proper visuals, specifically a fashion film in need of fashion visuals, the story would have equally been lost. Together, just as fire and water within the "Amphitrite" - fashion and film beautifully collide and tell a story. This one just happened to be lost within Greek mythology. Bravo Damien Krisl! 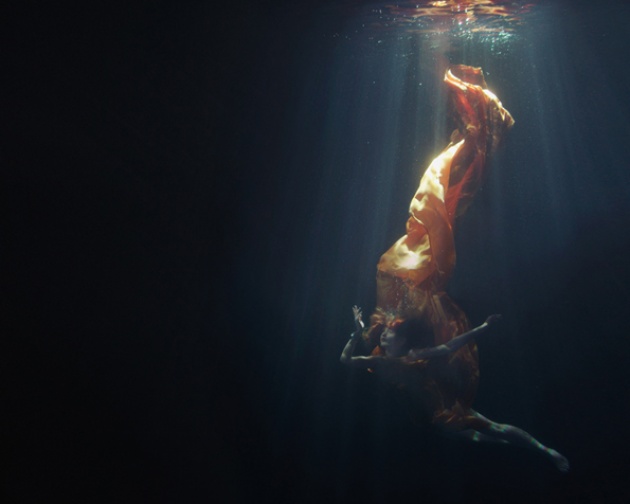