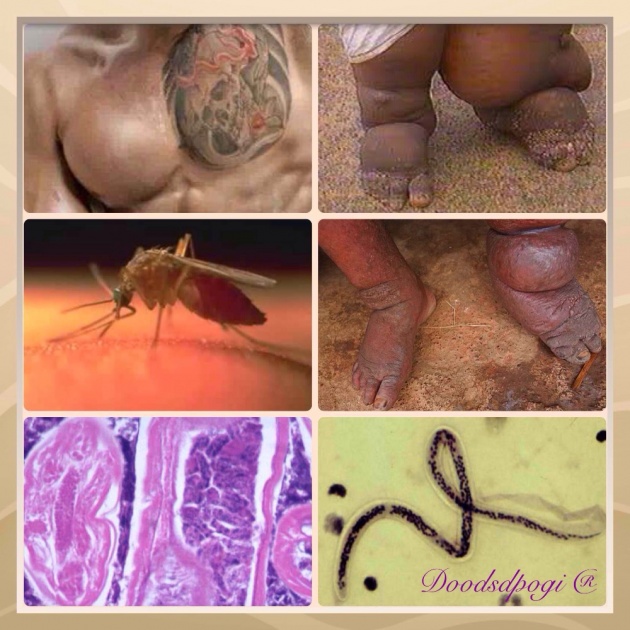 The Filariasis awareness month is being observed in the Philippines during the month of November. For the information, Filariasis is one of the country's most serious parasitic diseases and public health problems. Filariasis is also the second leading cause of permanent and long term disability in the Philippines affecting 42 provinces across the three major inlands herein that endemic for the disease.

Filariasis is a parasitic disease caused by microscopic thread-like roundworms called "filariae." The disease is of three types according ti the area in the body which the worm occupy: lymphatic filariasis (lymphatic system, including lymph nodes)' subcutaneous filariasis (far layer of the skin) and serous cavity filariasia (cavity of the abdomen). Arguably, the most serious is the lymphatic filariasis.

In the cases of lymphatic filariasis, the adult worms live in the lymph nodes and vessels of human host. They mate and produce millions of microscopic worms called microfilariae which circulate in the person's blood. When a mosquito bites the infected person, some of these microfilariae will move into the mosquito and consequently grow in this vector. when the same mosquito bites another person, the worm will be transmitted into the person, travel to the lymph vessels and grow into adults; thus repeating the cycle of infection.

According to study report, the repeated mosquito bite from infected mosquitoes over several months to years are necessary to get filariases. The disease is also most prevalent, almost exclusive in tropical regions of Asia, Africa, and Central and South America. People who are living in these areas for a long time are most at risk. It's the disease affecting 120 million people. Lymphatic Filariasis is a serious public health concern in over 80 countries across public the aforesaid regions.

Perplexingly, most infected people have no symptoms. They will mot know that they have lymphatic filariasis unless tested. As the worms build up gradually in the lymphatic vessels, however, the lymphatic systems ability to fight infection becomes compromised. As such, people with disease may start to have more bacterial infections in the skin and lymph system. They may also have fever, painful or swollen lymph nodes in the neck, and groin and pain in the testicles. Worse, the build up of worms may cause lymph fluid to accumulate in the arms, legs, breast and male genitals. This is called lymphedema - localized fluid retention and tissue swelling. For people with lymphatic filariasis lymphedema will mostly occur in the legs. The swelling can usually progress to a grave condition called elephantiasis -hardening, thickening and sever swelling and all other symptoms of lymphatic filariasis can develop several years after the onset of infection.
the problem becomes complicated, however when the patient has developed lymphedema or elephantiasis. While medication are prescribed to lessen the swelling and discomfort, patient who have either of these symptoms must ideally have bed rest.

To improve lymph flow, swollen limbs must be exercised and moved. Secondary infections that may have arisen because of the compromised lymphatic systems are treated with intravenous (IV) antibiotics. For worst cases, deformities like enlarged limbs and scrotum are addressed through surgery and/or skin grafts.

Filariasis is classified as a neglected tropical disease - a tropical infection especially prevalent in low income populations. The treatment cost mass drug administration programs is only around $0.50 per person, per year. However, because they mostly affect the poorest if the poor, basic diagnostic and treatment measures are not economically accessible for most sufferers. As it is left untreated, the sufferer's productivity is limited making it difficult for him to earn a living and hence trapping him in a cycle of poverty and impairment.

This was especially tree for the cases of lymphatic filariasis in the Philippines, more so in the past. The disease was highly prevalent in at least three regions. At this time, around 26 million people across the archipelago were estimated to be at risk for filariasis. This was placed under the communicable disease control service.

Epidemiologists are always on the look out for new cases such ass these so as to channel filariasis elimination efforts into areas where they are needed the most. The filariasis screenings tests and medications through health centers nation wide.

(Thanks to Jose Ma. H. Zadarriaga)