Everything was fine until she opened her mouth! 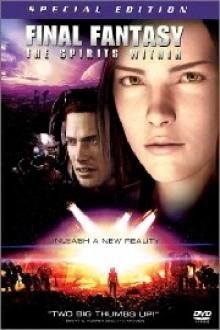 Based on the Final Fantasy series of games created by Hironobu Sakaguchi, Spirits Within was the first entirely computer generated film that aimed to create photo-realistic characters. And at a cost of $137 million, it is still to this day, the most expensive video game inspired movie ever made.

As a technical exercise then, Spirits Within is actually quite impressive. The locations, vehicles and alien designs are nicely rendered, and everything looks solid and realistic enough within the context of this science fiction narrative. As for the human characters, well lets just say the technology available in 2001 wasn’t quite up to the task. Small details like the eyes, hair and skin seemed realistic enough, even in close up, but once these ‘people’ open their mouths and start talking, the illusion is destroyed.

Which is a shame, and unfortunately, a story that would have greatly benefited from real live flesh and blood actors, never becomes something you can emotionally connect with. There’s always something a little off-putting about each character. General Hein’s (James Woods) eyes seemed to be a smidgen too high in their sockets and he often appeared to be looking at his own eyelashes. Doctor Aki Ross’ (Ming-Na Wen) movements always seemed unnaturally perfect and smooth. And none of the characters facial expressions were totally effective at communicating the emotion in each scene. Especially during the more dramatic or comical moments.

Story wise, Final Fantasy: The Spirits Within isn’t all that bad, though its themes of compassion over fear, and love over hate are certainly nothing new. The plot details are interesting enough however, and the movie’s impressive voice cast certainly do the best they can with the perfunctory dialog they get. Ultimately though, Spirits Within never amounts to much more than a collection of video game level bookend scenes. Technically impressive but emotionally vapid.

Die hard fans of the computer game, and science fiction movies will be entertained. But for everyone else, you might want to steer clear of this technical marvel. The movie is rated PG-13 for some mild sci-fi violence.

This film still looks great, and the computer generated images are sill impressive over a decade after its first theatrical run. If a theater were to screen this movie again, that would be your best option. At home a HD rental on a big TV is the way to go.

Despite the difficulties properly expressing human emotion, the computer generated visuals are still the single best reason to see this film.