I have written many blogs on different topics in the past few days. All those topics were about health and related stuff. Today, I have decided to change my taste. So, today I am writing a review of a Hollywood animated movie Ferdinand. This movie is basically about a bull which was once a cute calf who ran away from its birthplace because of the bad behavior of the master who owned them. But somehow, he managed to escape leaving behind his friends and dead father who was killed by a hunter in a bullfight in front of the whole crowd. He was sad about what had happened and could not do anything except run away for his own life. That calf grew up and became a very strong bull. What happened to him next? Let us see in the blog.

Before starting the review, I would like to tell you that this movie is made by BlueSky Studios and 20th Century Fox Animation which hold a good reputation in the industry of animated movies.

Ferdinand was living in Casa Del Toro which means Bull's House. His dad was living there and was the most strong bull in there. No one could ever defeat him. There used to be a fight in which all the bulls have to fight with another and the winner was sent to a sports known as Bullfight.

Bullfighting is a physical contest that involves humans and animals attempting to publicly subdue, immobilise, or kill a bull, usually according to a set of rules, guidelines, or cultural expectations.

Ferdinand was living a happy life without knowing anything outside of that house. He was different from the other calves because he does not life to fight like the others and instead, he loved flowers. You can say that flowers were his weakness. His fellow calves used to tease him for not being like them and he seems to not to care about what they say. He loved his father and watches the flowers. One day he saw his dad fighting with the other bulls and a man was watching them while fighting. Ferdinand's dad defeated all the other bulls and that man choose Ferdinand's father for the bullfight in which he never knew that he was going to die. He went on a truck and said goodbye to Ferdinand and never came back.

Ferdinand was really worried when his father did not show up until the evening. His dad's bull friends told him that you are not going to see him again. This was the time when he decided to run away from that Bull's House and he did it.

Those were the very sad moments when he realized that he is not going to see his dad again. The background music effects made the environment more touchy and I really felt for the little calf.

Ferdinand went all alone but he was lucky that he found Nina. She was a pretty girl who lived with his father and a dog in a village. They all became good friends. All of them especially Nina took a great care of Ferdinand and he grew up a big strong bull. He always loved to go out and watch the beauty of nature and smell every kind of flowers there. But as he grew up people begin to afraid of him because of his giant size and ferocious looks. So they decided not to take Ferdinand on annual flower day and he did not want to miss that.

Despite, they asked Ferdinand to stay at home and do not come to the fair, he still went away and caught the attention and made a lot of mess there. The authorities came in looking for him and he was caught by wildlife organization. A Few hours later, he found himself exactly there from he escaped in his childhood.

Get-to-gather with the Old Friends

He finally reached the Bull's House in his full youth. When his childhood friends saw him, they exactly imagined him like his father because he was just like his father. No one was going to be his friend again except the old goat. She became her friend and lived with him throughout the movie. That old goat is a bit of funny character in this movie. All her dialogues are awesome but if the makers would have given her some better looks, then it would be a great entertainment to watch.

Anyhow, Ferdinand was just uncomfortable in that house and wanted to go back to Nina. He asked everyone to escape and run for their lives but nobody listened to him. Everyone tried to fight with him but he did not even lift a foot to them because he hates to fight. He was a big bull with a very small heart. We all know the purpose of Bull's House. It was meant to sort out the toughest and strongest bull so that it could be sent to the bullfight and somehow, they all begin to fight each other and to the viewers' surprise, Ferdinand was the only survivor in the end. He was selected for the bullfight where he has to face his death.

Ferdinand decided to escape from that Bull's House along with his friends. Somehow, he succeeded in doing this but the problem was that the Bull's House owner was still behind them so that he could capture Ferdinand and the rest of the bulls. Ferdinand knew this thing so he managed to escape his friends and thrown himself in the way of his killer. They captured him and brought him to the bullfight. He did not fight with the bullfighter. He ordered to hit him so that he becomes angry and run towards him. The bullfighter managed to hurt him and he became so angry that he held him on his horns and could have easily killed him. Suddenly he saw a flower under his foot and his heart got soften and he pulled him down. Ferdinand smelled the flower and felt its scent and remembered his old days.

The bullfighter came back with a sword to kill him. Ferdinand knew that he is going to kill him with his sword. But he was not afraid of him. Instead, he sat down in front of him with his cute face. Seeing this, people begin to chant "save the bull, let him live". The bullfighter spared his life and he went away with Nina but this time, he was not alone. His friends from Bull's House were with him.

This movie is awesome to watch especially, the graphics. This movie was released in 2017 and I am guessing that the graphics quality has been increased a lot up til now. The natural scenarios have really inspired me and the little cute calves were really beautiful. Not only visual effects, the sound effects were also worthy of praise. The music they have created and used in this movie is touching. I think the music of every scene fits and the voice behind every character suits. 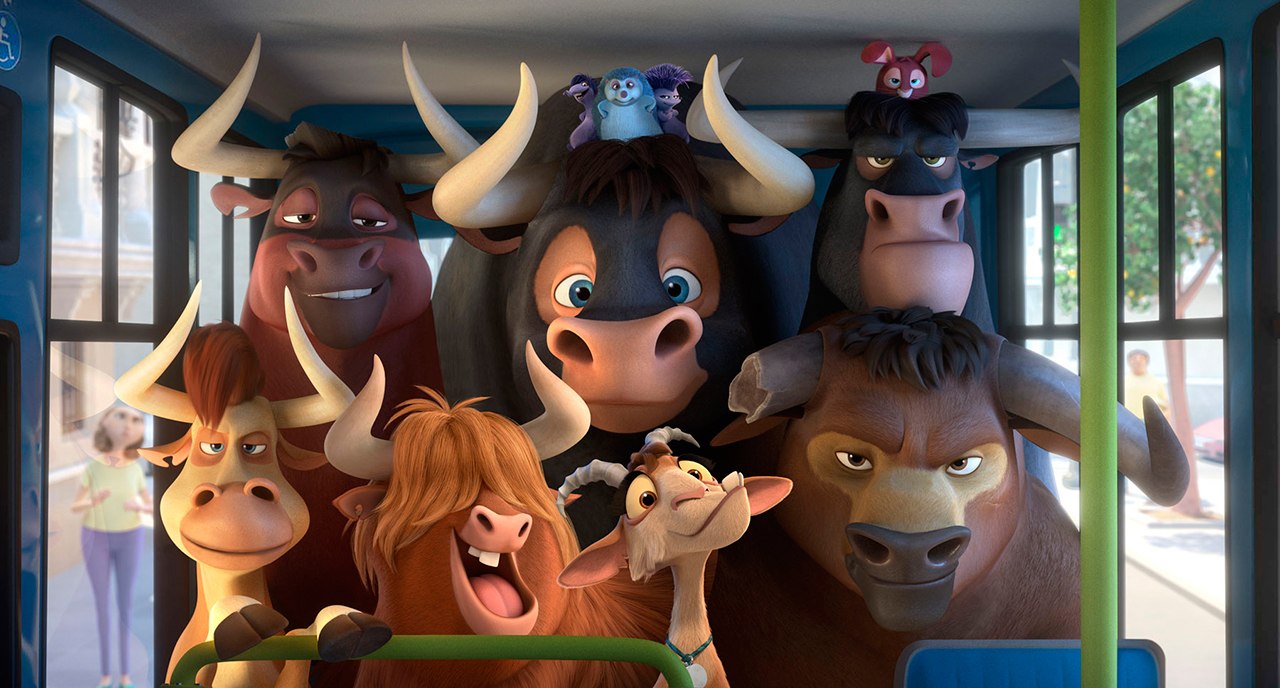 The only thing which I disliked is the goat's character. I mean the character is not bad but its looks are a bit of scary type. Rest of the movie is a hell of an entertainment. I would love to recommend you guys to watch this movie along with your kids. You and your kids are going to love this epic movie. Meanwhile, its trailer is given at the end of the blog so that you could have a better idea of this movie.