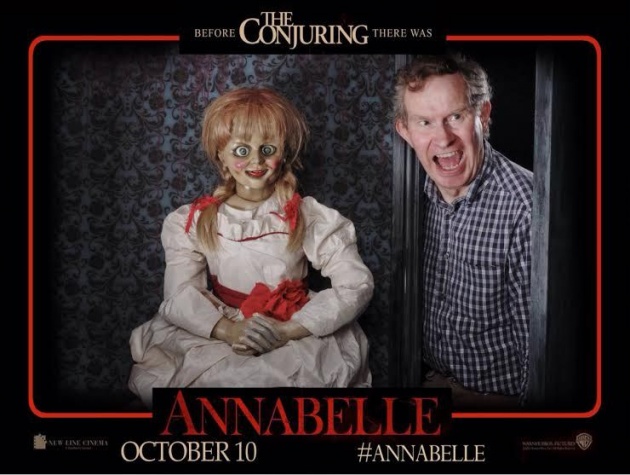 The real Annabelle is a squat-faced bean-bag clutch toy, with triangle features and patchwork home-made look. Even the smallest dog would tear it to rag ends, with an irritated snort. It definitely isn’t a collectable, though – you imagine it rather collecting dust. It’s the sort of child’s comforter that might be stitched away in Smokey Mountain. Amongst the dried chickpeas and cotton wool for filling, you might find inside it shredded hardware store receipts, straw, maybe chicken feathers.

Wisely, the makers of the 2013 hit horror film, THE CONJURING decided that a possibly possessed doll really ought to look like a ventriloquist’s dummy, with a painted hardwood face, stick on hair (braided, of course) plastic, dead eyes and partially rouged lips. When the light catches it, it might appear to speak, forming its first word, ‘prequel’.

Set in 1970 California, ANNABELLE, directed by cinematography John R. Leonetti and written by Gary Dauberman draws, I would say insensitively, on the life of Roman Polanski, whose wife, Sharon Tate, was murdered by Charles Manson’s cult. The main character is called Mia (Annabelle Wallis), a nod to Mia Farrow, the star of Polanski’s hit horror film, ROSEMARY’S BABY, in which the titular heroine is inseminated by the Lord of Darkness. Leonetti and Dauberman don’t so much retell this story as use it to inform our expectations. Mia is pregnant. She is stabbed earlier on by one of a pair of crazed intruders. Could this affect her unborn child? There is also a kindly bookstore owner, Evelyn (Alfre Woodard), who proudly displays a novel entitled ‘The Devil’s Welcome’. Could she be part of a conspiracy? Then there is the apartment block that Mia and her husband John (Ward Horton) move to. There is noise from the apartment above, loud, threatening.

The doll Annabelle is brought into Mia’s house by her husband as a present; not exactly something for the baby – it might crush it – rather to add to her collection. It dwarves Mia’s other dolls and suggests an Ingall sister from LITTLE HOUSE OF THE PRAIRIE, one who might have rolled down a hill to terminate a pregnancy. After Mia and John face two intruders, the doll is cradled by a cult member, the daughter of their next door neighbour, shortly before she slashes her own neck. You expect the doll to be bloodstained but the apparent suicide takes place off-screen (this isn’t a hard R) so we can make allowances.

The doll appears to have a life of its own, rocking backwards and forwards and appearing to embody the spirit of the neighbour’s daughter. In an early scene it appears to be responsible for causing a fire, somehow switching on the electric hob on which is sitting a pan full of popcorn encased by foil. John puts the doll in the trashcan but somehow it makes it, rough and ready, in the move to their new apartment.

John is a doctor who works night shifts and takes trips out of town and this increases Mia’s vulnerability. Spooky things continue to happen. A priest (Tony Amendola) gets involved but it is only after Mia gets help from Evelyn that the doll’s motives become clear.

ROSEMARY’S BABY is the only film to which the makers pay homage. Mia discovers a serious of children’s drawings that show her pram being hit by a truck – and sure enough this is a prediction of the future in an OMEN kind of way. There is a bravura piece of staging when an attack on John and Mia’s neighbours is shown through their window and a big scare when a girl appears to be running towards Mia in her house and then turns into a woman.

As with all horror films in which we appear to know more than the central characters, we find ourselves chuckling drily as we anticipate what might happen to them. I never find this a satisfying form of entertainment – it is equivalent of looking down at the film. If the makers direct us to respond in this manner, this feels cheap too. This is why horror is one of my least favourite genres.

I wondered whether in early 1970s California, an African-American woman would be able to secure a lease on her own bookstore on her own and not attract hostile responses from her neighbours. Evelyn is cast as an African-American precisely to overturn such suspicions, that she isn’t a force for evil, but I was troubled by her actions at the end. Would she really empathise with Mia to the extent that she does? I would have thought that she would have gotten the hell out of there.

ANNABELLE has exploitative elements, though not obvious ones and isn’t a slavish carbon copy of THE CONJURING. But it isn’t a full on scare fest. Its ambition is rather modest. Its contemporary resonance is limited to the suggestion that cults may form a serious threat to society, not so much the Lord’s Resistance Army in Uganda but Boko Haram in Nigeria or Islamic State in Syria and Iraq (though the latter could not have been foreseen by the filmmakers). The sound works hard to edge us off our seats and the music by Joseph Bishara is a compendium of shock effects. The really false note is the absence of cigarettes, but these days, movie studios are trying to discourage the habit – less money for movie tickets, after all.

Reviewed at Cineworld Haymarket, London, Friday 3 October 2014, 18:45 screening. With thanks to Substance001.

Picture: the reason why you should never ask for a selfie with celebrities