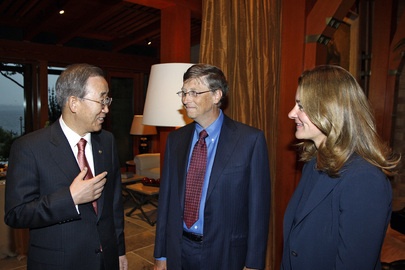 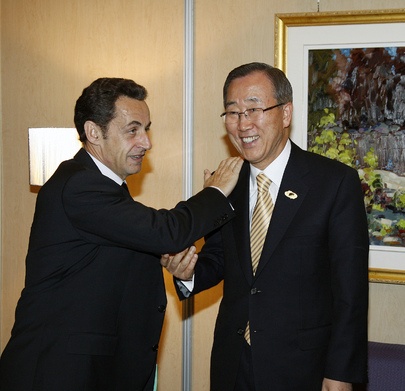 The momentum may seem distant, but it will become more dominant now that French President Sarkozy has announced the intention to move forward with a financial transaction tax, unilaterally. The United States and the United Kingdom, domain to the largest financial markets, have resisted such taxes which are vehemently opposed by larger financial institutions. The idea/initiative has been around for some idea, especially since the financial crisis. It has been promoted by leading entrepreneurs as Bill Gates to fund a variety of social causes but also as a manner for banks to pay back the benefits of bailouts. Read: - “Why Financial Tax?” - www.filmannex.com/posts/blog_show_post/why-financial-transaction-tax-money-flash-by-ambassador-mo/40599 (Top Photo - Secretary-General Ban Ki-moon (left) meets with Bill (centre) and Melinda Gates, Co-chairs of the Bill and Melinda Gates Foundation, for a breakfast inside their home in Seattle, Washington. The Bill and Melinda Gates Foundation has worked with the UN to help achieve the Millennium Development Goals.) However, at least until now, the resistance from Washington and London has been determinative in blocking such tax. On the other hand, unilateral application has been considered unlikely as it could position a country imposing such at a competitive disadvantage. It was going to be all the big free market economies or none. However, Sarkozy’s move breaks the inertia. Sarkozy has put the tax on the agenda for late summer 2012, but France has elections for President this spring that he could easily lose. Sarkozy’s initiative though is likely to survive him even if he loses the elections, as the more left Socialists who oppose him are not likely to back off such a popular move among the France’s electorate. “Occupy Wall Street” is a natural backer, but the notion of a financial transaction tax has broader appeal even in corporate boardrooms. High frequency trading to other forms of more predatory market practices have made banks/financial institutions targets, right or wrong. Financial transaction tax initiative has a broad constituency across borders.It is also endorsed by many/most UN related institutions - (Bottom Photo Sarkozy & UNSG Ban Ki-moon). Unleashed, the tax initiative will take hold – ironically it may also have the greatest impact in addressing budget deficits in those countries where financial markets/institutions have the largest presence, the US and UK. France expects to raise a billion plus Euros a year. The amount could be significantly greater for US and UK and might also rein in predatory practices as high frequency trading. Ambassador Muhamed Sacirbey - FOLLOW mo @MuhamedSacirbey Facebook-Become a Fan at “Diplomatically Incorrect”       Twitter – Follow us at DiplomaticallyX