Lavish lifestyles are few and far between in this day in age. With now over 50% of marriages ending in divorce and so many kids having to go through the struggles of being bullied or picked on. Things just aren't how they used to be. It's not 25 cent bubblegum and going to play soccer out in the streets. It's 3 bucks for a monster and where can I score some drugs, for most teenagers.

Unfortunately that is not me. I grew up with 2 older brothers and one younger sister, every thing seemed so well oiled in our family. We would have days where we would go to the park and other days were for going to the Zoo or even Sea World! Everything was moving along swimmingly until my parents thought it would be a good idea to purchase a home in 2007 while all of the homes were very low and the banks were handing out money like it was dirt. After a few parties and a few new rooms added to the new house... Stock market crashes the first REAL recession since the Great Depression. In that period of time my mother left my dad screaming, and while he was crying on the floor and only I was there to feel the true pain of a man who had truly lost it all, except his kids for that matter.

Once my parents were officially divorced, that left me in a state of depression that I never really found the way out of. To this day I am still pained, I have found a way to mask the pain in my face. But at what cost? Through the next few years I have been faced with both parents bickering and trying to use my sister and I as weapons in order to "win". It is a numbers game that one side wants no part of. That side being my dad. During the recession his mortgage quintupled and he sold the house in a short sale for 1/5th of its worth. He then moved into a set of nice apartments where he then married again.

Life was moving but then I was faced with the troubles of middle school. T'was a tedious point in my life. Every male has the testosterone of a bull and every female has so many raging hormones they don't know how to handle themselves decently. I got into a nonsensical "bully radar" in 7th grade when I bumped into a kid and he elbowed another boy in the face resulting in a black eye while playing American Football. All of the kids then blamed it on me. The worst part being the fact that the boy with the black eye had some friends that could be classified as being a tad too big to be in middle school. I was threatened and terrified. I had made phone calls apologizing to the kid who's eye was a swollen tomato but I am pretty sure it only made things worse.

Now comes the part that for some reason kids think is the wrong thing to do. Once one of the kids tried to steal my bike, I had enough. I went to my dad to talk about it and was damn near in tears. On a stroke of luck we walked into a Starbucks near my school and the Counselor and the Vice-Principal were in there having coffee. I told my dad I needed to talk to them and they happily listened and thank god took care of the problem. The kids who were doing the harassing said, "We were just having fun and joking with him"... Trying to steal someone's bike is not "joking"...

Anywhooosle, screw middle school. It is a cesspool of hormones. On to good ole  high school! Wooot. This is the turning point in my life where things are looking on the up and up. I grow a couple of feet which instantly saves me from being bullied. I lose all of that "baby fat" and now I am the new and improved me. High school is when I started my addiction into making people laugh which is what motivates me to this day. It is when I found that making strangers laugh is much easier than people that you see everyday. (at least for me) So I began to make videos on the internet. It was a boring beginning hopping from site to site looking for new opportunities to make something out of a computer rig and some internet. I have found my place in a loving community that has continued to thrive!

For the final and closing paragraph comes my latest problem. What to do? I am a senior and high school and the thought of graduation and moving on to a bigger and better life is frightening. Not that I don't want to leave (BECAUSE I DO!) but I want to make the right choices and that is were I am so hopelessly lost. I rely on making videos on the internet as a way to keep sane. But due to me either heading off to a university or joining the work force I will have to dampen my efforts on making videos. I have this theory (a common one no doubt), as long as you put 100% effort into something there is no room for failure. Which brings me to whatever I do after high school whether it is continue to make videos for a living or move off to college. I need to put 100% effort into that. Even though it may end up consuming all of my time.

The world is my canvas and I can paint anything that I want. But where do I start when the masterpiece I want to create is more detailed than the Mona Lisa? 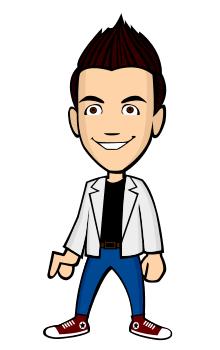 My name is Trevor and I create video game let's plays!

I play a variety of different games that are amazing!

The 90's Era (Cartoon Network) - A Trip Down To The Memory Lane Image Credits: Via:90kids.com(Autho…

Most of us, if not all of us deserve a good partner. Marriage, like it was some decade back was a pe…

People war with each other over silly issues. There are a lot of people in this world including kids…