Haven - Who, What, Where, Wendigo? 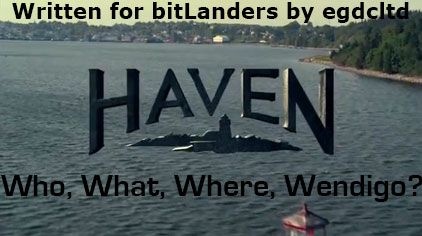 "Who, What, Where, Wendigo?" is episode ten of season two of Haven, a supernatural drama series loosely based on Stephen King's The Colorado Kid. In this episode, the hunt for a serial killer turns into a hunt for a wendigo.

This episode begins with a trucker listening to a radio report about the dismembered body of a missing woman being discovered, and a possible suspect with a rose tattoo. Who he then sees leaving a building, chasing a boy. The trucker follows him with a gun, hears some growling, and then is attacked himself and knocked out. The man with a tattoo is apparently a serial killer, and he may well be Troubled. Parker now doesn't trust anyone but her and Nathan, and says they need to do it themselves. The boy's father, a former Marine, also accompanies them, as does Dwight. Then Vince and Dave join them as well, but Duke refuses Parker's request. So they all go for a pleasant stroll in the woods, following a blood trail. 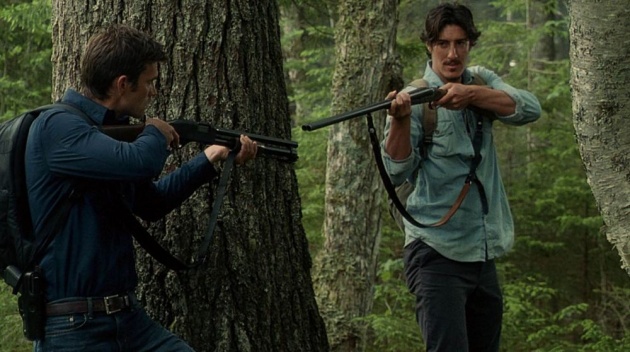 Then the find the serial killer - dead, impaled on a branch and having human bitemarks on him. According to Dave, the woods are inhabited by wendigo. Parker thinks the boy may be troubled, but the father says that's not possible. Then they stumble upon Duke and several others - who are accompanying the Rev.

Duke May Not Know What is Really Going On

In the previous episode, "Lockdown", Duke's wife Evi was shot and killed, and Duke actually seems grateful to Reverend Driscoll for how the latter behaved later. Perhaps he isn't aware that her death is really Driscoll's fault - or that those who shot her were under orders not to shoot Duke himself, because he would be useful. Or perhaps Duke is playing his own game. The Rev's choice for chief of police also died, which means that there isn't currently a chief of police. 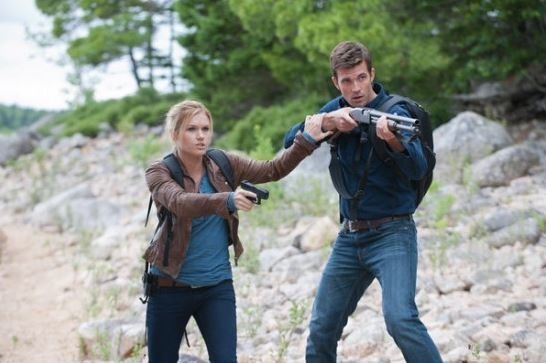 There's more than one thing out there. It's getting dark and the hunters are becoming the hunted. The Rev wants to find the Troubled and kill them.