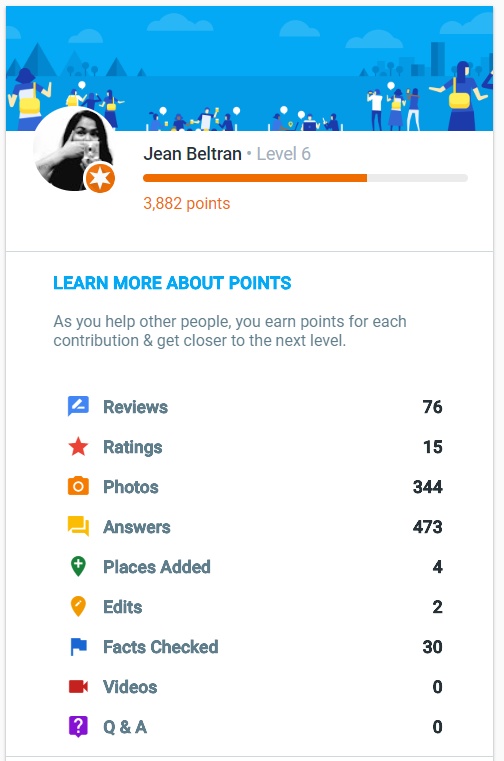 Level 6 at 3,879 points - that's my current Google Maps Local Guide's status level. It's quite amazing how a simple contribution to Google Maps had earned me to this level, thanks to @adgoggleko for introducing me to Local Guides.

Around eight months ago, I shared how I Became a Google Local Guide.

Originally, my goal was just to earn 1TB of online storage which is given to those who gets a certain level, that pushed me to try this and although I don't know what level that would be, after months of contributing, I just didn't force myself to immediately reach that point, I was having fun in fact with the activities I am performing with the said tool.

To those who are not aware of this, let me share with you an overview of how this works.

Who doesn't use Google Maps? I personally use it when looking for some places, restaurants or directions while in Cebu. My husband uses it when finding routes too! And most especially when we are on the go during travel, we use it to show us the right way, well, of course, it isn't perfect, there were multiple times when we somehow got lost instead of finding the right way but that didn't stop us from using the application!

But there's more to Google Maps than just looking for the directions and nearby restaurants. Anyone can also ask, post information on a specific location, establishment or even a tiny store! Reviews and publishing photos come hand in hand too!

Today, let me share with you how we can earn points in Google Maps to increase our Local Guide level. But if you are not yet part of it, you might consider signing up first. Check my blog on how to become one above.

In today's world, I noticed more and more people are becoming web savvy and with that, they also learned to consult the internet for ratings whenever they have an item to buy or a place to visit. Thanks to those who are also eager to share their experiences, we are able to consider if we should pursue this or that or just ditch the plan.

The same thing is the case with adding ratings. You can rate this certain place with stars! It's a five star if you are very satisfied, four stars for just satisfied, three for so-so location, two if you are a little disappointed or you kind of dislike it and one if you don't recommend this location.

Without saying a word and just by tapping on the screen, you get 1 point for the rating! 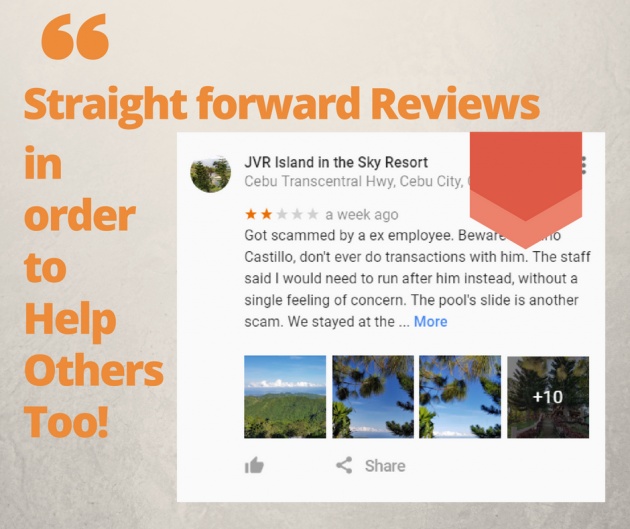 Words say a lot of things and when someone adds reviews, that means they are loving the location or perhaps they are disappointed.

Company owners nowadays are also very particular now with reviews thus, most are already doing their best to provide their consumers and customers with their top service.

However, there are still others who are either not aware of the internet or they just don't care about their businesses that's why they don't provide the best to the clients.

All of these situations can be added by the local guide. I personally had provided 76 reviews, there are still a lot of other places that I had visited which I had not added reviews yet but adding one gives 10 points per review and if the report is more than 200 words, an additional 10 points will be given on top of the first 10 points.

If one is aiming to have more points, then shoot for the reviews! 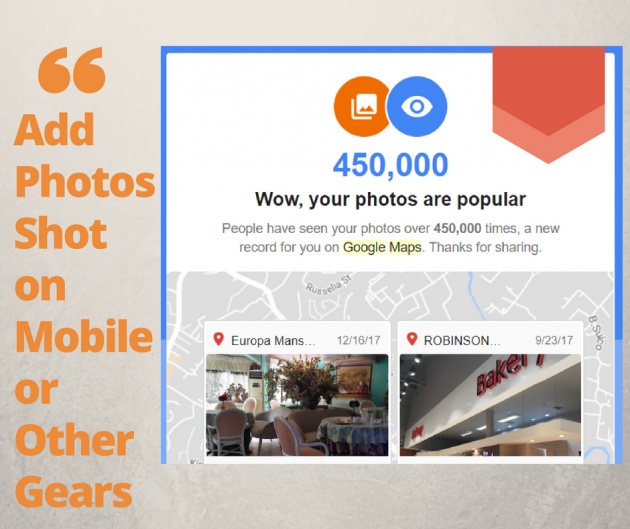 Media file such as photos is considered high value as well in Google Maps. Some people would love to see photos of the location of course because this will give them a preview of how such place looks like.

Thus, when a local guide uploads an image, it will give him 5 points per picture! I personally love adding images directly from my phone, however, there are times when I forget about taking pictures especially when I have my digital camera with me! So there's a tendency for me to delay my review on such place.

I am trying my best to always take mobile photos too because it's much easier to upload the images as Google Maps always will ask about the rating after visiting or while on the area given that the app is given location services in the mobile. 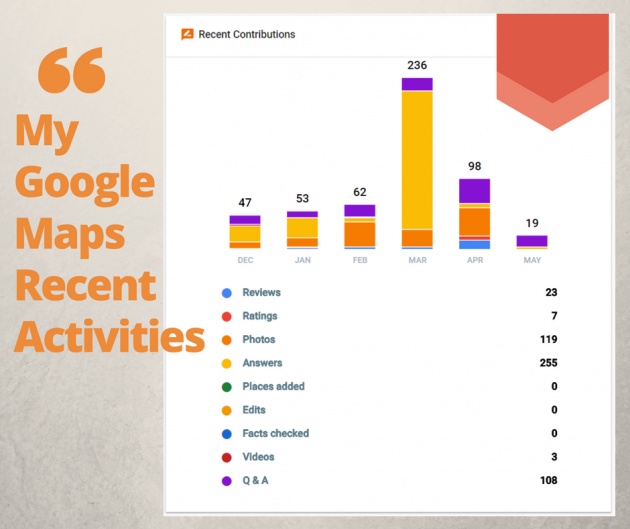 Videos are two points more valuable than images. Be careful though with sharing videos because you might be on data and uploading one will drain your bandwidth.

But, you can also set Maps to only work when on WIFI. So you must set that first and perhaps upload the files once you are in a reliable connection.

For the last six months, I only have posted three videos, I guess I should work more on that aspect.

Ever tried going somewhere and couldn't locate it in Google Maps? Well, you got an opportunity right there! When adding a new place, you get 15 points after it has been verified to be true information!

While it might be hard to find somewhere which is not available on Google Maps, I for one had added 4 places over the past 8 months most of them were from Bohol so I totally believe there will be more! Just move around and you might be surprised! 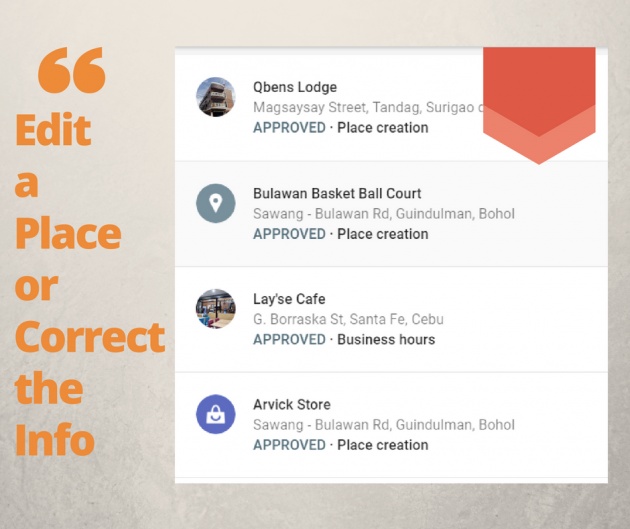 When one adds a new place, some other people will be asked if this information provided is correct. There are five points per edit.

I have only two for the past months. It is hard now to edit a place, note that when your added information is also incorrect, points will be deducted from your current score! So always be careful! 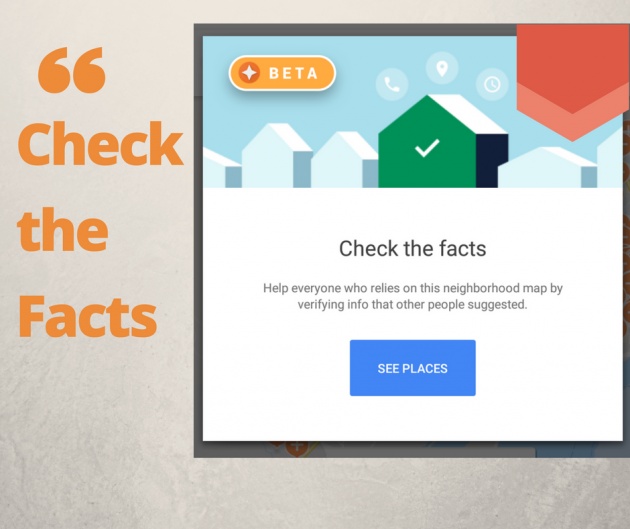 Every once in a while, Google Maps would ask certain details to check if the information given by other guides is true and real. Some of the verification questions I received before were asking if the phone number is correct, the address is it real, and if the name of the establishment is up to date.

One point per facts checked! Google Maps asks random questions too such as the following:

- Can the location be considered romantic, is it chic, etc?
- Does it have a wheelchair accessible parking?
- Does the restaurant accept credit card or is it cash only?
- Do they provide delivery options?

And there are a lot more. It's just answerable with a Yes, No and Not Sure options. This gives one point per answer! 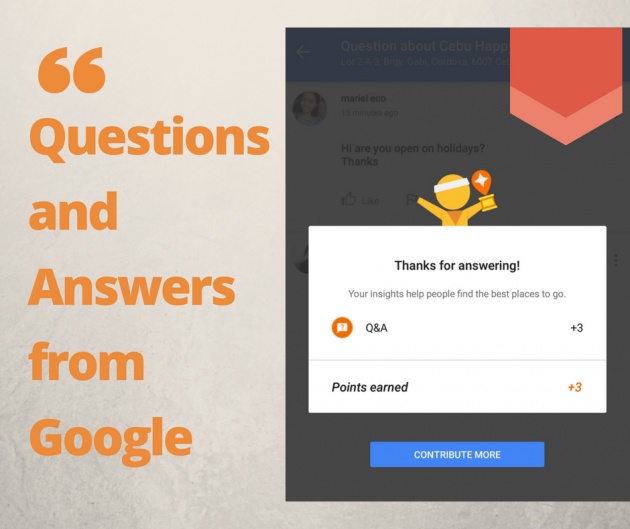 Finally, anyone can ask questions on Google Maps. Whenever you search for a place on Google, there's a section of the search engine which provides you with the name, phone number, address and a lot more details. It also provides an overview if this establishment is open at this hour or not.

In the bottom, one can actually ask questions, anything under the sun. Once the question is published, it will send that to all guide who had visited this spot!

On my end, my phone gives a notification once a question has been raised. Three points will be added per answer!

The guide as well may ask questions at the same page or in Google Maps itself. There's no point when asking a question.

That's it! Google Maps has evolved over the past years and I am enjoying so far with providing them with data. I am happy to see progress on the number of views in the photos I post and the number of questions I have answered. I try my best to provide useful information and give value to the Local Guide community plus, I am aiming to get my points up too, soon I will reach Level 7!