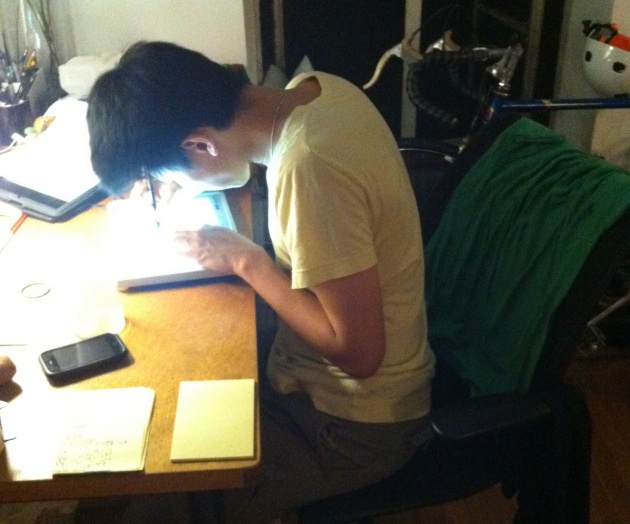 For the film, 15 of some of the biggest names in Canadian indie animation came together to create a collaborative animated film.  An ‘Anijam’ is a collaborative animation with various animators who do individual short animated segments that link together to make one larger film. This week I'm featuring and interview with the hardest working man in animation, Howie Shia!  Just like Lillian Chan who I interviewed in my last blog entry, I met Howie years ago at the Toronto Reel Asian Film Festival where we were able to hang out and talk animation.  I was first introduced to his work when I saw his National Film Board animated film, Flutter. When I saw the film back in 2006, I immediately fell in love with Howie's animation style.  He had this wild style with crazy perspective and frantic movements.  Plus, he is a workhorse...he always has a ton of projects on the go all the time...anything from illustration, series development, filmmaking, commercial production, music collaborations, etc.  Currently, I know he's working with Disney on a new action cartoon that he created.  From the few clips of the new show I've seen on his current demo reel, it looks amazing!

BIO: Saskatoon-born artist Howie Shia is a founding partner in the Toronto-based music/design/film studio PPF House. There he spends much of his time illustrating, animating and scoring independent work as well as commercial projects for the likes of the NFB, UN-Habitat, the YMCA, Nike, Maisonneuve Magazine, the Worst Pop Band Ever, LEO37 and others. A Chalmers Award nominee and recipient of the Vtape Video Art Award, Shia's work has been screened at festivals and galleries around the world, including the Art Gallery of Ontario (Toronto), MIPTV Festival (Cannes), the Lux (London, England), the Glenbow Museum Festival of Moving Objects (Calgary) and the University of Cairo. Howie has been called many things throughout his diverse career, most notably, «Howie.» 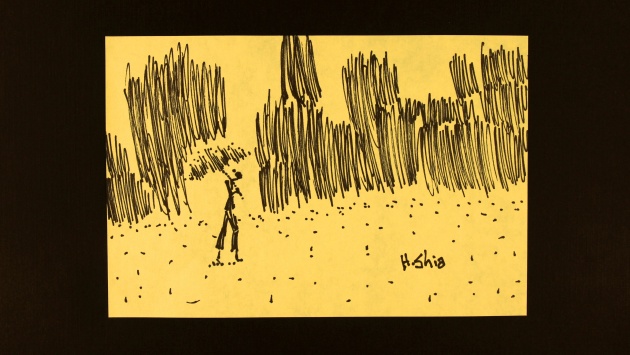 HS:  Curiosity, I suppose.  I'd thought about doing it as a teenager but ended up taking a more general course in art and writing at the University of Toronto.  After school, I started working as an illustrator and video artist and through some friends at the NFB found out about their Hothouse programme that Michael Fukushima was running with Janet Perlman.  The application welcomed non-animators to apply so I figured I'd give it a shot.  I was fortunate enough to get accepted and have been bent over a drawing table ever since.

HS: "Flutter" and "Peggy Baker Four Phrases" sit about equal for me - for different reasons.

HS: For me, it doesn't really matter that it's short so much as that it's focused.  I've seen some pretty flabby 2 minute films and some some amazingly tight 3 hrs features.  My favorite art tends to to destabilize my picture of something that I thought I had previously understood - make the familiar appear alien - and preferably doing so without too much proverbial shouting and hand waving.

HS: All the animators I know have a knack for seeing the world in slow motion.  In a time where everything is getting faster and faster and faster, learning to see and think and, indeed, feel at 24 frames per second is a wonderful way to gain perspective on the differences between perception and reality.

HS: Developing a new short film with the NFB which will hopefully be finished in late 2014, and a TV series for Disney that will hopefully happen... later than that. 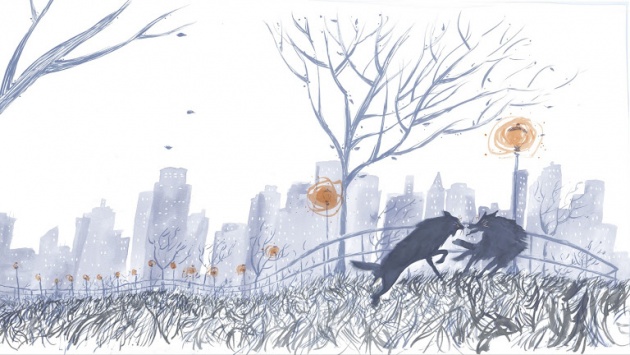 (some of Howie's illustration and CD cover design work - courtesy of www.ppfhouse.com)

"Being the first time in a long time that I'd animated on paper, I wanted to do something that would reference the basics of animation.  I settled on a version of a walk cycle.  I made this piece in an apartment in Brooklyn, with no air conditioning during one of the worst heatwaves in recent history.  Then, on the day I started drawing, the clouds cracked open and it started raining - pouring - likely, old men somewhere were snoring.  And all while, Egypt was wringing its hands over who would be its new president, and the Western world was still weighing the pros and cons of hoodies (aka bunny hugs)."

Below you can watch Howie's animated segment from Yellow Sticky Notes | Canadian Anijam.  Enjoy!  Please subscribe for new blog posts in this series (many other great animators to come) and more clips from the film!