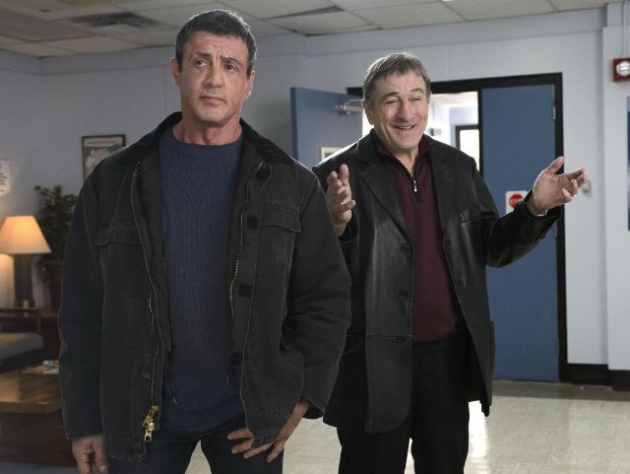 The ROCKY franchise is set to continue in 2014 with the Broadway production ROCKY: THE MUSICAL – fortunately without Sylvester Stallone singing the title role: ‘I’m a bum/hitting pieces of meat/give me a shot/and I’ll taste defeat’ (sorry, should have said spoiler alert – applies to whole piece). What’s more, Stallone has tapped FRUITVALE STATION writer-director Ryan Coogler and actor Michael B. Jordan for the ROCKY spin-off CREED, in which Jordan plays the grandson of Apollo Creed, Carl Weathers’ character, whilst Stallone reprises Rocky as a trainer, shouting ‘adenoid, adenoid’ in the ring for some reason.

Stallone meanwhile is back in the ring in GRUDGE MATCH, a comedy written by Tim Kelleher and Rodney Rothman and directed by Peter Segal (THE NAKED GUN 33 1/3, ANGER MANAGEMENT), as Henry ‘Razor’ Sharp, a boxer who, unlike Stallone’s alter-ego, retired from the ring in the early 1980s to work in a factory in Pittsburgh. He gets talked out of retirement for an offer he should refuse, a rematch against Billy ‘The Kid’ McDonnen (Robert De Niro), that he dodged thirty years ago, albeit for a video game. Their festering dislike results in a scrap in a studio and the prospect of an actual fight, fronted by first-time boxing promoter, Dante Slate Jr (Kevin Hart), the son of the man who took Henry’s winnings.

So how do the Sly and Bob fare, thirty years on from their glory days? Why not let sports commentators Nate Notchco and Tally Rutello talk us through it?

TALLY: Why are you announcing? You’re supposed to a commentator, man.

NATE: And in the Red Corner, triple franchise-lock, Rocky-Rambo-Barney – why Barney? Also from New York City, New York, but studied in Pittsburgh and was an instructor at the American College in Geneva, Switzerland – can you believe that? Writer of an Academy Award-winning picture, he is the EXPENDABLE Sylvester Stallone.

NATE: In an acting fight, unquestionably Bob is going to win – but in the ring?

TALLY: The guy who takes banned substances, come on.

NATE: OK. So we have the opening montage in which we see Sly and Bob – Henry and Billy - as younger men. Sometimes an actor is playing them, sometimes we see sequences of Sly and Bob actually training, preparing for ROCKY 3 (I think) and RAGING BULL.

TALLY: Nate, you’re not supposed to talk in a movie theatre.

NATE: Nonsense, no one will notice, they’re all on their i-phones.

TALLY: But I at least came to watch the movie.

TALLY: I amazed that he still working after D-TOX; the press notes don’t even mention that. As for the remake of GET CARTER...

TALLY: I can’t believe TREME star Anthony Anderson would turn up for a one-scene cameo as a nurse.

NATE: I can’t believe Alan Arkin would sign up for this. So now we have Kevin Hart turn up as Dante Slate, Jr at Henry’s house. He complains about Henry buying two cans of tuna and bunches of bananas.

TALLY: You can tell a lot about a man by what he puts inside him. And where he puts it.

NATE: Are you suggesting?

TALLY: All he has to do is licence his likeness, he doesn’t have to box.

TALLY: And those customs charges from trying to bring banned supplements into Australia.

NATE: That was years ago, move on.

NATE: So Henry agrees to be subjected to motion capture.

TALLY: I’d really like to see him do that scene from HOLY MOTORS – that was weird.

NATE: This is a PG-13 rated movie. Sly doesn’t have a thing [gestures] like Denis Levant. Who should turn up but Billy the Kid?

NATE: Anyway the two guys go at it in green unitards. Equipment is broken. But one guy records it on his phone and uploads to YouTube. It goes viral.

TALLY: Viral? That’s when you talk with a blocked nose.

NATE: So there’s a press conference. Hardly anyone shows up but Billy goads Henry. It is comedy goad – or not.

TALLY: Is this the reason Steven Soderbergh gave up movie making?

NATE: I have no idea why you would bring that up. Who should turn to the press conference but Kim Basinger.

TALLY: I wanted to turn up for the Press Conference for GRUDGE MATCH in London, but the publicist didn’t tell me where it was, unfortunately.

NATE: Her younger self is played in the movie by Ireland Basinger Baldwin.

TALLY: IBB? Isn’t that what they give women who can’t conceive?

NATE: Anyway, thanks for asking, Kim looks great for a sixty-year old and she’s going to be in Paul Haggis’ new movie, THE THIRD PERSON.

NATE: You’re thinking of the movie, HER.

TALLY: I thought you are not supposed to talk about HER. You signed an embargo form.

NATE: We need to talk about Kevin. Anyway, Basinger’s character Sally tries to talk Henry out of it.

TALLY: Why would she do that?

NATE: Henry would murder Billy in the ring, killing the father of her child.

TALLY: Star of BJ AND THE BEAR?

NATE: No, Billy has a son, BJ, short for Bradley James, and played by Jon Bernthal.

TALLY: BJ is short for something else.

NATE: In the movie it’s Butterscotch Jellybeans. It’s PG-13, remember. And by the way, Billy is also a grandfather.

TALLY: That’s a heck of a lot to take in – Butterscotch Jellybeans.

TALLY: Sally is not going to persuade Henry. He’s never going to forgive her for 9 ½ WEEKS, that thing with the butter.

NATE: So BJ turns up at Billy’s gym and offers him some advice that makes a difference to Billy’s jab.

TALLY: He persuades Billy to get tetanus. Must be all those scenes with a glove puppet from AVENUE Q. OK, there’s only one – the film is rated PG-13.

NATE: Billy admits he wouldn’t have made a great father. He was always chasing skirt.

NATE: BJ walks out on him. If his real pop had been around he would have had a better name.

TALLY: What could possibly go wrong?

NATE: Billy could mind his grandson, take him into a bar and crash a car, well nearly. He certainly gets arrested. Henry could reveal that he can only see through one eye.

TALLY: Why does the other keep moving?

TALLY: So they are going to call off the fight.

NATE: Well, before all that happens, Billy and Henry are on promotional duties. Earlier, Billy who advertised ‘anti-Jock Itch’ powder said he ‘never had Jock Itch’ – he’s ‘a good actor’. Well, he’s not a good actor reading advertising guff for a casino.

TALLY: Is that why CASINO didn’t do so well and De Niro didn’t work with Scorsese again?

NATE: No, De Niro likes to play safe. You ever see him in a movie like LINCOLN or THERE WILL BE BLOOD? He does genre stuff. He doesn’t take chances.

TALLY: Maybe that’s why he never got Jock Itch – he didn’t want to be in BRAVEHEART.

NATE: There’s a scene where they disrespect mixed martial arts and punch a guy out, though to be honest Henry packs the real punch.

NATE: Anyway, they get to play a bigger venue.

NATE: So now they got to take it seriously.

TALLY: Does De Niro recite poetry in his changing room, before he says ‘that’s entertainment’ – cut to him as a younger man.

NATE: You know your RAGING BULL. Did I say Henry can now pick up a tyre?

TALLY: The one around his midriff?

NATE: So we get to the fight. Sally and Henry have got back together. Billy says ‘call me grandpa’. Can you call it?

TALLY: Dante pitching a comeback fight to Mike Tyson and Evander Holyfield? The prospect of HANGOVER PART IV? I’m not sure I’d want to.