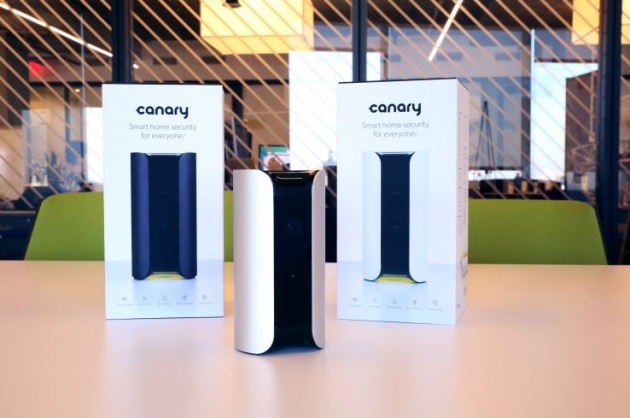 Canary, the all-in-one smart home monitoring system that launched on Indiegogo in summer of 2013, is today available in retail locations for the first time.

This is a relatively big deal considering just how few crowd-funded hardware products ever make it out of the lab and into a retail location. It took Canary, complete with Indiegogo and venture funding, more than 18 months to get in front of in-store customers. But today is the day.

Retail distribution partners include Amazon, Best Buy, Home Depot and Verizon Wireless, and the company said in a release today that it has plans to expand internationally later this year.

Canary is a home monitoring system that’s about the size of a 24-ounce beer can, but packed with all kinds of useful sensors, microphones, cameras, etc. to keep an eye on the home. The Canary pairs with your smartphone in the form of an app and gives users a look at all the motion in their apartment (the motion detector activates the camera) or a live view of what’s going on at that exact minute.

Over time, the Canary is supposed to learn about different activities (like sunlight coming through a window, a fan, a pet, or a roommate) so that it can tell the difference between a friendly babysitter and a malicious intruder.

Canary says that of all the backers on Indiegogo, who are now participating as beta testers of the hardware, the average user checks into the app about four times a day and watches around 50 minutes of live video in the first month of owning the device.

The company shattered its $100K Indiegogo goal and went on to raise $10 million in Series A led by Khosla Ventures.

Canary is available today in retail for $249 at any one of the above retail partners or atthe Canary website.

Put an end to this horror story...

What is Crowdfunding? Crowdfundingis the process of collecting individual donations and pledges of …