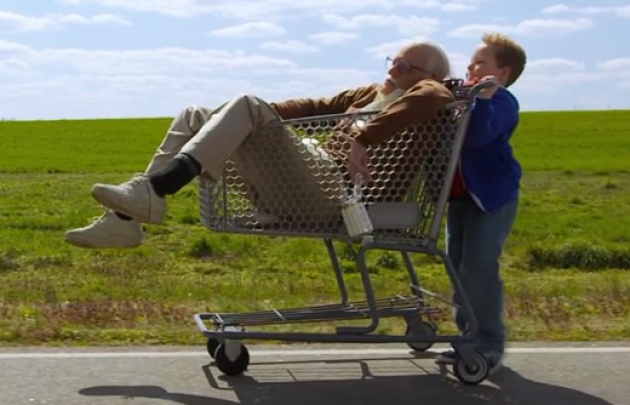 After being the box-office champion, "Gravity" fell a notch but still created an impressive box-office performance bringing its domestic total close to $200 million.

"Bad Grandpa" might have been the box-office champ this weekend, but it was well below than the $50.4 million debut of "Jackass: 3D" in 2010.  The fourth installment even has a plot with Johnny Knoxville playing the title role of the bad grandpa aka Irving Zisman to his 8-year-old grandkid, Billy played by Jackson Nicoll (check out my review below).

Another Oscar hopeful, but failed miserably (both critically and commercially), was Ridley Scott's "The Counselor."  With an admirable director, a script from one of America's greatest living writers (Cormac McCarthy), and a talented cast featuring Brad Pitt, Cameron  Diaz, Javier Bardem, and Michael Fassbender, how can "The Counselor" go wrong, right?  Well, this one's lifeless and its box-office take mirrored that.  "The Counselor" debuted at No. 4 with just $8 million.  Dead on arrival indeed!

The sequel "Cloudy with a Chance of Meatballs 2" round out the Top 5 with $6.1 million.

The super good-news of the weekend belonged to "12 Years a Slave" from director Steve McQueen.  The Oscar bait pulled in $2.15 million in just 123 theaters!  Take that "The Fifth Estate!"

Here's the estimated Top 10 Box-Office Films for the weekend of Oct. 25th:

Here's my reviews of "All is Lost" and "Jackass Presents: Bad Grandpa."