Jason Collins' No. 98 Nets jersey the top-seller on NBA.com 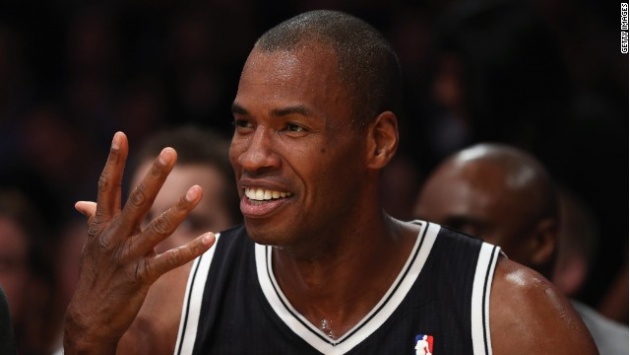 Last week, Jason Collins wasn't even on an NBA team. In two weeks, he might not be on one.

But for now, Collins -- the first openly gay, active player in the United States' four big sports leagues -- is, by jersey sales, the NBA's most popular player.

NBA Senior Vice President Vicky Picca said Tuesday that Collins' No. 98 Brooklyn Nets uniform is the top-seller on NBA.com, besting the likes of LeBron James, Kevin Durant and Blake Griffin. The interest is coming from the fans Collins has earned since announcing last year, when he was still unemployed, that he was gay.

"Jason Collins' return to the league represents a historic moment, and fans continue to show their support by (buying) Jason's jersey," said Picca.

Not bad for a player who, just last week, inked a 10-day contract with the Nets. And the Stanford graduate hardly dominated in his lone game back on the court, going scoreless while compiling two rebounds and five personal fouls in a win over the Los Angeles Lakers.

In fact, Collins had never been a headline player. A journeyman with stops with New Jersey, Memphis, Minnesota, Atlanta, Boston and Washington, he's known more for his defensive prowess and rebounding than his offensive output, having averaged 3.6 points per game over his 12-year career.

The warm reception he received during and after that game from his teammates, competitors like Kobe Bryant and league officials reflects more on Collins' reputation as a player and person around the league, as well as his historic announcement.

"I know everyone in the NBA family is excited for him and proud that our league fosters an inclusive and respectful environment," said NBA Commissioner Adam Silver after Collins' signing last Sunday.

Whether Collins stays around remains to be seen. At age 35, he's not bringing fresh legs to Brooklyn. And the team has no obligation to keep him on the roster.

Still, whether or not he's a go-to player, Collins has very much become a symbol for the gay rights movement since disclosing his sexuality in an April column in Sports Illustrated magazine.

"I didn't set out to be the first openly gay athlete playing in a major American team sport. But since I am, I'm happy to start the conversation," he wrote.

"I wish I wasn't the kid in the classroom raising his hand and saying, 'I'm different.' If I had my way, someone else would have already done this. Nobody has, which is why I'm raising my hand."

There's no escaping the symbolism in his jersey number: He chose 98 in honor of Matthew Shepard, the gay University of Wyoming student beaten to death in 1998.

The news that the Nets jersey was selling so well (despite the fact that Collins hasn't even worn it yet, having at first donned a No. 46 for the Lakers game) struck a chord online.

Some on Twitter praised the development, like one who wrote, "He's a piece of history, and this is really significant for a lot of people."

Many others, though, were less enthusiastic -- including some who used gay slurs and suggested Collins was profiting because he is gay. (In fact, NBA players don't get more or less money based on how many of their jerseys are sold.) Some questioned why Collins was being held out as an icon while, in their view, athletes who publicly profess their Christianity are criticized.

A few people questioned the jersey sales not because of Collins' sexuality, but because of what they considered his sub-par play.

"Jason Collins' jersey was actually a top-seller?" tweeted one. "Wow...I mean I'm glad he came out and all but #CmonMan."