Most fans show their love for their favorite band by purchasing their songs, attending their live shows, and even snagging some of their limited merchandise. These are the most essential ways of supporting them. However, other fans even go beyond that by giving them fan gifts.

Fan gifts can either be given personally to the artist, on a drop box provided during concerts (if there is no meet-and-greet), or sent to their talent agency’s office address provided by their management. Of course, the best way to give your gift is by handing it personally, which also makes sure that the artist really receives it. What makes it more special is that you’ll get to see how the artist would react to your special gift. That's all us fans are looking forward to, right? To see that smile and hear their thanks only just for you. That even for a short moment, your favorite artist had given attention to only you. (One box ticked off from the bucket list! Hurray!) To cut my intro short, I recently discovered and joined a global fan group for a band I love called coldrain which was gathering gifts and fan arts for a fan project to be given to the band. 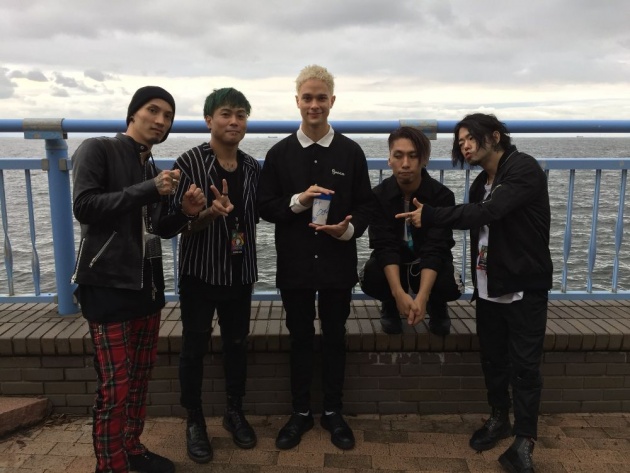 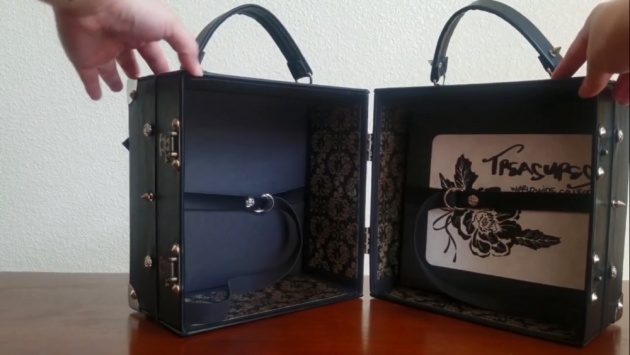 (image source: ANOTHER DECADE IN THE RAIN via Youtube; screenshot by Katsanslimites)

A global fan group for the band coldrain named “ANOTHER DECADE IN THE RAIN” had this project of collecting gifts and artworks across the world to compile it and give it to the band members all at once, kept on a special box. (“A Decade in The Rain” is a title of one of coldrain’s songs while "Another Decade in The Rain" is one of their slogans right now for their tour. The phrases refer to their 10 year journey as a band and continuing to another decade.) 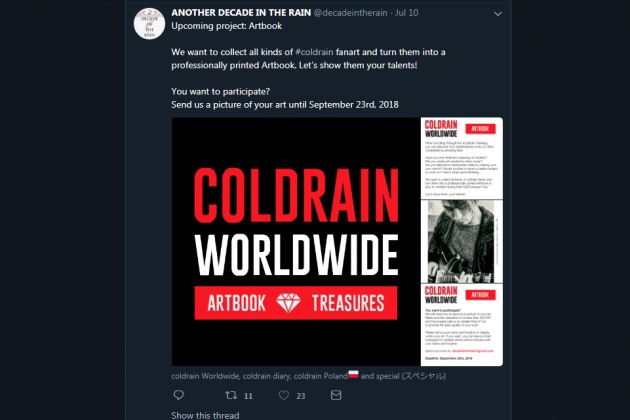 There are 2 categories fans could send entries to: Suitcase of Treasures and Artbook. The Suitcase of Treasures are gifts like postcards, chocolates, candies, letters, etc. Meanwhile the Artbook are photos for tattoos and fan arts which can either be traditional or digital. Handmade items are also categorized in the Artbook. The photos for the Artbook category can be sent electronically and will be printed by the group while your gifts for the Treasures must be sent to their address. Recently, they have also accepted letters to be sent via email and they would do the printing to make it more convenient for fans. Since I have no tattoos and sending gifts seems too much for me, I decided to go for the Artbook, digital art.

Before I proceed to my fan art process, let me give you a brief introduction about who coldrain is. 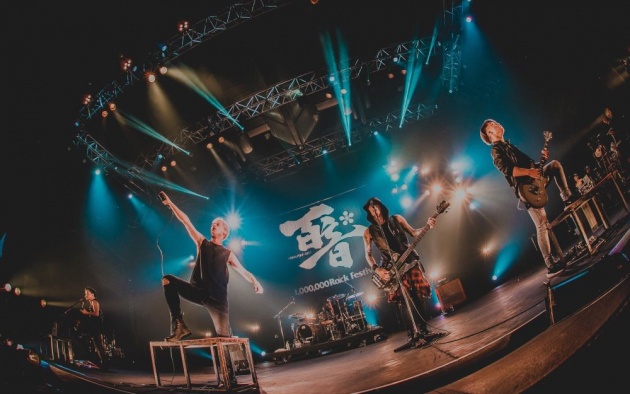 “coldrain” is a Japanese band which began in 2007. Yes, their band name begins with a small letter “c”. The band has five members and none of them had left the group since they began. The vocalist, Masato David Hayakawa, is a Japanese American which makes him proficient in speaking both the Japanese and English language.

The band’s music is on the metal genre and mostly has English lyrics. I am not a music expert so I can’t tell which type of metal music is their style. (Maybe those who are more knowledgeable on music and metal genre can help me distinguish by watching the video I embedded on this blog.)

In terms of their popularity, I would say they are already popular but still not on the mainstream level. I believe it’s only a matter of time before they get more recognition because I can tell this band has a very strong will. I know these musicians won't easily back down. And as the lyrics on their song “A Decade in the Rain” says,

“If it still feels like we're going up.
Then I can't see why we'd ever stop.
You will never stop us from believing and conceding.
Everything we hoped for isn’t all gone.
It’s not over.
We’ll keep on singing.”

I was totally in a dilemma while deciding which fan art to make. I wanted to make a semi-realistic art for each member but doing five fan arts will be very much time consuming. I only had a few days before the deadline for the Artbook so I tried to lessen it to two, plus a cute chibi art with all the members. However, I didn’t feel good last week and wasn’t really in the mood to draw. Due to time constraint and loss of energy to do things lately, I ended up only making one. I told myself that submitting at least just one is already enough, and better than submitting none. I didn’t also want to take lots of pages of the Artbook because I don’t want to appear like a show off or anything like that.

Since I am only left with one fan art to make, I decided to draw an image of the frontman, Masato. It was the easiest option because Masato has some photos on Instagram with the angle I am looking for. I am currently into drawing side view headshots and planning to make a compilation of it after I finish drawing everyone on my list. Of course, Masato was on my list, so making this fan art is a win-win situation for me. I got to finish one on my list and also submit it to fan art project to be given to the band. 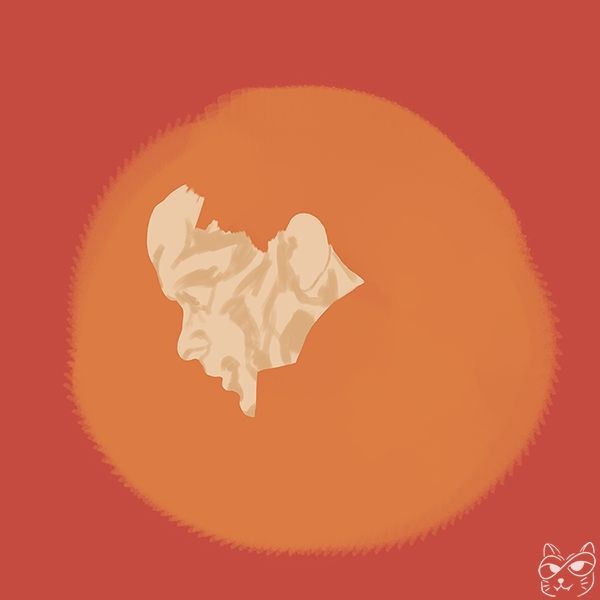 Using Clip Studio Paint Pro and Wacom Intuos Comic, I first chose the color for the background. My art actually has two backgrounds. (I don’t know how to properly call them so let’s just call it the primary and secondary background.) The primary is the entire area while the secondary is the circle. Choosing the color was challenging because it must complement Masato’s hair and outfit color. After some trial and error, I thought of making use of the colors for autumn season since I assume the fan project will be given on their tour at Europe to as supporting act to Crown The Empire happening until October. Masato has a blond hair so that already represents color yellow. I then went for a red for the primary background and orange for the secondary background. 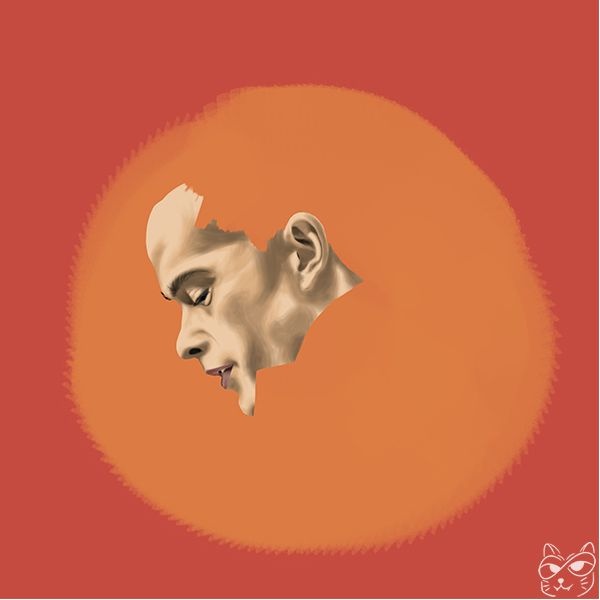 After deciding on the background colors, I began drawing the image. I always start drawing the face, followed by the hair, then the dress as the last. The colors I use usually consists of 4 to 6 shades to come up with that semi-realistic look. Honestly, I hated doing the shadows of the face and the first steps of drawing the hair. But I always like doing the highlights and small details of the hair and dress. Of course, the most important and final touch to my art is my signature and name. This is to make sure that no matter where your art goes, people will know that it is you who own the art. 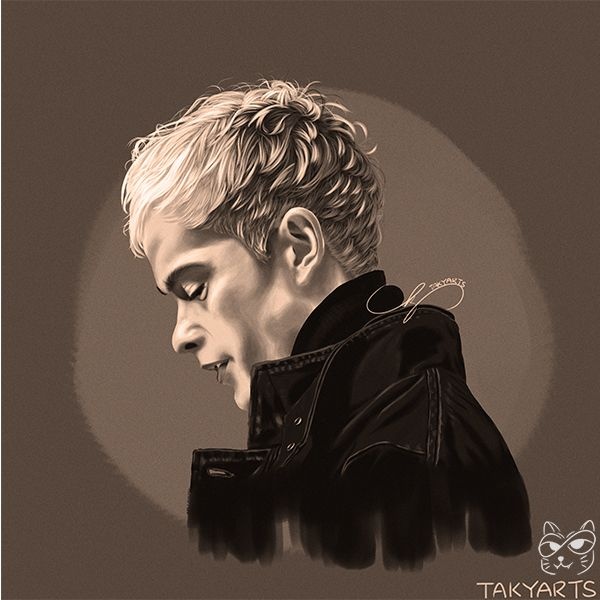 (image source: Katsanslimites)
Takyarts is my art pen name. I changed the color of my art for this blog but the piece I submitted to the group was the colored version, of course. I just don't feel uploading the colored version anywhere until the Artbook was given to coldrain.

My art is actually already done but most of the time, I still add one adjustment to my drawing. Through Adobe Photoshop, I add some noise to the image. The slight grain effect gives the image a pencil-like drawing effect in my opinion which I really love. For this case, I only added a light noise since I don’t know how huge they would print the image. If I added a heavy noise then it might not appear good when the image is enlarged. 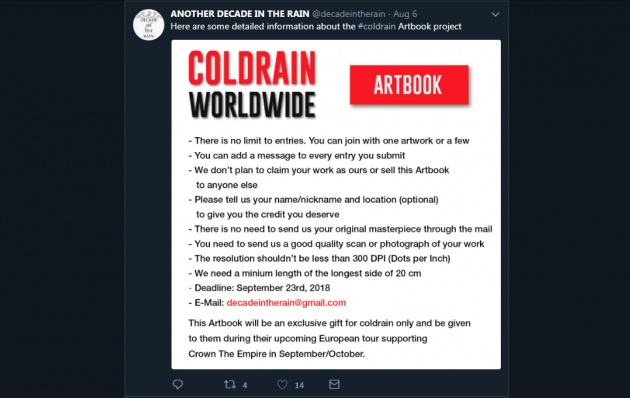 I made sure to finish my drawing first before sending a message to the fan group. Luckily, the dimensions and resolution of my art fit their minimum requirement. I no longer have to change any of my settings. (Whew!) Aside from that, I also included my nickname, location, and a short message. I sent my entry or art to the email address they provided and I was surprised that they were able to respond to my email in just a few minutes.

The group’s administrators were nice and I also had a few chats with one of the admins. She was kind, very appreciative of the fan arts submitted to them, and a very talented one when it comes to art. She showed me one of her traditional coldrain fanart and I was astonished. Actually, she also showed another art by her co-admin and it was beautiful. It looks so perfect that I suddenly want to unsend and take my art back. (As if I can do that! Haha!) There was an embarrassing thing I did too. I forgot to change the filename of my file and sent it with the "oor" (One Ok Rock) filename. The reason I had that filename is because I drew the Masato fan art on the canvas where I was doing my One Ok Rock fan arts. (Gosh, I am so careless!) 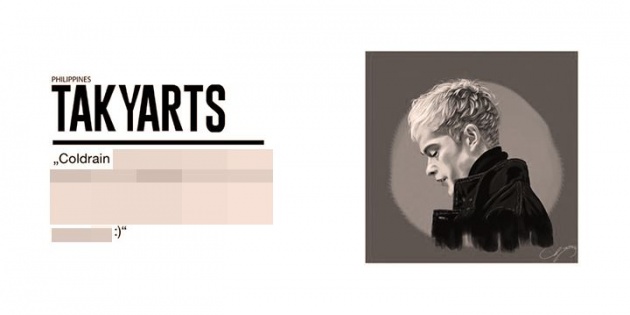 The next day, she sent me the sample layout of my page where my art and information was included. The deadline for submitting entries for the Artbook was already over but the Suitcase of Treasures is still on going until October 2nd.

A PROJECT TO TREASURE

Joining fan projects is so much fun. I get to practice my love for art, show my extra support for the band, and talk with other fans. Another reason I joined this project is because it’s free! All we have to do is to submit entries to fill the pages. I think having fan projects such as this is a very beautiful thing to let the artists know that they are loved and supported by many all over the world. I can’t wait for the fan group’s update of finally giving the gifts to coldrain and I wish there will be photos and videos of it too! I am happy that I have known and became a part of this project.

(video source: ANOTHER DECADE IN THE RAIN via Youtube)
The suitcase where the fan project will be stored.

Do you also participate in fan projects?