Are you into Multiplayer Online Battle Arena games (MOBA)? Chances are you have played, or at least heard, of this very popular mobile game called Mobile Legends. I, too, have been playing this game for almost a year now, with few short breaks in between, and I’d say this is really addicting.

Mobile Legends has gained much popularity from across different ages in several countries including Philippines, India and Malaysia. 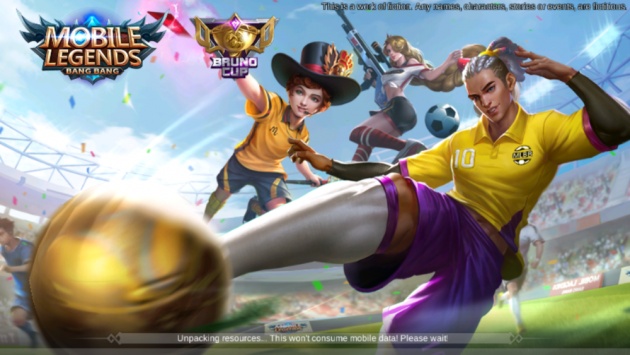 According to Wikipedia, Mobile Legends: Bang Bang is a multiplayer online battle arena (MOBA) game designed for mobile phones (but also can be played on the PC with an Android/iOS emulator). The two opposing teams fight to reach and destroy the enemy's base while defending their own base for control of a path, the three "lanes" known as "top", "middle" and "bottom", which connects the bases.

Obviously, the team which gets to destroy the other’s base wins the battle.

Now, let’s dig deeper as to how this game is played. 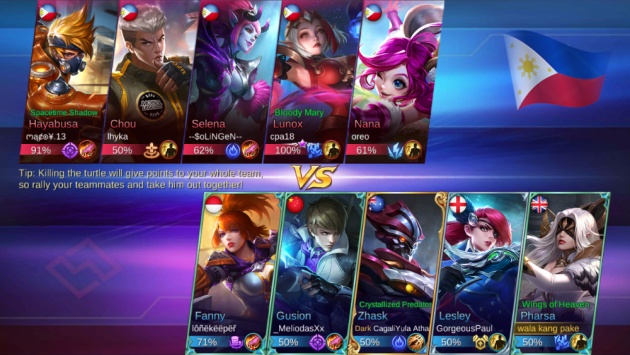 Photo Credits: My Screenshot of matching interface via mobile app

There are different modes of the game: Classic, Rank, Brawl, VS AI, and Custom. On occasional events, they make two other modes available, Mayhem and Survival, where players can earn certain rewards when they participate. Every player can choose whichever mode to enter depending on his/her preference.

When a player enters any mode, he/she is placed in one of the two teams automatically by the system. So, how these modes differ from one another? 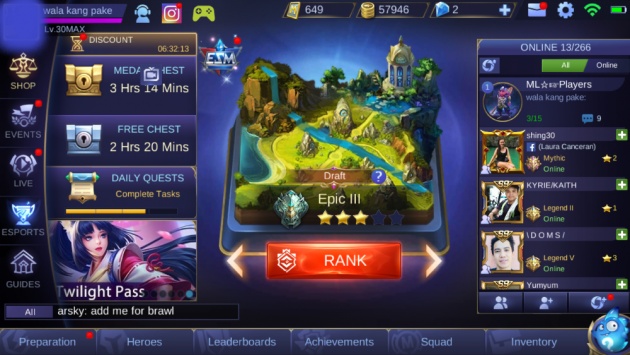 Photo Credits: My Screenshot of game interface via mobile app 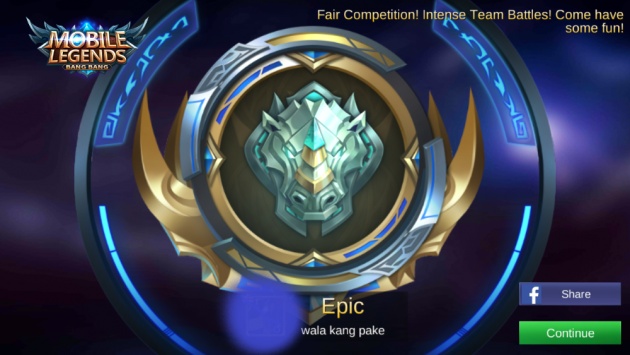 Photo Credits: My Screenshot of EPIC logo via mobile app 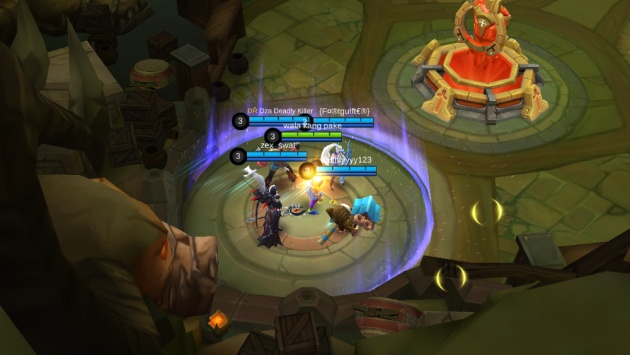 One of the things I enjoy about Mobile Legends Bang Bang is the backstory for all of its heroes. I love how they creatively crafted these stories and how interconnected each one of them. I would probably save that for future blog, but right now let me introduce you to the categories of heroes. Note: I will describe each category as to how I conceive them.

This type of hero is built to be the most durable one. They are expected to be in the front and cover the hitter and damager during clash. Tanks can wear either be physical or tank emblem sets, but I personally choose tank set for durability. As to build, I focus more on armors to increase durability, boots for mobility and speed, and any equipment which can enhance mana regeneration. 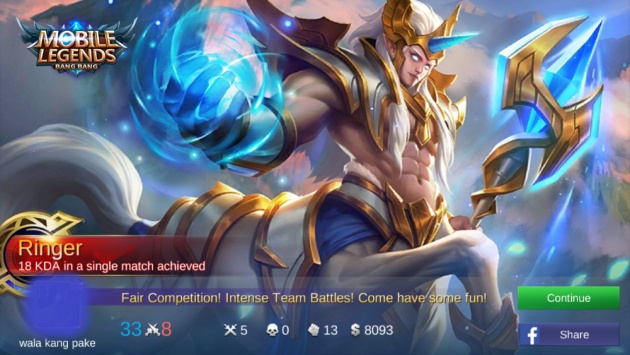 Photo Credits: My Screenshot of HYLOS via mobile app

This type of hero is durable next to tank (although still depending on how the hero is built). They are expected to come in front next to tankers due to their durability and being short-range. Unlike tank heroes, fighters (or chargers) are slightly heavy damagers. I personally do not use fighters that much, unless very much needed in a game where no charger is picked yet by other teammates. Fighters can wear physical or fighter emblem sets, but sometimes if I want my hero to be durable, and in any case no tank for the group, I choose tank emblem.

This type of hero is particularly fast in speed. Compared to tanks and fighters, assassins are one of the least durable heroes. Add that further to their short-range skill sets. Assassins are one of the hardest heroes to use. However, if they get their items full with minimal to no deaths, they become really durable. I personally use three different emblem sets according to the hero since assassins can also be mage type. For sole assassins, I use either physical or assassin emblems. For assassin-mage types, I prefer to use magical emblem set. 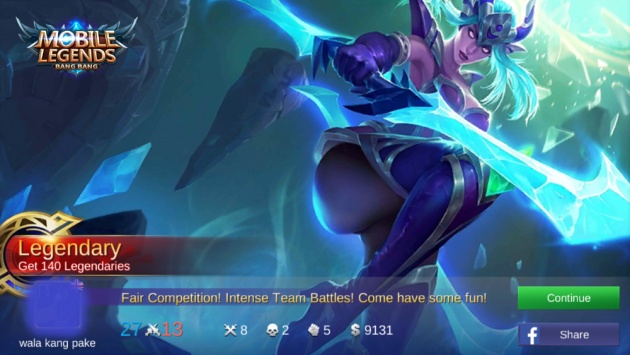 Photo Credits: My Screenshot of KARINA via mobile app

This type of hero is one of the two heaviest damagers. Mage heroes are known to inflict high magical damage to opponents. They are long-range heroes which give them advantage especially during clash, but they are not durable just like assassins. In fact, depending on the hero build, they even tend to be less durable than assassins. I personally use mage emblem set only for mage heroes, although magical emblem set will also do. 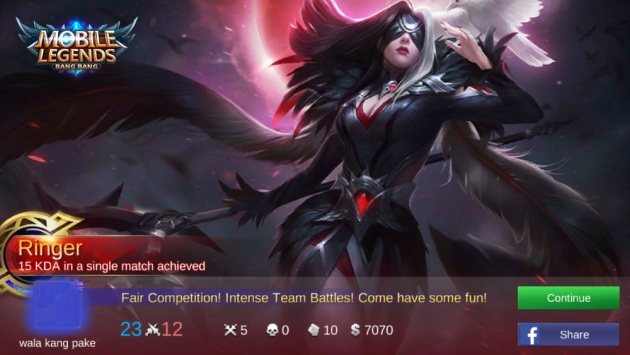 Photo Credits: My Screenshot of PHARSA via mobile app

This type of hero is another heavy damager. Marksmen are known to be hitters, and inflict high physical damage to opponents. They are also long-range like Mage. Their speed is also fine. I believe marksman type of heroes are the easiest heroes to use and master, that is why a lot of players pick these heroes in a match even though one marksman is enough to run a team. I personally do not like picking marksman due to this fact. However, there were few times in my experience I was put in a situation that I need to pick one to adjust to the team’s need. And so I decided to explore on this hero type.

I personally prefer to use marksman emblem set for better hero performance, but other players use physical, even assassin and fighter emblems. Yes, because there are also marksmen heroes which are assassin type like Lesley, and fighter type like Roger. 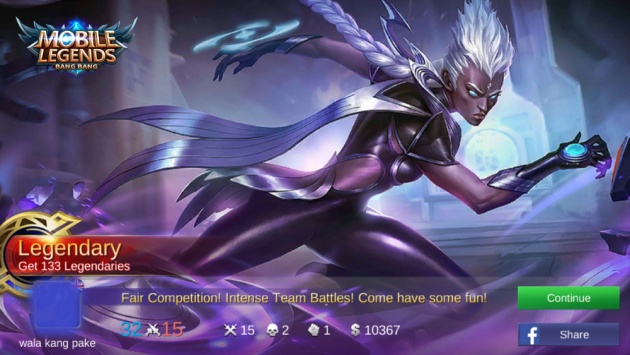 Photo Credits: My Screenshot of KARRIE via mobile app

This type of hero is built to basically support the team. They are use for team buffs, or crowd control during clash. They are pretty much non-damagers, but depending on heroes, they tend to inflict magical damage, too. There are also durable supports which are tank type like Minotaur, Lolita and Kaja. One of its most useful advantages is its speed. They are one of the fastest hero types. They also have the skill to regenerate health for themselves and for their teammates. 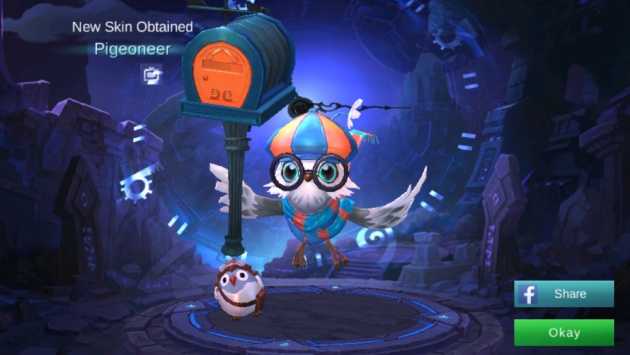 Photo Credits: My Screenshot of DIGGIE with Pigeoneer Skin via mobile app

Thank you for taking time to read this blog post. This is just an introduction. Please expect in my next an elaborated post about my top hero picks. I have a few picks as you can see, but I will try to make my draft not to lengthy. Anyway, let’s save that for the future and focus to this introductory post first.

Do you also play Mobile Legends Bang Bang! If you do, let me know your experience and feedback on the game below. Thank you!

When it comes to designing home, Home Design Makeover is an app that gives us the idea of designing …