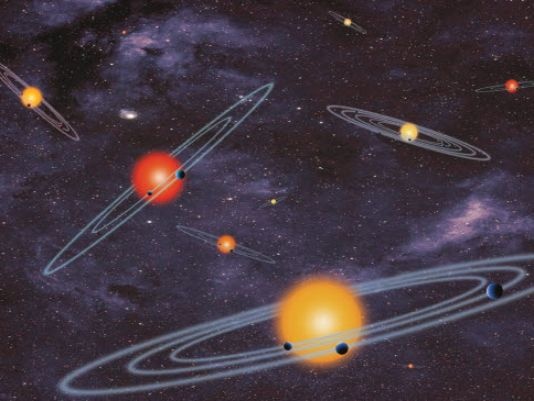 NASA released this artist's conception of planets that pass in front of the light from the star they orbit. NASA said it had confirmed 715 planets outside our own solar system.(Photo: NASA)

NASA's Kepler telescope identifies hundreds of new planets orbiting stars other than our own.

Wednesday, scientists confirmed discovery of a whopping 715 new planets orbiting stars other than our own sun, nearly doubling the number of such planets on the books. Researchers have trumpeted the discovery of large batches of unconfirmed candidate planets outside the solar system but never before have so many genuine, verified "exoplanets," as they're known, been reported at once.

"What we've been able to do … is strike the mother lode, get a veritable exoplanet bonanza," planetary scientist Jack Lissauer of the NASA Ames Research Center said at a news briefing.

Four of the new planets are in the habitable zone, the narrow band around a star where the temperature on a planet's surface is likely to be warm enough for liquid water. All four are about twice as big across as the Earth. Until now, most of the verified planets outside our solar system were sized more like strapping Jupiter, which is 87,000 miles across, than like shrimpy Earth, which is not quite 8,000.

The new group of planets, all found using data from NASA's Kepler spacecraft, is notable not just for its size but for what it tells us about the other planets beyond our own stellar neighborhood. Most of the new planets, not just those in the habitable zone, are small. Their arrangement seems a little familiar: multiple planets traveling around one star on a flat, circular path.

"That reminds me of something, and that's home," Kepler scientist Jason Rowe of the SETI Institute said at the briefing. "It's interesting to look at the Kepler data set and see all these scaled-down versions of our own solar system."

Researchers were able to announce a huge pack of new planets thanks to better methods for verifying planet candidates. Kepler finds possible planets by looking for stars that dim repeatedly, as if a planet was passing over the star's brilliant face and blocking some of the starlight. Kepler can be fooled by objects that aren't planets, such as pairs of stars that orbit each other and therefore dim periodically.

Usually it takes dozens of observations by some of the world's biggest telescopes to confirm a candidate planet, but a new statistical method allows for quicker, more efficient verification. Studies describing the new method and the new planet tally will be published in upcoming issues of The Astrophysical Journal.