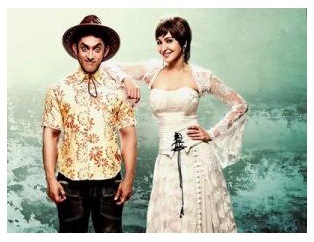 The event took place in a theatre ahead of the Jan 22 deadline to draft the country's new constitution, it was reported Sunday.

The event was kept low key. The reports said that before heading to view "PK", the three leaders had a breakfast meeting. Gautam bought tickets for the Bollywood movie.

Earlier, former prime minister and Maoist ideologue Baburam Bhattarai also watched the film, one of the biggest hits from Bollywood.

The New Delhi-educated Bhattarai then said: "'PK' is a successful movie in terms of striking at social evils like superstition, hypocrisy and exploitation.

"It promotes social justice. It comes with a lot of message," he said.

The bonding over "PK" is being seen here as significant as the CPN-Maoist led by Prachanda and the CPN-UML have different stands on state restructuring.