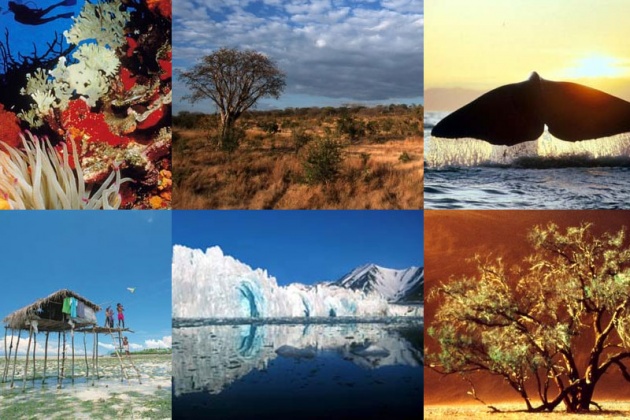 “Yet, despite its importance, marine biodiversity… has not fared well at human hands. Oceans cover almost three-quarters of the surface area of the globe. They are home to the largest animal known to have lived on the planet – the blue whale – as well as billions upon billions of the tiniest of microorganisms. From sandy shores to the darkest depths of the sea, oceans and coasts support a rich tapestry of life on which human communities rely,” offered UN Secretary General Ban Ki-moon to mark the occasion.

UNSG Ban noted the impact of commercial over-exploitation of the world’s fish stocks, with more than half of global fisheries exhausted and a further third depleted, and between 30 and 35 per cent of critical marine environments – such as seagrasses, mangroves and coral reefs – estimated to have been destroyed. As well, plastic debris continues to kill marine life, and pollution from land is creating areas of coastal waters that are almost devoid of oxygen. “Added to all of this, increased burning of fossil fuels is affecting the global climate, making the sea surface warmer, causing sea level to rise and increasing ocean acidity, with consequences we are only beginning to comprehend.”

According to the Secretariat of the Convention on Biological Diversity (CBD), the survival of marine and coastal ecosystems and biodiversity is essential to the nutritional, spiritual, societal and religious well-being of many communities, and not just those in coastal areas. Amongst its findings, it notes that fisheries provide more than 15 per cent of the global dietary intake of animal protein; oceans and coastal areas provide invaluable ecosystem services, from tourism to protection from storms; and, minuscule photosynthesizing plants called phytoplankton provide 50 per cent of all the oxygen on Earth. See Blog for Video - "Green Economy in a Blue World-UN Initiative"

UNSG Ban however also indicated a hopeful sign: according to a 2011 scientific review which showed that, despite all the damage inflicted on marine wildlife and habitats over the past centuries, between 10 and 50% of populations and ecosystems have shown some recovery when human threats were reduced or removed.  “However, compared to the land – where nearly 15 per cent of surface area is under some kind of protection – little more than one per cent of marine environments are protected. Lately, some progress is being made, particularly with the establishment of large-scale marine reserves and documenting areas of ecological or biological significance in open-ocean and deep-sea habitats.” See Blog for Film - “Defending the Oceans: A Plan”

Rio+20 as Focus on Oceans & Biodiversity:

“Rio+20 must galvanize action to improve the management and conservation of oceans through initiatives by the United Nations, governments and other partners to curb overfishing, expand marine protected areas and reduce ocean pollution and the impact of climate change. By taking action at the national, regional and global levels, including enhancing international cooperation, we can achieve the Aichi Biodiversity Target of conserving 10 per cent of marine and coastal areas by 2020, a crucial step in protecting marine biodiversity for the future we want.” “Rio+20 – Your Future?".