Good day everyone! It’s been a month since I wrote a blog. I guess all I did for the month of August was to submit some videos. It was a busy month for me, indeed. Actually, I still got things to take care of in the coming weeks. Who runs out of things to do anyway? Okay, so I’ve been thinking of what to share for my comeback and I thought something about food would be perfect. So, let me share to you a food that I love and also one of Dagupan City’s pride, Plato Wraps!

The idea of making Plato Wraps began out of Kamela Seen’s desire to make a bread that she can call her own. It was indeed a gamble introducing an unconventional food to people. However, Plato Wrap’s founder Kamela Seen hit the lucky pot and people instantly loved the grilled bread with delicious fillings.Trying their luck with their first branch at SM Megamall, Plato Wraps has now grown several branch nationwide. 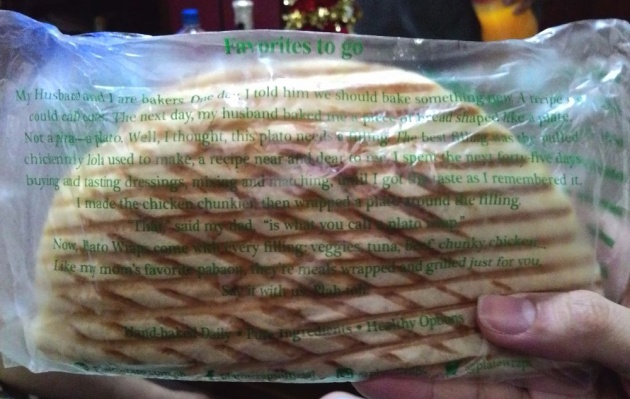 Let me share something very interesting with everyone.In addition to what's written above, there is also a special note written behind the wrappers of the bread. I’m not sure if it is still imprinted on the recent wrappers, but this one which I took a photo of was bought around 2016. The “special note” is a long text printed in green, elaborating how the founder came up with Plato Wraps. For those of you who can’t clearly read what’s written on the photo, here’s what’s written on it:

My Husband and I are bakers One day. I told him we should bake something new. A recipe we could call ours. The next day, my husband baked me a piece of bread shaped like a plate. Not a pita-a plato. Well, I thought, this plato needs a filling. The best filling was the pulled chicken my lola used to make, a recipe near and dear to me. I spent the next forty-five days buying and tasting dressings, mixing and matching, until I got the taste as I remembered it.
I made the chicken chunkier, then wrapped a plate around the filling.
"That,” said my dad, “is what you call a plato wrap.”
Now, Plato Wraps come with every filling: veggies, tuna, beef, chunky chicken…
Like my mom’s favorite pabaon, they’re meals wrapped and grilled just for you.
Say it with us. Plah-toh!

Plato Wraps is open for franchising, by the way. Although one of their requirements is for the franchisee to be a lover or fan of the product itself because they believed that to be able to sell a product, the owner must be the very first one to trust his/her product. (Click here for more details about franchising.)

Plato Wraps is a simple-looking food made with goodness and filled with joy. Their foods are always of good quality because they are hand-baked daily with pure ingredients to satisfy even the health-conscious eaters. By the way, "plato” means plate.

When ordering a Plato Wrap, aside from choosing a filling, you can also choose what type of flatbread would you like your wrap to be. You can choose from wheat bread (additional Php 10), pesto bread (additional Php 12), or their original/regular bread. As of today, Plato Wraps have 6 yummy variations of fillings to choose from: Yummy Tuna, Chunky Chicken, Ham and Cheese, Very Veggie, Wrap and Roll, and Beef Gyros!

The Chunky Chicken is one of Plato Wraps' classic filling. These are chicken breast chunks mixed in a special dressing with cucumber slices.

I dislike cucumber when I was still a kid so this wasn't my top choice back then. Just in case they bought me this, I remove the cucumber slices before eating it. (Lol) Fast forward to today, I’ve learned to appreciate this filling and they are now my favorite!

Yummy Tuna is another Plato Wrap’s classic filling. The tuna filling has tuna flakes mixed in a special dressing and slices of cucumber. A perfect snack for the fish and seafood lovers.

Just like Chunky Chicken, this is not my top choice. I dislike fishes before. Although today, Yummy Tuna is my favorite Plato Wrap! Yummy!

Presenting, one of the two bestsellers of Plato Wraps. The Ham and Cheese is another classic filling made of cube ham mixed in a special dressing and grated cheese.

If yummy tuna and chunky chicken weren’t my top choices during my childhood, I guess you already know the top choice of my younger self. Ham & cheese, of course! I love ham. I love cheese. Do I need to explain more? (Haha!) I love this filling until this day and probably forever.

The second bestseller of Plato Wraps, Beef Gyros! Beef Gyros was the latest addition to their set of fillings. It's made of tender beef chunks with greek-style sauce and sliced cucumber.

I still haven’t tried Beef Gyros since I rarely eat Plato Wraps now. But Beef Gyros looks appetizing too and its appearance reminds me of a food called shawarma. Actually, right now, I find this food intriguing. Maybe I'll try to order this on my next Plato Wrap snack.

Another Plato Wraps classic filling is the Very Veggie. Well, for Very Veggie, its ingredients are vegetables and more vegetables with olive oil, sliced mushrooms, grated cheese and tomato dressing! A perfect snack for vegetable lovers and vegans.

I still haven’t tried Very Veggie yet since the little me dislikes vegetables very much and whenever we buy nowadays, we usually buy the three classic fillings. I remember when I first saw this filling when I was still little. I was like, "What?! A vegetable Plato Wrap? No. That looks like a pizza!"

Wrap and Roll is made of beef franks, special tomato dressing and grated cheese. The flatbread is then rolled, hence, it's called Wrap and Roll. Definitely a good choice aside from Ham and Cheese when buying a Plato Wrap for your little one because they'll surely like it.

It's the filling I like next to Ham and Cheese! (Hehe)

Plato Wraps Then and Now

Plato Wraps has been in the business for 16 years already and as a former avid buyer of this food, I noticed some changes of Plato Wraps over the years.

The previous logo of Plato Wraps is just a text with a cheerful font and color combination of red and yellow as seen on the very first video on this blog. Last 2016, Plato Wraps unveiled a new logo design. This time, the logo is just a single shade of green and the text font was, well, more stylish. A line art of the grilled flatbread was now also present on the logo to make the business more distinctive. The simple white background gives a minimalist and professional look. As they say, less is more!

I believe Plato Wraps' first set of fillings were the Yummy Tuna, Ham and Cheese, and Chunky Chicken. But not long enough, they added Very Veggie and Wrap and Roll on their menu. Then years later, they introduced Beef Gyros. For their flatbread, they only have their original flatbread way back my elementary years. I was around college back then (6 to 7 years ago) when I saw them having other options like the pesto and wheat. I haven’t tried the other two flatbread yet other than the original.

Yes, a comparison about the amount of serving shall be included on this blog! So here’s a true testimonial from an old Plato Wraps fan. Going back again to my elementary years, the Plato Wraps was served with a generous amount of filling. The flatbread becomes bulky to the extent that the filling was almost spilling out. However, if you buy today, a former buyer of this snack would surely notice the decreased amount of serving. You no longer need to watch out for spilling some filling when taking a bite because the serving has now become little. And this makes me feel quite sad and a bit disappointed. I literally rant about this whenever I buy a Plato Wrap, but don’t get me wrong because I love Plato Wrap and forever will!

At present, a Plato Wrap costs from Php 53 to Php 65 or more when you opt for a pesto or wheat bread. Would you believe me if I said Plato Wraps began selling their snacks for just Php 20? Yes, and you read it right. Way back elementary again, I could buy a Plato Wrap everyday after class and still get a change from my Php 50 daily allowance. As the years went by, the prices also increased. During my college, it was already around Php 45 to 55. Well, I can’t blame them increasing the price because every product or literally everything right now had increased their price. I just wish they stick to their amount of serving like they did before. But to make up to my rants here, I say, the quality and taste is still the same like the old days. That’s what I like about them.

● The Pandaria Antonio Bakery and Restaurant

Panaderia Antonio is a pretty well-known bake shop in Dagupan City, and with their famous snack Plato Wraps, Panaderia Antonio was able to grow more. One of their first bake shop can be found at Tapuac District, Dagupan City, Pangasinan and a proof of their success is their Panaderia Antonio Bakery and Restaurant. Yes, they also serve their beloved Plato Wraps here! The restaurant is located at the Judge Jose de Venecia Highway, Dagupan City, Pangasinan, just about five minutes away from the main bake shop at Tapuac District. It’s also the only building beside the intersection leading through Dagupan City and town of Calasiao, so I am certain you will not get lost even if it would be your first time to go here. Other Plato Wraps cart branches I know within Pangasinan are at Nepo Mall Dagupan, Robinsons Place Pangasinan and SM City Rosales. They also had a food cart at Magic Club Guilig in Dagupan where I often buy but I am not sure if this branch still exists today.

● Buy One Take One Anniversary Promo

Plato Wraps also never forgets to give back to their customers. To celebrate their anniversaries in a more grand and fulfilling way, they make a one-day promo of buy one take one. On this very special day, a lot of people line up to avail this once a year promo. Who could resist a buy one take one promo anyway? Plato Wraps party all the way!

Did you know, founder Kamela Seen was among the top ten small to medium-scale entrepreneurs in the Entrepreneur Magazine for the year 2006? How cool and amazing is that? Perseverance, patience and dedication really pays off. Congratulations, Plato Wraps family!

Food cart business is one of the most popular food business here in the Philippines. Of all the foods and food cart brands being introduced to people, Plato Wraps remained strong and one of a kind. The quality of the food is still there, probably the reason why they've been strongly surviving in the business after almost two decades. Plato Wraps was a huge success for Panaderia Antonio and I believe this taco-looking bread will continue to be loved by many for more more years!

Since we're talking about food and Plato Wraps being a snack for health-conscious individuals, why not spend some moment to participate in this querlo chat about healthy life style?