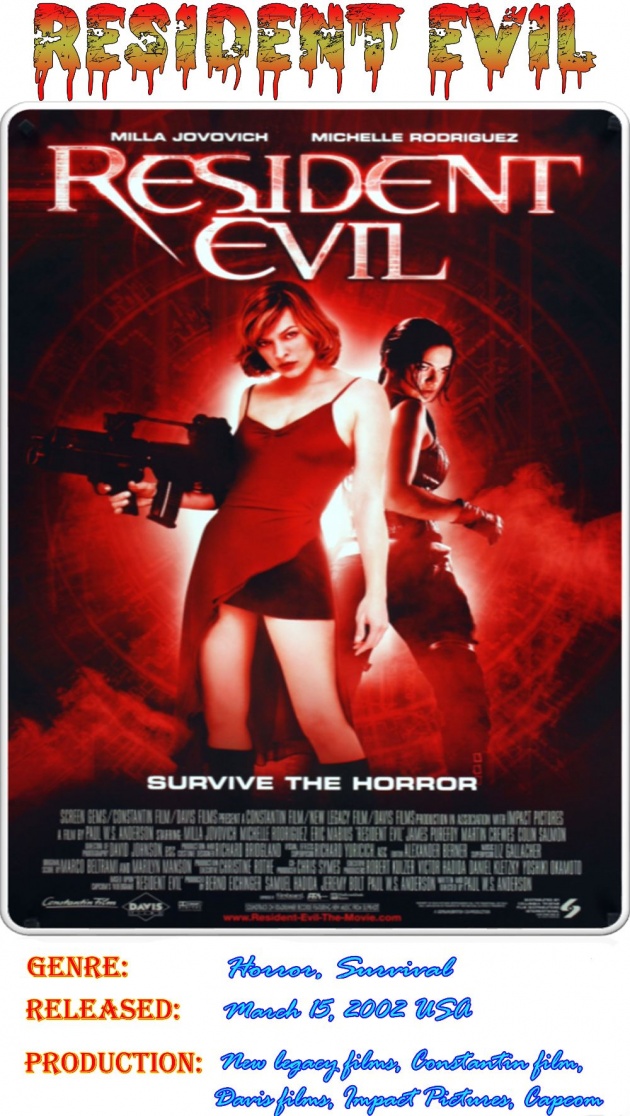 Hey guys!!! This is Alamgir again with another blog about one of my favorites, but a unique movie. It was a horror science fiction movie of 2002. The name of the movie is RESIDENT EVIL. Although the movie was made on the basis of game series Resident Evil by Capcom, but it’s exciting to watch. This movie released many sequels on this title after the succession. Here I’m talking about the first chapter of Resident Evil. So let’s start to explore this horror fiction movie in details.

It was first George A. Romero signed as director and screenplay writer of the movie. But his script was disapproved.  Capcom Producer Yoshiki Okamoto clarified that the script of Romero was not good enough and so close to the video game. So they decided to hire Paul W. S. Anderson as screenplay     writer and director of the movie. The movie was also produced by Paul W. S. Anderson and co-produced     by Jeremy Bolt, Bernd Eichinger and Samuel Hadida.

As far as Production concerns, following companies holds the rights of production of that movie.

The budget of this movie was $33 million.

There are lots of characters in the movie which are given below:

despite the whole cast, here I'm telling about some main characters.

Gorgeous Milica Bogdanovna Milla Jovovich was born in Kiev, Jovovich on 17 December 1975. She is an American actress, musician, model,. In this movie she has appeared as Alice.

Eric Harry Timothy Mabius is an American actor who was born on April 22, 1971 at Harrisburg, Pennsylvania U.S . In this movie, he acted as Matt Addison.

James Brian Mark Purefoy is an English actor, director and producer, who was born on June 3 1964 at Taunton, Somerset, England. He acted as Alice's partner in the movie as Spence Parks.

Colin Salmon is also an English actor who was famously known for his appearance in three bond movies. He was born in Bethnal Green, London, England on 6 December 1962. He appeared as James Colin in the Resident Evil.

Now after the Production, Direction and Budget of movie, let’s explore the story. The story revolves around a Raccoon City which is devastated by a zombie virus outbreak. Milla Jovovich is trying to survive and save the city from the virus outbreak. Resident Evil is a fiction horror movie based on  Survival Horror game series by Capcom. The First Chapter of Resident Evil series. So let’s explore the story in details.

In Raccoon City, Umbrella’s owned research facility exists which is called hive. It was a genetic Research Facility. Someone steals the genetically virus named T-virus that infects the facility named Hive.

The facility's fake brain power which was Red Queen, kills everybody inside the facility and seals it. Heroine Alice arouses in isolated hall with obliviousness. She was naked at that time. She then, dress herself and explores the hall. Meanwhile restrained by strange person. After that some Commandos enters the manor and arrests him. His name was Matt Addison who was just relocated in Raccoon Police Department. Now commandos tells Alice that all Commandos belongs to the Umbrella Corporation but Matt is from outside. She and her partner Spence were the guards of this facility, but Red Queen released some sort of gas and commandos wants to know that, why Red Queen closed the facility. It all happened five hours before. 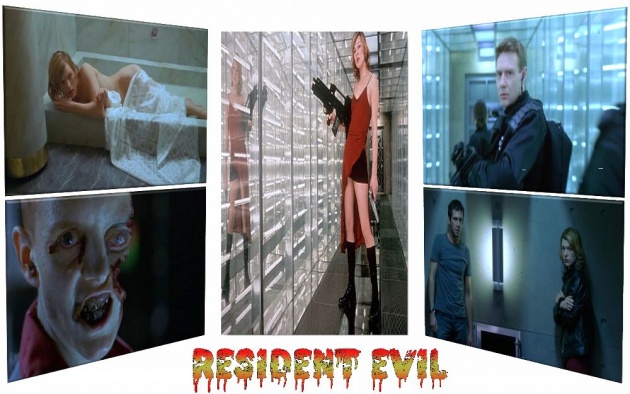 Then the group of Commandos goes towards the underground train underneath the mansion which also belongs to the facility. They finds Spence over there. They enters in the facility by starting the train. When they reaches towards Queen’s Chamber, they lost four Commandos because the area was endangered with a Laser Defense System. The leader, Colin Salmon was also killed. Red queen warned to leave that area, but Kaplan denies to leave and deactivates the power of facility by opening all the doors.

They made a big mistake and releases Zombies and metamorphosed animals. In a battle between Zombies and Commandos, Rain is bitten and J. D expires. Meanwhile, Alice regains her memories, but Alice and Matt are detached from group. Matt was trying to gather information about Lisa who was his sister. Alice was surprised to see herself because she defends herself by using martial arts against the infected zombies.

Finally Matt finds Lisa but she was infected and attacks on Matt. Alice saves Matt from Lisa. After that Matt tells about Lisa, that both of them were worked as environmental activists in the Umbrella Organization. Matt further tells Alice that Lisa was gathering evidence of illegal experiments.  Alice recalls, that she was the connection of in the facility named hive and anticipating to take down Umbrella. At Queen’s Chamber, the Survivors reunite. The Commandos tells that they have only one hour to escape from hive before it will automatically seal and they will trap inside.

In order to find the exit, Kaplan and Alice trigger the Red Queen and attire circuit breaker of Red Queen. Alice and Kaplan wanted her cooperation that is why they locks her down distantly. Escaping from tunnels, they are trapped by zombies, including reawakened J.D.  Rain was bitten twice earlier, but he kills J.D when he tries to bite and attacks. Meanwhile Kaplan is infected and he detached from the group, and they manages to the safety. 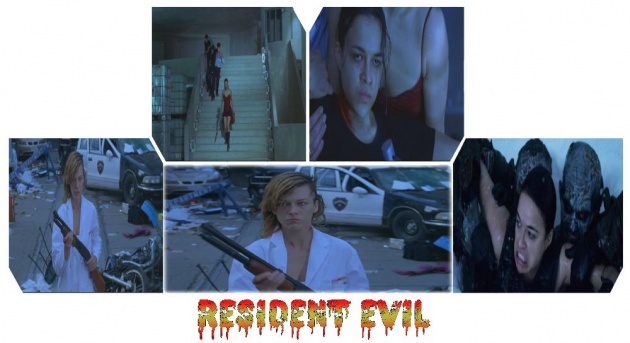 Alice recalls that there is an antivirus in the lab, but when they reach, it is lost. Spence realizes and tells that when he was attacked and bitten by a zombie, he kills the zombie and steals the virus. He covered the T-virus and antivirus on the train. However, he goes towards train and reclaims the antivirus but is trapped and killed. At the same time Red Queen deals with Matt and Alice, that she will spare both Matt and Alice if they kill Rain. Rain who was already dying and was infected from a very long time. When Licker tries to reach them, Rain says to Alice that she has to kill Licker. Alice rejects and for the moment power breakdowns. As a result the lab door opens and exposes Kaplan. They arrives at the train where Alice meets infected Spence who gets the antivirus. 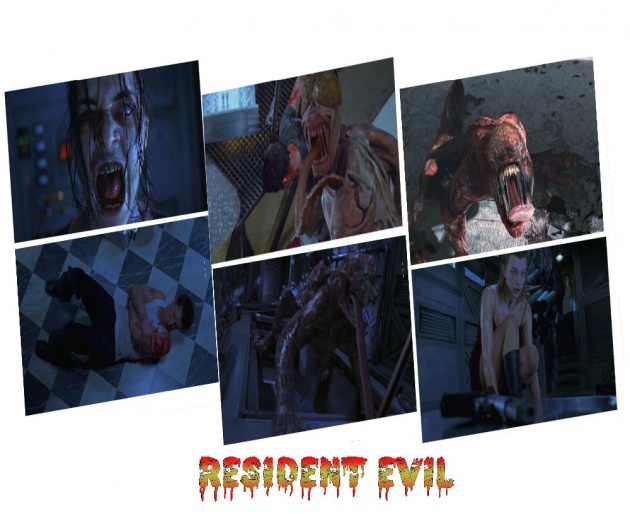 They vaccinate Kaplan and Rain with the antivirus on the train. The licker then appears on the train and attacks them, scraping Matt. The Licker grabs and throws Kaplan from the train. Matt and Alice battles the Licker. Rain changes into zombie and attacks Matt. Matt kills Rain. They drops the Licker and kills under the train by opening the hatch. Alice and Matt escapes the facility named hive before the doors close.

Now Matt’s wound starts transforming. Alice tries to give him the antivirus, the same moment, the mansion doors open and a group of Scientists and Commandos from Umbrella grabs them. They mollify Alice and takes Matt to be position into the Nemesis Program. The Scientists plan to again open the facility named hive. Alice challenges to fight with them but is whacked.

Later, Alice awakens and found herself at the examination table of Raccoon City Hospital. At that time she again lost his memory and does not know what happened to her. Escaping from the Hospital,she goes outside and finds the Raccoon City uncontrolled and tumble-down. She surprises to see the newspaper which shows that the spread of T-virus by reopened the facility hive by Umbrella, overwhelmed the city and created the undead army of zombies.Finally, she then arms with a shotgun in the end.

The Official Website was set up in March 2001 for the marketing of this movie. The web revealed that the date of release which was 26th October 2001. During the period the website upgraded with other details of the movie, like images, story, biographies of characters. The film was originally to have a Rated-R but Anderson wanted to be suited for Younger's that is why he claims to classify the movie in PG-13.

After the success of movie. Following sequels has been released with these names given below.

As far as direction concerns, Anderson has not directed the Apocalypse and Extinction, due to his other commitments but returned to Afterlife and Retribution as a director.

Music of this movie was composed by Marco Beltrami. Beltrami made some sort of metallic and synthetic music but there is no official release of the music till now.

As far as reviews concern, mostly reviews are mixed but in majority, the movie got 32%. Most newspaper critically respond the reviews that it was totally inspiration of the video game series and measured in its endlessness.

Although it was an horror survival movie and gets mixed negative and positive reviews of movie. the movie was nominated for some awards but unfortunately could not get any awards. This chart shows the details of nominated categories.

My January TBR: Six Books that I Plan to Read in January

Image Source: haraka via bitLanders In my previous blog (My 2018 Reading Goals), I mentioned that o…