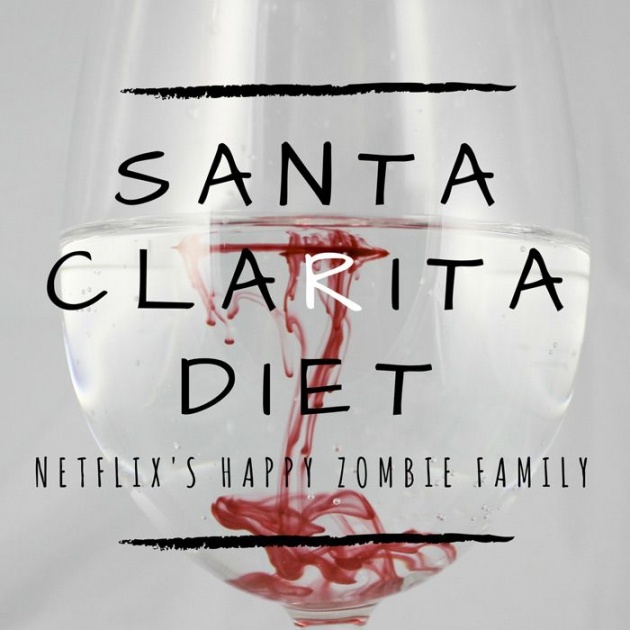 Image credits: Glass of blood by frolicsomepl via Canva.com

This is a series I hadn't considered at first, due to its title (I'm no fan of dieting). Then I looked at it more closely—and changed my mind, because this looked definitely like one happy zombie family coming to Netflix. 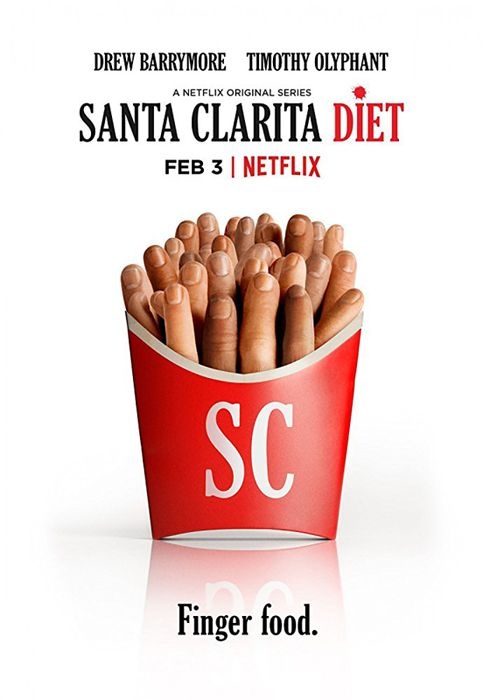 Sheila and Joel Hammond (played by Drew Barrymore and Timothy Olyphant), two realtors, are your average mid-life happy couple living in a nice suburb with their teenage daughter Abby (Liv Hewson). However, things change very quickly in the first episode, when Sheila's struck with a brutal and strange illness that leaves her... transformed. Now she's more energetic, more daring, listens to her impulses, and has lost appetite for all food except juicy, bloody raw meat. Somewhat cool? Well, there's just one thing: her heart isn't beating anymore, and it looks like she's undead.

Santa Clarita Diet is a series with horror themes (zombies, eating flesh, killing people), but it's not a horror series full of scare-jumps and gruesome murders all the time.

It deals with various day-to-day topics (Abby's troubles at school, her friendship with the neighbours' son, Joel and Sheila's mixed results in their jobs, especially after Super Talented Realtor Gary joins their team...), and, of course, with everything pertaining to Sheila's new nature as a zombie: her growing taste for human flesh instead of animal meat, the need to hunt, and the couple's conundrums when it comes to planning murders and hiding what's left of the bodies. 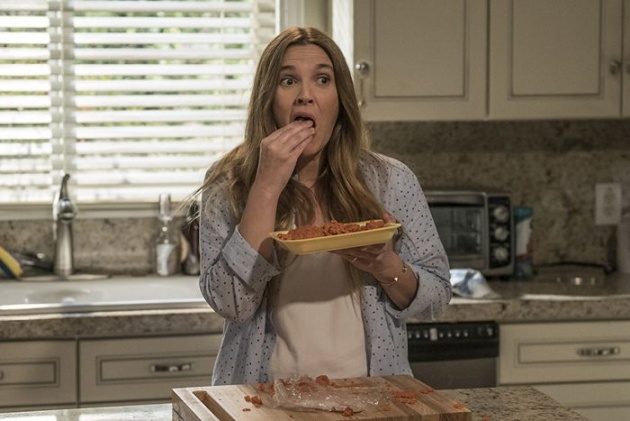 'This? Well... It's my new low-carb diet!'
Image credits: Sheila Hammond by Saeed Adyani via IMDb.com

Indeed, Sheila's newfound acceptance of her instincts comes with positive sides, when she becomes more outspoken about what's good for her family, or performs better in her job, but also, much obviously, with negative sides, such as having to resort to killing people, after a botched attempt at buying pieces of corpse from the morgue leaves her to conclude that she just can't stomach this kind of 'meat'. All along this horror comedy series, she has to learn to find a middle ground, just as her husband and daughter have to decide whether they want to keep their family strong, or run away screaming. 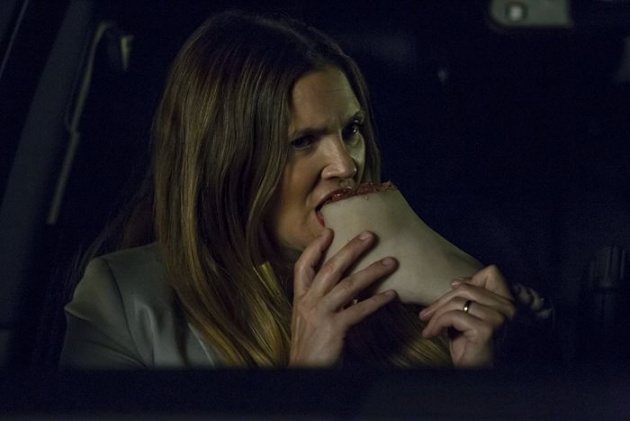 This is where I particularly enjoy this series: it mixes these serious topics with regular doses of humour—in dialogues, in situations, and even in both at the same time, all the while on a backdrop of what I'd deem typical life in a Californian suburb (at least as seen in TV series).

The overall story could easily lurch into more traditional 'brrraaaaaaains!' zombie territory, yet it never does, playing instead on a  delicate balance of callousness, morals, and down-to-earth arguments of the old married couple variety, such as whose fault is it that they don't have a garage to dispose of the bodies, due to someone wanting to convert said garage into a home office, hmm?

And let's not talk about that new freezer. 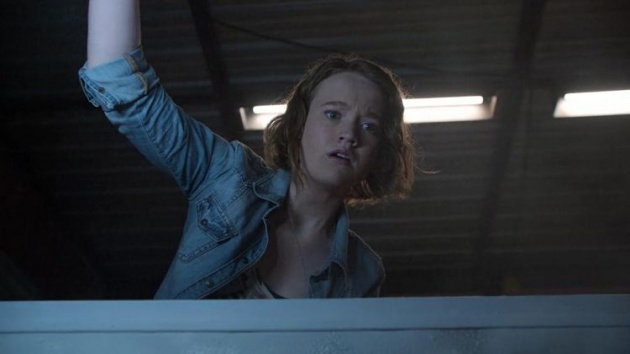 These scenes are served by the filming, too: sometimes, words aren't needed—all we need is a sudden change of scene showing Joel coming home and stepping into a kitchen covered in blood, or Abby stumbling upon her parents trying to bury a corpse in the desert. The scenes are serious and horrifying; the characters' reactions are priceless. 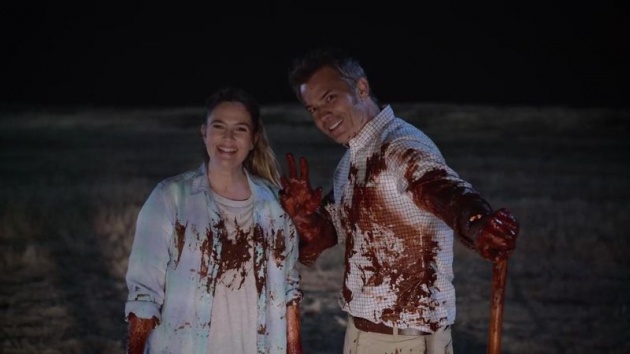 "Smile, you're on TV!"
Image credits: Sheila and Joel by Saeed Adyani via IMDb.com

These ingredients remain throughout the series, and the latter, contrary to what I thought at first when I watched the first episodes, actually manages to come up with quite a few different ideas when it comes to building upon the basic premises. Sheila, Joel and Abby have to deal with various situations, all with both a gruesome and a fun aspect. Among those, we find: 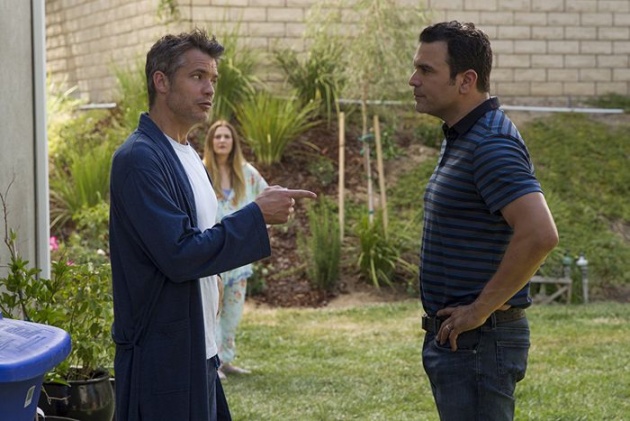 "Nothing untowards happened in this garden, I swear."
Image credits: Joel and Dan (Ricardo Chavira) via IMDb.com

Among the main characters and recurring cast, we find:

The characters are all, in their own way, quite endearing and sympathetic, even when they turn out to be 'bad guys'. Joel is genuinely in love with Sheila, and her being undead won't faze him—well, apart from a stint in the psychiatric ward, and an obsession with bookshelves. Sheila loves her family, and clearly does her best to protect it (and, well, avoid eating her husband). Abby is strong and, all things considered, manages relatively well, and remains fiercely loyal to her friends. Rick (the other cop neighbour) is a fairly laid-back guy. Eric keeps helping the Hammonds even when his own family is endangered. Loki turns to music rather than to killing. And so on.

“Our kitchen looks like the inside of a shark.”
— Joel Hammond, in Santa Clarita Diet, Season 2, Episode 2, "No Family Is Perfect"

Along with the dialogue and half-gory, half-comical scenes, these quirky characters with their sometimes absurd reactions (where 'being absurd' is just another way of avoiding full-blown PTSD episodes, I guess) soften the impact of the series' serious themes, yet never make those very themes forgettable: from the beginning, they know that what they do is bad, and that they will be severely punished if they're caught... but at the same time, all they want is to keep their family together, when faced with Sheila's inexplicable transformation that was no one's fault. 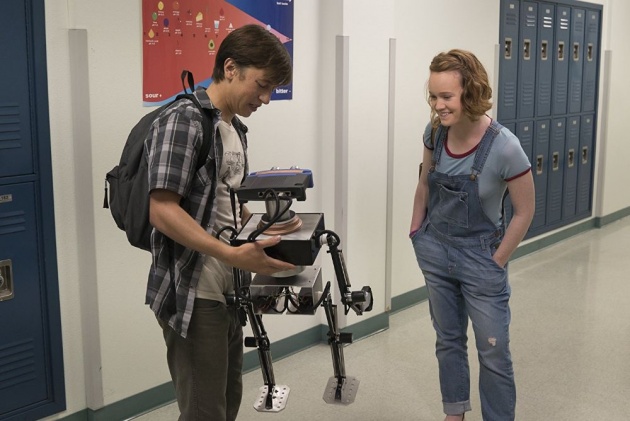 There's a je-ne-sais-quoi to these characters that makes them strangely adorable, amidst their almost daily mix of imperfect killings and hysterical reactions, and you can't help but root for them, and hope that they'll get some sort of happy ending no matter what. 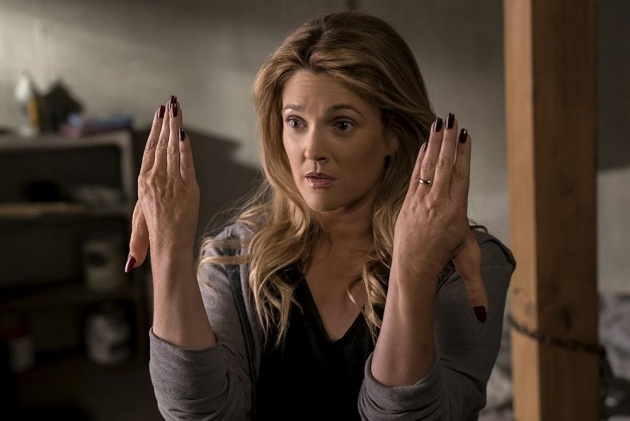 On the downside, there's maybe one too many gags based on vomit (transforming into a zombie is preceded by a huge explosion of vomit, and by this I mean that The Exorcist was tame by comparison), so if this kind of humour grosses you out or leaves you cold, these are aspects of the series that will likely make it less enjoyable.

The same applies to the gory bits—when Sheila gets at it, it ends up in geysers of blood—however, this is more expected in a series about zombies, and/or with the word 'horror' written somewhere over it.

While Santa Clarita Diet doesn't go as far into gory or weird humour territory as movies such as Zombieland(*), it is definitely a fun series to watch. The episodes are short (20-25 minutes), and different enough so as not to look like a complete copy-and-paste of each other after a while.

Also, you're likely to binge on it. But maybe do not binge on real food during the blood-filled moments.

(*) Movies being the closest comparison I can find—iZombie is another TV series, but not of the comical kind.