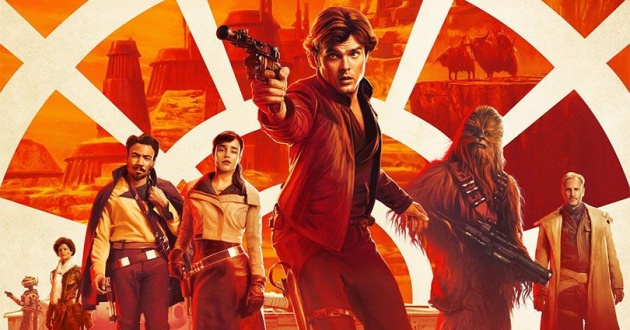 It is a lawless time.

On the shipbuilding planet of CORELLIA, the foul LADY PROXIMA forces runaways into a life of crime in exchange for shelter and protection.

On these mean streets, a young man fights for survival, but yearns to fly among the stars....

Solo: A Star Wars Story is the second spinoff film from the main series of Star Wars films, the first being Rogue One. Although Rogue One was set only just prior to A New Hope, Solo is set well before it. 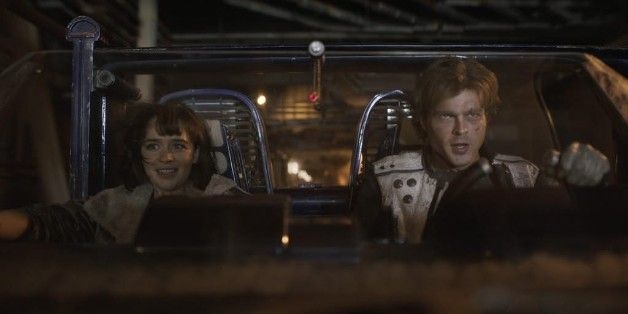 It opens on Corellia, where a young man is attempting to jack a landspeeder so that he can get away from a number of pursuers. He is successful and returns to Lady Proxima's where the young man, Han, meets a young woman, Qi'ra. The deal that Han was doing for Lady Proxima went south, but Han managed to pocket a vial of refined coaxium. Coaxium is hyperfuel, and worth quite a lot. With this coaxium, Han plans to bribe his way off planet, along with Qi'ra, so that they can eventually buy a starship of their own.

Although Han manages to get away from Lady Proxima's goons, Qi'ra is not so lucky and is captured. Looking for a way out, Han spots an advert for the Imperial forces - complete with The Imperial March (aka Darth Vader's Theme) as backing music. Han tells the Imperial recruiter that he wants to sign up, and in the Navy as a pilot. When the recruiter asks for Han's last name, Han says he doesn't have one, as he has no people. So the recruiter gives him one - Solo, as he is by himself.

Corellia looks like a really unpleasant place to live, a combination of heavy industry and urban slum. In the same locations by all appearances. When Han leaves and says he is coming back, the Imperial recruiter is surprised - for, as he comments, people who leave the planet don't want to return.

Three years after signing up and Han is a trooper in the Imperial forces, fighting in the mud. The Imperials do not appear to be doing very well, and Han's commander is blown up shortly after urging him on. Another officer, who now appears to be the ranking one, Captain Tobias Beckett, appears. Making quite an entrance, twirling his guns as he shoots them. Beckett does not look like your typical Imperial officer, and is accompanied by two others, Val and Rio.

Han also realises that there is something up with Captain Beckett, and approaches him. Han has realised that Beckett and his companions are not Imperials - and that one isn't even human (and the Imperial forces are not big on non-humans) - so he realises that they are looking to jack some equipment. A ship in fact. When Han asks to join, and then tries to blackmail Beckett into being revealed, this doesn't work, and Han is thrown into a pit to feed The Beast. 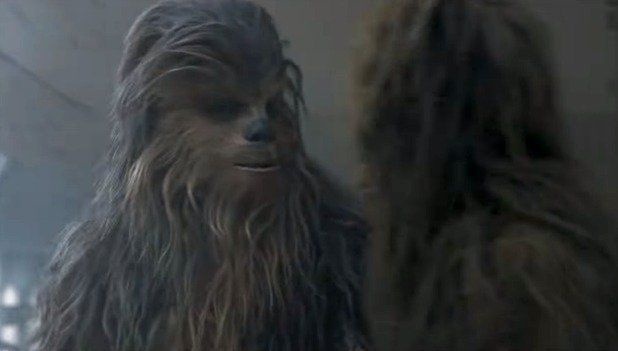 The Beast is tall, furry - and a Wookie. So it's pretty obvious that this is Chewbacca (a name Han later comments is too long and needs shortening for regular use). Both escape the pit and find Beckett and the others just before they leave in the ship they have stolen, and Beckett decides to take them along for the job.

The heist that Beckett and the others are doing is stealing a carriage full of refined coaxium from a train. This does not go to plan, mostly due to the interference of Enfys Nest and crew, a bunch of marauders who have long been a thorn in Beckett's side. With things falling apart, Beckett has to go and meet with the man who hired him for the job, and explain what happened. As there is a chance that they still might get paid, Han and Chewbacca decide to accompany him. 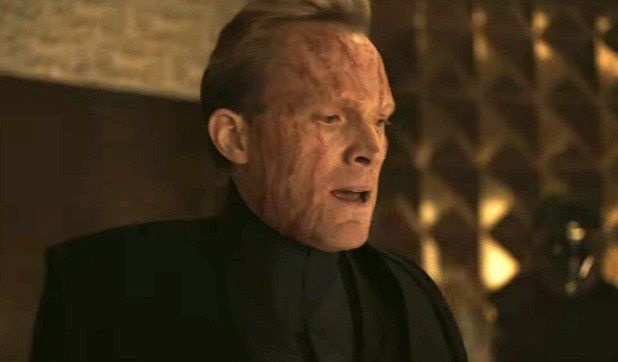 The job was being done for Dryden Vos, a crime lord in the Crimson Dawn syndicate (but not the boss; Vos, too, answers to someone, and when that someone is revealed, that may be a bit of a surprise). On Vos's yacht, Han also meets someone he knows - Qi'ra. She, too, got off Corellia, and is now part of Crimson Dawn. Getting offplanet involved doing some things that were less than savoury apparently, but which are never actually gone into. Perhaps imagination works better at inventing things here.

Vos, considering he is now out a lot of money, is surprisingly genial about it - even though it looks as if he might not be initially. Dryden wants his coaxium, and is willing to at least allow a new plan to get some. Failure, of course, will be fatal, but Vos is willing to give them a second chance - and sends Qi'ra to accompany them. 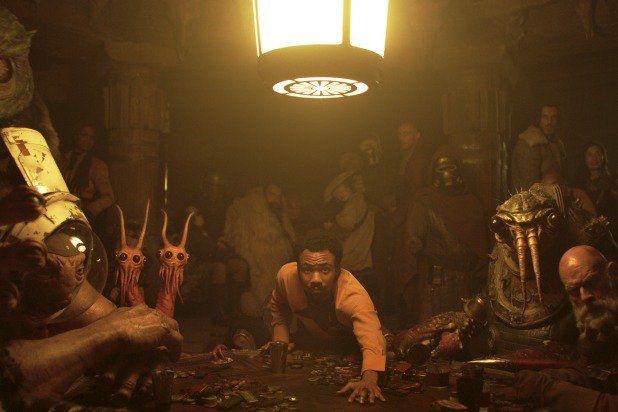 We Need a Ship

To do the job, which involves flying to the mining colony of Kessel really quickly, they need a ship. Qi'ra knows of a retired smuggler who has a ship that will do the job nicely. The smuggler is not as retired as he is supposed to be (indeed, he may actually have financial problems, going by some observations) and agrees to pilot in return for a piece of the action. The smuggler is Lando Calrissian and the ship is the Millennium Falcon. A Millennium Falcon that looks a lot shinier and in better condition that it has ever been seen before (or, rather, since). Lando's co-pilot is the droid L3-37. L3-37 is definitely a female droid, and may well be the first such seen in the franchise. She is also rather passionate about droid rights. Which causes quite a mess at one point. A useful mess admittedly.

Image Credit: Future of the Force

Sidebar: The Ship that Did the Kessel Run in 12 Parsecs

Finally we see an explanation for this otherwise nonsensical statement in one of the films. The safe journey to Kessel is a specific distance, one that is greater than 12 parsecs. The Millennium Falcon was able to take a, dangerous, short cut and substantially reduce the distance. Which means the statement makes a lot more sense (although using time would still have worked better). 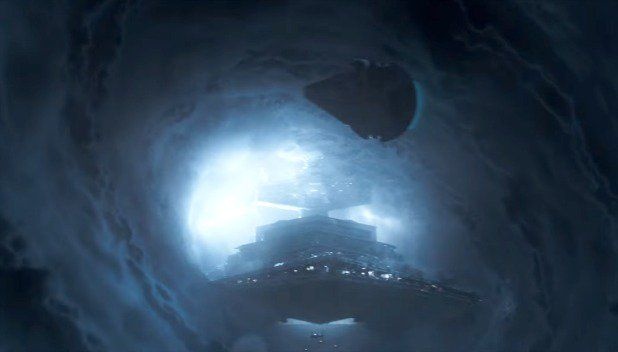 Star Destroyer and the Millennium Falcon: Image Credit The Wrap

Looking at the Action

Solo is available in 2D and 3D with the 2D version being the one seen (due to every 3D screen in the cinema showing Jurassic World: Fallen Kingdom). There are some CGI action set pieces that would work well with 3D, so 3D may have been decent in this case. However, much of the film is live action and up-close and personal, and 3D tends to be less beneficial in such instances.

The primary set pieces do look good. The first major one is the train heist, which is a tilting train that runs on a track through the mountains. There are ships, speeders and people standing on top, or sometimes on the side when it tilts, of the train. The second major one is the Millennium Falcon being pursued by TIE Fighters through the Maelstrom. There are other scenes as well; Han and Qi'ra in the landspeeder at the beginning, the muddy battle with AT-ST Walkers and combat on Kessel. The film looks good, with a combination of big and small scenes. 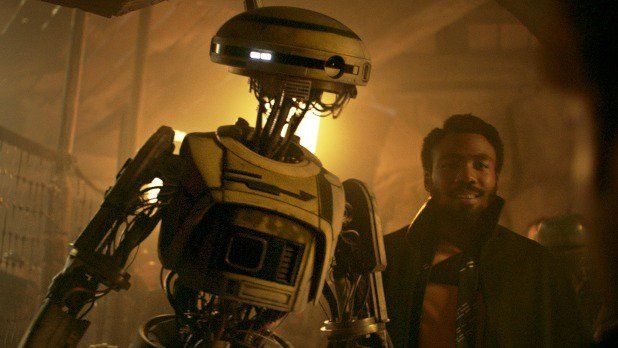 Looking at the Characters

Alden Ehrenreich - the young Han Solo - has a very difficult job to do and a very big role to fill. He has to play one of the most iconic characters in the Star Wars series, and this may be beyond difficult. It doesn't help that he lacks Harrison Ford's lopsided smile, so every time Han smiles it just doesn't look right. The young Han is less cynical than his older counterpart, and there are shards of idealism that make the actions of his older self make more sense. Beckett seems to be an older, more cynical version than either young or old Han, one without idealism or much in the way of trust for others.

Donald Glover as Lando does a fine performance, fleshing out this character more into a dandy who likes the finer things and perhaps is a bit too fond of capes. He is also fond of his navigator, the droid L3-37, even though he doesn't always show it. As in Rogue One, one of the best characters is perhaps the droid. Definitely female, very passionate about droid rights and accidentally causing a riot as a result at one point when she didn't quite think things through.

The interactions between the various major characters are interesting too. Qi'ra is clearly not the same girl that Han was forced to leave behind on Corellia. Beckett acts as a kind of mentor to Han and Chewbacca provides the muscle.

In A New Hope, Han Solo is in the Mos Eisley cantina when Greedo holds him at gunpoint and, when Han doesn't give over any money, as he doesn't have it on him, says that he's going to kill Han for the bounty. So Han shot Greedo before Greedo could shoot.

This was altered in the special edition (and then re-edited again later) so that it appeared that Greedo had fired first - and missed, at point blank range, suggesting he was a proud graduate of the Imperial Stormtrooper Marksmanship Academy. This was to make the character of Han appear not to be a cold-blooded killer. Fans were not happy.

There is a scene in Solo where Han very clearly fires first - before his opponent has even drawn a weapon. Or finished speaking for that matter. In this case, Han very definitely shoots first.

So, What Do We Have?

Solo: A Star Wars Story is a space western type of film, full of disreputable characters with quick-draw holsters and heists and jobs to earn money quickly. Set to the background of the domination of the Galactic Empire. None of the characters are truly ethical or honest, even if some of them may have streaks of being a better person. Of the two spin-off films so far, Rogue One has probably got the better story though. Solo is a much lighter film in comparison; sure, there is violence and death but not quite of the "everybody dies" vein. The characters are decent but the story could have done with a bit more work. This might be down to a large chunk being redone when the directors were changed. Given the grim nature of some of the recent films in the franchise, Solo: A Star Wars Story is quite a nice change of pace.

Sidebar: References to Return of the Jedi?

There are a number of scenes that look to reference scenes in Return of the Jedi, in particular some related to Jabba the Hutt. Han attempts to make a deal whilst holding what he says is a thermal detonator; Leia, in her bounty hunter disguise, attempted something similar in Jabba's palace. The pit where Han is thrown into to face the Beast brings back memories of the rancor pit and a helmet and mask that Beckett wears on Kessel look very like one that Lando wore when he was pretending to be one of Jabba's guards.

There's another scene where a piece gets knocked off the Falcon, which is similar to Lando clipping the dish off the top off the ship inside the second Death Star.There are more Easter eggs of course.