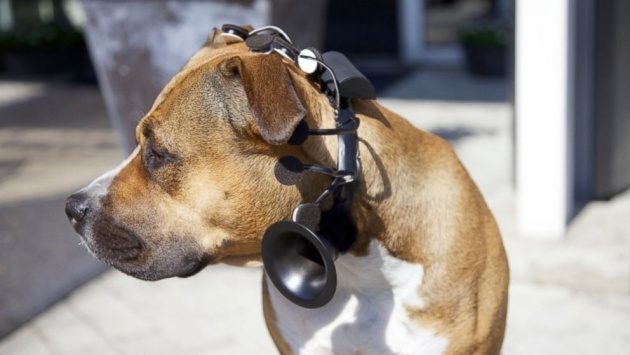 What if your dog could greet you with more than a growl, or announce the reason he's scratching at the door?

It sounds absurd and much like the storyline from the Pixar film, “Up,” but Scandinavian scientists are working to develop a headset that could soon allow your furry best friend to speak his mind.

The Nordic Society for Invention and Discovery is the brains behind “No More Woof” -- technology that aims to distinguish canine thought patterns and then issue them as short sentences via a microphone.

“The brainwaves differ quite a lot from different races as well as individual dogs,” NSID writes on their website. “However it is possible to detect some common patterns and we have no doubt that in the future this technology will open up a vast new era of communication between dogs and humans, or animals in general and humans.”

The research team, who previously brought the world such inventions as the pet flying carpet, weren’t immediately available for comment on Wednesday, but explained the most recent project on their website.

The operating system relies on sensors in the headset which detect electric signals in the dog's brainwaves. Technology from an in-built processing device then analyses the signal patterns and deciphers them into distinct feelings like anger, curiosity or tiredness.

Sample sentences such as “I’m hungry – but I don’t like this!” or "I'm curious who that is?" will be programmed into the device and emitted through a loudspeaker.

English translations will be available, but Putonghua, French and Spanish language headsets will come later, the researchers say.

How exactly scientists will attach the sensors into a dog's brain has yet to be ironed out. Issues like this, as well as the ethical and social concerns, are the reason why there’s a whole lot more research to be done before the technology becomes available.

The headsets are, however, available for pre-purchase on indiegogo as part of the research funding campaign, with three different versions that range in functionality and price, from $65 for the micro to $300 for the standard version or $1,200 for the Superior customizable mini-speaker, replete with engraved dog tag.

You might have to wait a while for the first prototype to arrive in the mail, but the implications are enormous, the researchers say.

And as friendship is a two-way street, it’s only fitting that the scientists are also aiming to develop a reverse headset for humans to bark their way into the hearts of their canine buddies.

Other applications and accessories the researchers have in their far-sighted future include a “Pavlovian training kit,” with original instructions by the physiologist Ivan Pavlov, to further the owner-pet bond through the use of play and classical conditioning.

“Right now we are only scraping the surface of possibilities,” the researchers write. “The first version will be quite rudimentary. But hey, the first computer was pretty crappy too.”