Capitals over the world are known for their beauty and cleanliness, no wonder the most beautiful cities are the capitals of their particular countries such as Paris, London, Canberra, Cape Town and all others. With organized systems, limited population and proper sewerage. On the other hand there is Kabul, capital of Afghanistan. The city, originally built to accommodate half a million people has exceeded more than 5 million today. The overpopulation and overcrowding has created many issues that are more than challenging for the West-funded democratic government and it seems despite all the media attention and international survey reports the government officials haven't been able to come up with an achievable solution. 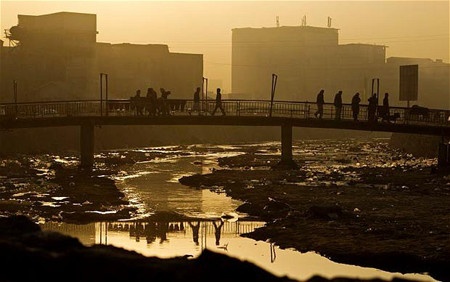 The issue I am highlighting in this article is the poor sewerage system in Kabul, during the spring showers, human filth gradually mixes with the dust on roads and turns into mud. A day or two later the sunshine dries the mud and the mixture flows into wind resulting in the inhalation by all the population especially in the crowded areas. The contaminated dust has been responsible for many dangerous diseases while the human filth absorbed in land also contaminates the water and as a result causes other diseases, TB has become very common in Kabul lately.

According to Prince Mustafa Zahir, the director of Afghanistan Environment Protection Agency, a considerable part of it goes into air. "According to the lab reports, "the Kabul's polluted air contains 32 percent human waste, in the form of powder". Well in other words, those who live in Kabul, literally eat "shit" on a daily basis without knowing it.

It indeed is a big concern particularly for the authorities in government. Now the question remains, "How are the authorities going to solve this issue?". Around 3 years ago,  "The action plan of Kabul city's canalization projects had been finalized, the estimated budge was 850 Million dollars". With the huge corruption on the higher level, I believe these ministers would rather eat shit than implement the particular projects.

According to a report, "Mayor Nowandish was not sure how his city shapes up compared with others in overall pollution. But he said its PM 10 count two years ago was 250 micro-grams per cubic meter of air, and this year it dropped to 190 micro-grams, "That's because we paved a lot of roads and we planted a lot of trees, and those initiatives brought down pollution a lot, he said".

The International community has also provided funding and machinery to dispose off the waste which makes me curious, with the population and pollution growing higher day by day, will this little effort make a big change?